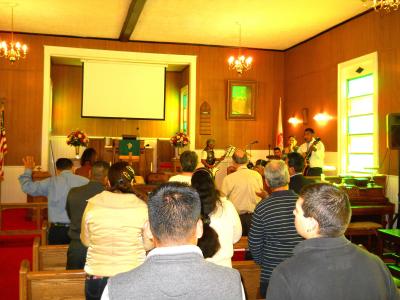 At that time Miranda knew of no Latino community in the area. But as Miranda said, that’s when God sent her angels: Bob and Carol Jones, an Abingdon couple who took her to the immigration offices to help her change her visa.

“They introduced me to this Methodist church,” said Miranda. “They are the ones that gave me all the help I needed, in all sense of the word, to begin this ministry.”

A 2007 study by the Pew Hispanic Center predicts Latinos will bring some important changes to the American church, due to the growth of the Hispanic population.  The changes started because of the need for services in Spanish for a mostly Latino congregation.

A 2006 study by the University of Notre Dame’s Institute for Latino Studies said Latino churches provide the largest volunteer workforce in their communities. According to the report, “Leadership Matters: The Role of Latino/a Religious Leadership in Social Ministry,” churches also serve as learning environments to help people gain skills that are important for leadership and civic involvement.

The Leadership Matters study says immigrants rely on churches to meet people of similar social, cultural and economic backgrounds. These churches give immigrants the opportunity to lead Bible-study classes, work with others on church committees and gain other skills that can be used to help them adjust to American life.

The need for Spanish-speaking ministers is growing in America because of the number of Hispanics in churches. If a church could not find a minister in the United States, they may bring one in on a missionary visa.

Methodist churches looking for missionaries go to The General Board of Global Ministries for help.

“If we know of a district that is in need of a missionary, we have a list of people who would like to come in for missionary work and we pick from them,” said Glenda Roberts of the General Board’s New York office.

In the United Methodist Church, the search starts with a pastor.

“Let’s say I went over to a farm and saw that there was a missionary need for those people. I would bring it to the attention of my district superintendent,” said the Rev. Will Shewey, of Salem United Methodist Church in Kingsport, Tenn.

His request would then go through two people before going to the global ministries offices, which would send a missionary if there were a need.

For some churches, like Iglesia Bautista La Gran Comisión in Morristown, Tenn., bringing in missionaries is more than just help for the church. The missionaries also help the surrounding community.

“The two [missionaries] we brought in, one especially, have worked in the community,” said the Rev. William Burton of La Gran Comisión. “She’s bilingual and worked in the Latino community for government agencies like Douglas Cherokee [Economic Authority] and served as a translator in the school systems, and of course she was not paid by those institutions but was compensated by the church.”

The economic authority and the school system allowed her to connect with the community, become more accustomed to American culture and help the church.

“It provided a great opportunity for her to learn more English and also for us to connect with the community and learn the basic needs the Latino community has in the school system and early childhood care,” said Burton.

For Yolanda Miranda, the visa not only gave her the opportunity to help the Latino community around her, she learned from the experience as well.

“When I finally received my visa as a missionary and I learned how to drive, I began to go out in the fields, literally the tobacco fields, and the milk farms, and other farms to go pick people up,” said Miranda (pictured at left).

Miranda took the van she had been given by the Jones family and picked up the people she found in need of her help. As she got to know them, she realized the many needs of the Latino community.

“I began to learn of their financial problems,” said Miranda. “Some were sick and couldn’t  get to the hospital. They were living in inhumane conditions. And that’s how I began my work as a missionary.

“I took food to them, blankets, heaters,” she said. “Lots of them lived in the barns of some of the farms. Some lived in trailers without electricity. So this is the way I began working with them. I even helped them search for jobs. This was my way of introducing the Lord to them.”

With the religious worker visa Miranda was able to stay in the country, gaining a chance to grow in her faith while helping others in theirs.

Burton says there is still a need for missionaries but it is declining in this area.

“We’re transitioning into those second and third generations, which are children who came here at a very early age or were born here,” he said.

“And we’re raising a new generation of bilingual people. So right now I think we’re on the edge of that becoming less of a need because our churches are a little more established, and we’re raising up leaders here that are able to do that without us bringing people in from another country.”