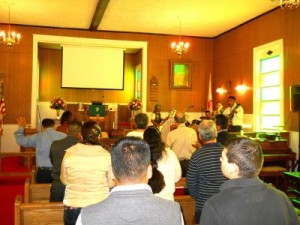 JOHNSON CITY, Tenn. — Yolanda Miranda welcomes her Sunday morning congregation with hugs and handshakes. She seemed to know all 20 members at Manantial de Vida United Methodist Church.  Miranda came from Costa Rica to Abingdon, Va., in 1990, later changing her visitor’s visa to a religious worker’s visa as she began missions work. At that time Miranda knew of no Latino community in the area. But as Miranda said, that’s when God sent her angels: Bob and Carol Jones, an Abingdon couple who took her to the immigration offices to help her change her visa.