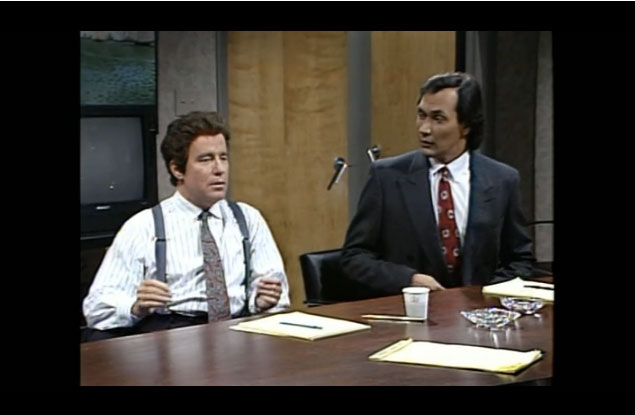 Jimmy Smits as Antonio Mendoza in a Saturday Night Live skit which is an example of Hyperanglicization in Mock Spanish.

The Mimbres, NM – OK.  I officially can’t take it anymore. I heard Andrea Mitchell, MSNBC’s chief foreign correspondent, say “ma-kismo” (machismo) on air this week. I did a double take. What did she say?  What was she trying to say? And she is the FOREIGN correspondent? Ever since the presidential election, news media have been interviewing Hispanics and mispronouncing their names.

For years I have listened to many Anglos speaking Spanish and perceived a sound like chalk scraping against the blackboard. I did not grow up speaking Spanish, and to this day I am not fluent. I sometimes mispronounce words, but as a colleague in Guanajuato told me many years ago, “You don’t understand Spanish as well as you speak it. It is usually the other way around.”  Or words to that effect. Jimmy Smits as Antonio Mendoza in a Saturday Night Live skit which is an example of Hyperanglicization in Mock Spanish.

How can a person in the media not take the trouble to learn the basics of Spanish pronunciation. It is relatively easy, much easier than English as a second language. If you know a few rules and see the word written, you can pretty much say it. But, I have heard newscasters in El Paso, a city more than 80% Hispanic mispronounce. I have heard Soledad O’Brian on CNN mispronounce. Soledad? And many more too numerous to recount. We even had to teach a UTEP professor who grew up in SOCAL how to pronounce his own surname!

The Hispanic population is the largest “minority” in the U.S. and growing. Don’t we make a good faith effort to pronounce Chinese names, Polish and Russian names, Jewish names? Why can’t we make an effort to pronounce Spanish surnames, and other common words now in our lexicon of greetings, food, and other arenas of daily life? Wasn’t it several years ago now that salsa outsold catsup/ketchup?

There is a now retired linguistic anthropologist at University of Arizona (remember Tucson is the place where classic books by Latino authors have been banned) who has a definitive answer to the question. Her name is Jane Hill (no she isn’t a radical Chicana) and she says the answer is racism. She says the mispronouncing and the making of jokes and the naming of streets and things on menus and advertisements are on purpose, largely derogatory and meant to demean.  These linguistic utterances are designed to let everyone know that you, yourself, are not Hispanic, and would never want to be.

The first article I ever read by her was called “Hasta la Vista, Baby,” the line from the Arnold Schwartzenager (which no one ever pronounces poorly, well maybe the last a) movie, The Terminator.  I highly recommend it.  You can find it in the Critique of Anthropology (13(1993):145-176).

Last week I was in a grocery store in Bayard, New Mexico. Bayard is an old mining town that is largely Hispanic and adjacent to the Santa Rita Copper mine. I was in the produce aisle, looking for spinach. The produce guy was there. He was himself, Hispanic. I asked him if there was spinach. He immediately went into a diatribe about the “beaners in Bayard” who only wanted their iceberg lettuce and jalapeños, whereupon I reached in front of him to get my own jalapeños. When he finished his rant, I said “ni modo.” It was then he realized he had gone off on the wrong gringa. Hurriedly, he said that I must have some Mexican in me, and I said “pos sí.”

How many of our young people Anglicize their names because they get sick of gringo mispronunciations or they have internalized the racism directed against them and just want to fit in? Miguel becomes Mike, David becomes Dave, Teresa becomes Terri, and Candelaria becomes Candy.

I urge you, all of you, to check out Jane Hill’s work.  You can start here or here:

I also invite you, especially if you are an Anglo in the media, to take the time to learn the basics, to respect the language and the culture. If you are Hispanic or black, learn standard English as well. It’s just the smart thing to do.

3 thoughts on “Gringos speaking Spanish badly; what does it mean?”