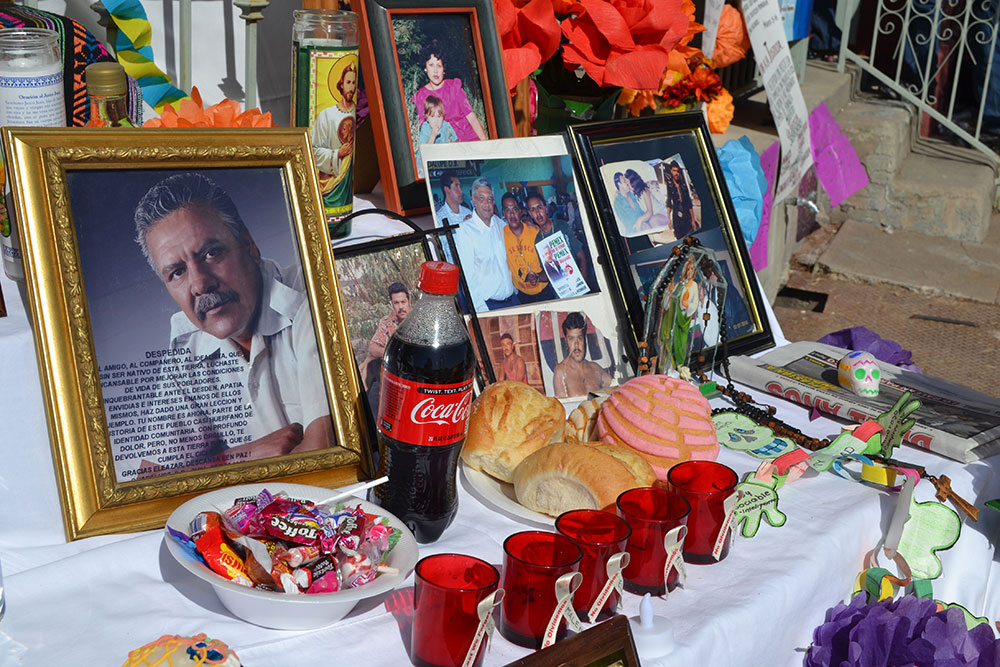 Pan dulce and candies to honore the victims on violence in Juarez. (Krystle Holguin/Borderzine.com) Pan dulce and candies to honore the victims of violence in Juarez. (Krystle Holguin/Borderzine.com)

EL PASO – An altar with pan dulce, candles, and fruit baskets placed next to photos of the dead honored the victims of violence in Juarez on this year’s Día de Los Muertos remembrance.

Early Friday afternoon, Nov. 2, a mother wept as she stared at the photo of her 15-year-old son, murdered in Juarez, Mexico, in drug-related violence. She said her son was shot at his own residence. About 30 other photos of persons who were killed or who suddenly disappeared were displayed on the altar The altar, built by members of Mexicanos en Exilio, was located on Yandell and Newman. (Krystle Holguin/Borderzine.com)

Laughter and sobs were heard as family members remembered their loved ones. Several Mexican flags blew steadily, symbolizing their cry for the Mexican government to stop the violence.

Immigration attorney, Carlos Spector, gathered members of the well-known foundation Mexicanos en Exilio for a press conference on the corner of Yandell and Newman, to share their stories of family members assassinated in Mexico as a result of the drug war.

“The U.S. government denies 98 per cent of most Mexican claims and the corruption and impurity in Mexico make arrests of assassins almost impossible. So we have two governments presenting obstacles for justice, but the organization continues to fight for what they can,” said Spector. He said he has won only four or five asylum cases for the 73 families he represents.

Mexicanos en Exilio is a non-profit organization dedicated to helping those forced to leave Mexico because of the Mexican government’s failure or unwillingness to protect them according to their online website. These individuals include reporters, photojournalists, political activists, human rights activists, businessmen, and former members of the law enforcement. Saúl Reyes Salazar, who is a founding member of the group Mexicanos en Exilio, said that he used this day to remember six of his loved ones who were political activists and well-known members of environmental groups.

“We cannot go back to Mexico because our lives are in danger.  We could be killed if we cross over to Mexico. We can’t even visit our family’s graves or take them flowers if we wanted to, so we do it symbolically here because this is the only way,” said Reyes.

Reyes also said that he hasn’t had any help in any of these cases since they were closed. There is no investigation of responsible parties involved, he said, and the murderers remain free.

More than 40 persons attended the event, making it clear that no one and nothing could get in the way of attaining justice for their lost family members.

The altar, built by members of Mexicanos en Exilio, was located on Yandell and Newman. (Krystle Holguin/Borderzine.com)

Pan dulce and candies to honore the victims on violence in Juarez. (Krystle Holguin/Borderzine.com)

A tomb was erected to remember the seven members of the Reyes Salazar family that were victim of the violence in Ciudad Juarez. (Krystle Holguin/Borderzine.com)