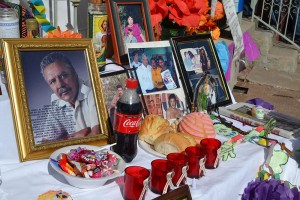 EL PASO – An altar with pan dulce, candles, and fruit baskets placed next to photos of the dead honored the victims of violence in Juarez on this year’s Día de Los Muertos remembrance. Early Friday afternoon, Nov. 2, a mother wept as she stared at the photo of her 15-year-old son, murdered in Juarez, Mexico, in drug-related violence. She said her son was shot at his own residence. About 30 other photos of persons who were killed or who suddenly disappeared were displayed on the altar

Laughter and sobs were heard as family members remembered their loved ones. 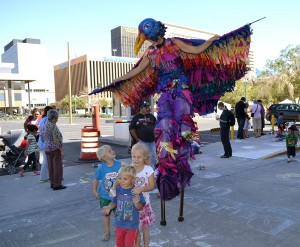 EL PASO – On his hands and knees, local artist Matthew Kohls chalked the sidewalk and described the portrait of a man he was creating on the grainy concrete as art in search of the truth. Kohls says that although he is new to the art world, he developed a passion for art and photography at a young age and was encouraged to pursue his dream by his cousin Diego Martinez, who also participated in the art event. Some 200 artists participated in the 5th annual Chalk the Block in downtown El Paso. Kohls said that he concentrates on composition more than anything else using the “rule of thirds” as a core principle to inject life into his work. Organizers said that more than 37,000 persons attended the event October 12-14, which included the sidewalk chalk art, live music, food, art vendors, and some aerialists performing on stilts.