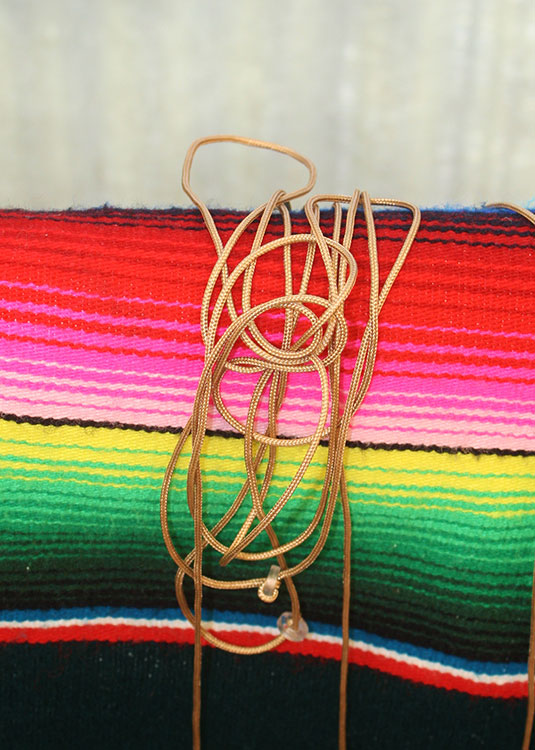 Bamboo roll-up shade tying itself in a knot. (Cheryl Howard/Borderzine.com)

MIMBRES, N.M. – Why is it that necklaces, bamboo roll-up shades, and extension cords tie themselves up in knots without any help, and intentional knots are so difficult to learn?

Since I started making jewelry, I have tried several pendants that are more masculine, or at least earthy, and I wanted to use leather cords rather than metal chains to complete them.  First I took a lesson from Roberto Santos when I made pendants for the drum circle guys. He taught me one way to make the knots so the laces slid up and down to adjust in length. I could do it right then, but I couldn’t do it a few days later when I was working on something else. Bamboo roll-up shade tying itself in a knot. (Cheryl Howard/Borderzine.com)

Next, I took my problem to a luncheon at the Sociology and Anthropology department at UTEP. I figured one of the anthropologists could help me. One of the students, José Castañeda, indeed knew how to make these knots and luckily I was sitting right next to him. His method was a bit different than Roberto’s though. He patiently showed me and watched me practice until he was satisfied that I knew what I was doing.

And I did. Know what I was doing, that is. Until a few weeks later, when my fingers refused to do it right the first time. I kept tying and tying knots until they looked right, and I knew when they looked right, but my fingers were learning all the wrong ways along with the right one.  And now I knew there was more than one right way. I had always taught this message to my statistics students, but it was coming back to me, not as a solution, but as an additional problem. Now I understand why some of my statistics students felt murderously angry instead of liberated upon being told there was more than one right way. Sliding knots the way they should lhttp://borderzine.com/wp-admin/post.php?post=13576&action=edit&message=10ook... and work. (Cheryl Howard/Borderzine.com)

The next time I needed to make these knots, I went to the Internet where you can find short videos of people showing you how to tie these sliding knots… Oh no… In a variety of ways. I follow one person over and over until I have successfully tied enough leather cords for my upcoming arts and crafts fairs. Unfortunately, I still don’t know what I am doing. Really.

I am a kinesthetic learner. I learn by doing and doing and doing. The problem is that if you keep doing it wrong, that is what you learn. And you are unable to distinguish, except at the end, when you are doing it right and when you are doing it wrong. That is why good teachers are so important, whether it is learning to drive, tie knots, or do statistics. It is important to practice doing until it becomes a knowing you don’t have to think about. And all the wrong ways have to be extinguished, no longer a part of the pattern of doing. If we are speaking of manual skills, it is more like a visceral knowledge. Maybe something of the same sort is at work with cerebral tasks. After all, the brain is a muscle just as the biceps is. Here I imagine the phrase, “use it or lose it.” Arts and crafts fairs require additional knots, even when the vendors are not selling jewelry. There are knots between the weights and the canopy to consider.  These 10’ by 10’ tents have a predilection to fly away in the wind, without being weighted down. I had previously made two weights by pouring cement into big ice cream buckets and putting eye hooks in the cement to attach to bungee cord or ropes. These worked well until the handles on the ice cream buckets came off (cement is heavier than ice cream) and then there was an issue with the legs of the tent that the eye hooks didn’t really solve. I saw one vendor who successfully tied a rope around big rocks and then tied another rope from the rocks to the frame of the tent, so I tried doing the same thing. I had plenty of big rocks, and bought plenty of rope. But, as in any endeavor, there are tricks. There is a special kind of knot that allows you to take up slack, adjust to the height of the tent, one thing you need when you want the tent to be secure. I did it a couple of times right, a couple of times wrong, and couldn’t have taught any other person to tie this knot. I didn’t even know which way to do it myself in the end. I don’t even know the name for this knot; I just know it exists. And, of course, my rocks worked okay the first time and then the ropes slipped off of them, and they needed to be retied if I wanted to use them again. Seriously, knots in the physical sense are real in and of themselves, but they are also metaphors for the knotted aspects of our lives:  the untangling our past, freeing ourselves from the bondage of negativity, of habit and addiction; the tying of ties, tethering ourselves to what is important; the learning of new skills regardless of age, the sailing away on boats where knots might mean a difference between life and death. Fortunately, for me, I am confident I will learn. I am persistent and I will not take a sword to my metaphorical Gordian knot. I will find a scout manual at some garage sale and figure out, once and for all, how to tie the two knots I am in most in need of knowing. I will do it until my fingers know instinctively what to do. I will extinguish all my attempts that end in failure. And I will check in again with my soul to see what aspects of my life need tying and what aspects need untying.

Sailing knots will have to wait. I am not sailing away just yet. Hinges are next on my list. And the knots that tie themselves in the roll-up shades, necklaces, and extension cords? Well, we have to allow for some mystery in the world, no?