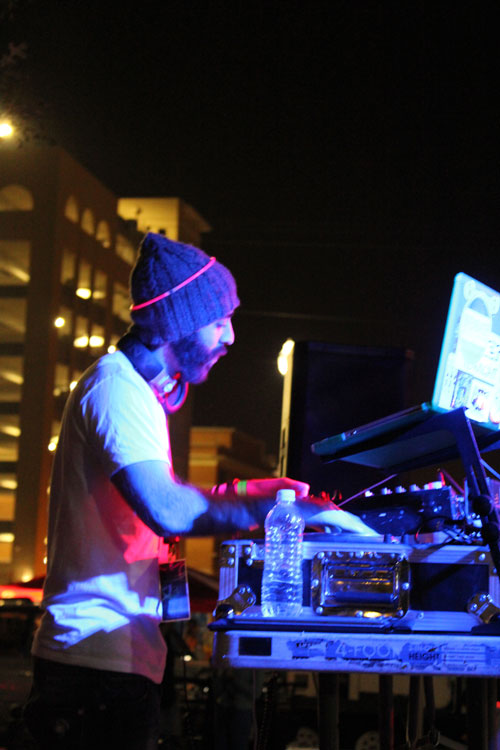 EL PASO — Whether they were dressed as a banana, boxing champion, a huge hand flipping the bird, or just plain decked out in glow sticks, one thing was certain, they celebrated the first Halloween of its kind running through downtown.

Thanks to Downtown Glow, the first annual event by Flow Entertainment, El Pasoans had a place to celebrate Halloween in a healthy, fun and bright way. The event took place on October 31 on one mile of closed streets including Oregon and Main. “We had seen this concept in other cities and saw that it was very successful,” said Crystal Bocanegra, co-founder of Downtown Glow.

After seeing an event like this in Las Vegas, Crystal and her husband Alby decided to use their experience in event planning to create one where participants could enjoy what their own city had to offer.

Downtown Glow began with a mile-long Funrace that allowed participants to either walk, run or bicycle while decked out in glow sticks and other glow gear. Participants ranged from ages three to 50, and attractions at the event catered to all ages.

“Downtown Glow is for everybody, you can be 45 years old, or you can be five years old, you’re gonna have a good time,” Alby Bocanegra said.

Kids who didn’t want to participate in the mile Funrace could play on the jumping balloons provided by the local business Jungle Jaks. It was another fun way to get exercise.

“We wanted something different, something new with a health aspect. And we’re not okay with the negative publicity El Paso gets with being a fat city. We don’t get a lot of love on our downtown either,” said Alby Bocanegra, CEO of Flow Entertainment. After the race, participants were able to purchase refreshments and food from local vendors like El Paso Red Hotts, The Pizza Joint, and more. Every vendor there offered at least one healthy food item from their menus. However, the crowd was really there for the music.

“This is a great event, I didn’t get to attend the race because of work, but luckily I’m making it on time to see most of the DJ’s, especially Diplo. I’ve never seen him, but I hear awesome things,” said Luis Aguilar, who glowed green and purple. Amer, also co-founder of Project Freedom, even participated in the race hoping to spread awareness. “We believe in the power of numbers and great people accumulated for a common purpose. Right now our common purpose is to promote freedom for everybody in the world, but in particular regionally Juarez and back home for me, Syria,” said Amer.

For many groups, such as Project Freedom and Joe Moody’s campaign, Downtown Glow was a positive way to gain support by showing support.

“We’re partnering with our friends here at Flow Entertainment and we wanted to march and fight for freedom and spread awareness through music, because that’s what we are; we’re artists as well,” said Brenda Amador, Project Freedom co-founder.

Team Moody consisted of State Representative Joe Moody, some family and a handful of his campaign volunteers. They walked the race and proudly wore their glow gear as they marched with orange ‘Moody’ signs.

“We came down here because we like to support events in Downtown. We want new and good things going on in downtown El Paso,” Moody said.

While the glow sticks from Downtown Glow may have faded out, the memories and support towards El Paso’s local talent and businesses still burns bright in all its attendees.

“It was so much fun and I think it’s awesome; they supported so many local businesses. I think that’s why it was such a success. When you support El Paso, El Paso supports you back. I can’t wait until next year,” Aguilar said.