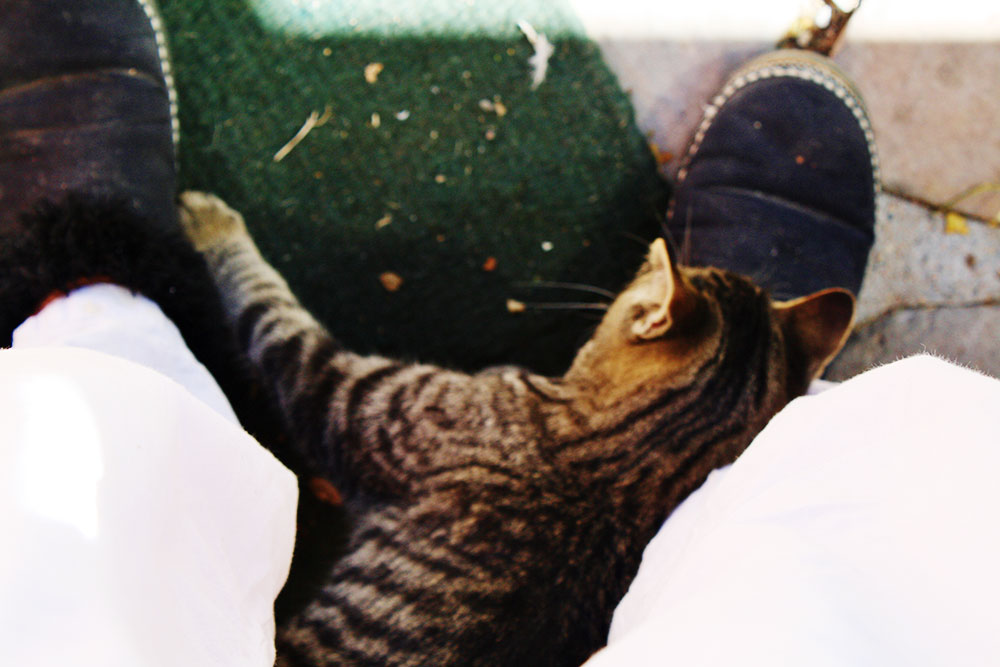 MIMBRES, N.M. –There is an old dicho from England, “it takes a thief to catch a thief.”  The theme seems to be a popular one. In 1955, Alfred Hitchcock directed a film titled To Catch a Thief starring Cary Grant and Grace Kelly. Then a series of TV shows emerged with the same premise: It Takes a Thief, Remington Steele, and more recently, White Collar.

Not too many thieves here in the Mimbres, but there are lots of critters. I can hear the cows lowing in the morning, the roosters crowing and hens clucking. Sometimes the coyotes yip in the early morning, but mostly you can hear them at night. Deer are both morning and evening visitors. Idyllic? Maybe. But there are other critters. The ones humans don’t like to deal with: rock squirrels, skunks, and feral cats. And those are just the mammals.

Rock squirrels are not those fluffy tailed cute things that spend their time in trees and bury walnuts in places they can’t remember. Rock squirrels chew through wiring and wreak havoc. They are unwanted pests and have funny feet.

Skunks are generally compatible with nice gardens since they eat pests like squash bugs that can decimate a squash plant in a couple of days. But… they also stink… and carry rabies… and eat cat food, chicken eggs, plant scraps in the chicken yard, whatever is available. They dig little tunnels at night under gates and fences they want to get into. There are a few families of skunks that live around UTEP, and sometimes you can see them coming out of a night class or the library after dark. Sometimes you can only smell the evidence their presence. Marion with one of her chickens. (Cheryl Howard/Borderzine.com)

Before coming here, I had almost zero experience with skunks and rock squirrels. My dogs got “skunked” once when we were camping and I had to rub tomato sauce all over them before anyone could go to sleep. But, I have a lot of experience with feral cats, or rather my daughter does. My crazy neighbor feeds both wild pigeons and wild cats, and my daughter rescues kittens from at least three litters a year, taming and taking pictures to post on Craig’s list. She finds responsible homes for these creatures whose mothers have no choice but to have them and are themselves, untameable.

Imagine my not so surprising surprise upon coming to the Mimbres. A litter of four feral cats with no mama cat in evidence. The old cat that was entrusted to me to feed had been invaded by these hungry kittens. So now they are my problem, eating cat food meant for a tame old cat. My neighbors, Jamie and Marion have two traps: a rodent trap and a skunk trap. The rodent trap is set next to the Evergreen shipping container storage units they have back of their house. I got to see close-up the rock squirrel that got trapped one day. It almost didn’t look like a squirrel, at least the ones I knew. We took it down the highway a couple of miles and released it near the Mimbres River. The skunk traps are full almost every day they are baited. Jamie takes them into the Black Range and releases them. He has caught nearly thirty now in the past six weeks. One website says you have to take them at least ten miles away to make sure they don’t come back. Knowing that, Jamie drives farther each day to avoid catching them twice. Charlene, the farmer across the highway, says they kill the rock squirrels. I didn’t ask by what method. Unwanted cats are drowned out here. I don’t think I could do that. But it seems that animal shelters across the country are filled with unwanted animals that people are too squeamish to dispatch on their own, so we as a society rely on a “humane” society to do the job for us. The few no-kill shelters are underfunded, overcrowded and often refuse to take more animals. Tripper in the trap. (Cheryl Howard/Borderzine.com)

Jamie has promised to loan me his skunk trap when he thinks he has caught all the skunks he is going to catch for a while. But that doesn’t seem to be happening. Recently, when I came to El Paso for Chalk the Block, I got a phone call saying that one of the cats had been caught in the skunk trap! So, instead of five cats, my burden is now down to four. Linda, who raises chickens and lives in the hills, says she will take all the cats we can catch. She has rodent and skunk infestations that could use the natural talents of a feral cat or cats.

The morning we are going to deliver the cat to her property, I lay in bed scheming of a way to trap another one. I had a vegetable crate. I could tie a rope around one of the slats and set it upright with food in it. If one of the cats went into the crate to eat the food, I could pull on the rope to bring the crate down over the cat. There were still two more problems. I would have to quickly put rocks or something heavy on top of the crate to keep the cat inside. That would require speed, but there are plenty of rocks everywhere. No problema. The second problem was transporting the crate. It would need a bottom. So, I deconstructed a cardboard box of approximately the right proportions to set the crate on. That way, I could fold up the sides, tape them and then tie the rope around the cardboard. I am happy to report that the trap worked, and that morning, we transported two feral cats to the Linda’s barn and chicken coop. Two down, two to go. One wants to be adopted. He follows me everywhere. I call him Tripper because he likes to walk between my feet or in front of them.  If he doesn’t stop doing that, he will trip me. Yesterday I saw him munching on a fat, juicy grasshopper. We have plenty of those critters around here. Maybe he is worth the food he eats. How will I know?

Free and away from our homes. (Courtesy of Jamie W. Newton)

A skunk in Jamie’s trap. (Courtesy of James W. Newton)

Tripper in the trap. (Cheryl Howard/Borderzine.com)

Marion with one of her chickens. (Cheryl Howard/Borderzine.com)

One thought on “To catch a critter”