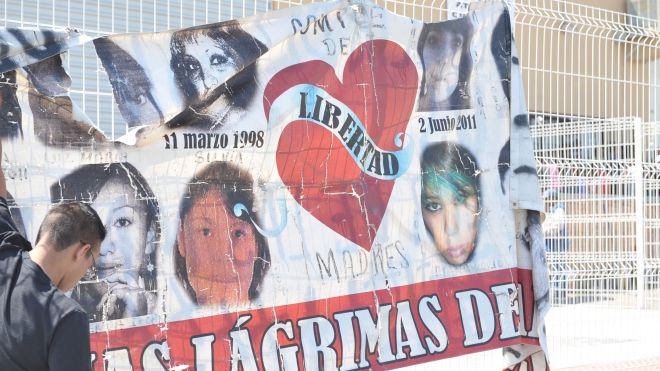 CIUDAD JUAREZ –  In a small room at the Fiscalía Especializada en Atención a Mujeres Víctimas por Razones de Género, Bernardo Manzano stood pensively with his hands cuffed behind his back, while two police officers stood on either side of him as he was photographed and questioned by more than a dozen reporters.

Not a drug dealer this time. The 43-year-old maquiladora worker was about to be charged with sexually assaulting his wife.

Parading suspects accused of committing crimes against women in front of the media have become increasingly common here, in the wake of a combined and aggressive campaign by Ciudad Juarez and Chihuahua state to curb these kind of offenses.

A 20-year legacy of crimes against women, especially the well-publicized killing of women in the late 1990s – popularly known as ‘femicides’– has given this border city international notoriety.

The new prosecutor’s office, which opened in March, deals exclusively with crimes against women but is not limited to legal matters. The modern three-story building houses a one-stop service center that includes special prosecutors and investigators, but also provides child care, medical, counseling and financial support services. In the coming months it will also provide temporary shelter for women and children facing domestic violence.

“Crimes against women are not going down, but now we have better collaboration with the municipal, state and federal police, as well as the forensic lab,” said Silvia Najera, spokeswoman for the agency.

Najera said that in its seven months of existence, the agency has received 1,040 criminal reports that include sexual assaults, murders and missing persons. Sixty percent of the reports, she said, involve domestic violence.

“Between March and June we had 170 missing women, 154 of whom were found because we were able to start the investigation faster,” Najera said. Of that group two were found dead.

“There is still a violent culture against women here and part of our work is to change that,” Najera said.

One of the most recent ‘femicides’ investigated by her office occurred in July, when a 17-year-old girl was sexually assaulted and murdered by a man her mother brought home.

“He had just gotten out of prison for murdering a woman and the mother let him in the house where he did this,” Najera said, shaking her head.

Working closely with Najera’s agency is Jesus Garcia, chief of the city’s forensic lab. The sophisticated and well-staffed facility was established by Chihuahua state, in response to the wave of murders in recent years.

According to Garcia, though, statistics show that women represent only 10 percent of the murders investigated by his office.

“The idea that every woman here is a victim is false,” Garcia said. “The media has already marked Ciudad Juarez for what happened 20 years ago, now every time there is a crime against a woman it is amplified, but it is different now.”

Still, he agrees with Najera that the crime rate against women is too high.

Some members of the press here say they have observed noticeable changes in crimes against women since January. Hector Tovar, a crime reporter for El Mexicano, said his first sense that the special prosecutor’s office was working effectively is when he noticed that victims and their families stopped asking the reporters, rather than the police, to help them resolve their case.

“I think it’s working, the women and children are finally getting the attention,” Tovar said. “They not only get their cases resolved but they get help getting out of the violent situation.”

An example of this level of confidence in the new system occurred one Saturday late July, when three young men were paraded before the media in the same small room as Manzano.

The trio was implicated in sexually assaulting a young girl at a playground in her neighborhood. When the girl told her parents, they called the police and were quickly directed to the special prosecutor. The arrests took place within one day.

“The people who work here are willing to resolve crimes against women,” Najera said. “I hope the work of this office shows results.”