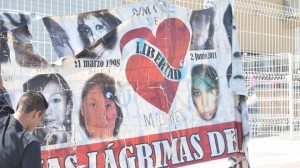 CIUDAD JUAREZ –  In a small room at the Fiscalía Especializada en Atención a Mujeres Víctimas por Razones de Género, Bernardo Manzano stood pensively with his hands cuffed behind his back, while two police officers stood on either side of him as he was photographed and questioned by more than a dozen reporters. Not a drug dealer this time. The 43-year-old maquiladora worker was about to be charged with sexually assaulting his wife. Parading suspects accused of committing crimes against women in front of the media have become increasingly common here, in the wake of a combined and aggressive campaign by Ciudad Juarez and Chihuahua state to curb these kind of offenses. A 20-year legacy of crimes against women, especially the well-publicized killing of women in the late 1990s – popularly known as ‘femicides’– has given this border city international notoriety.