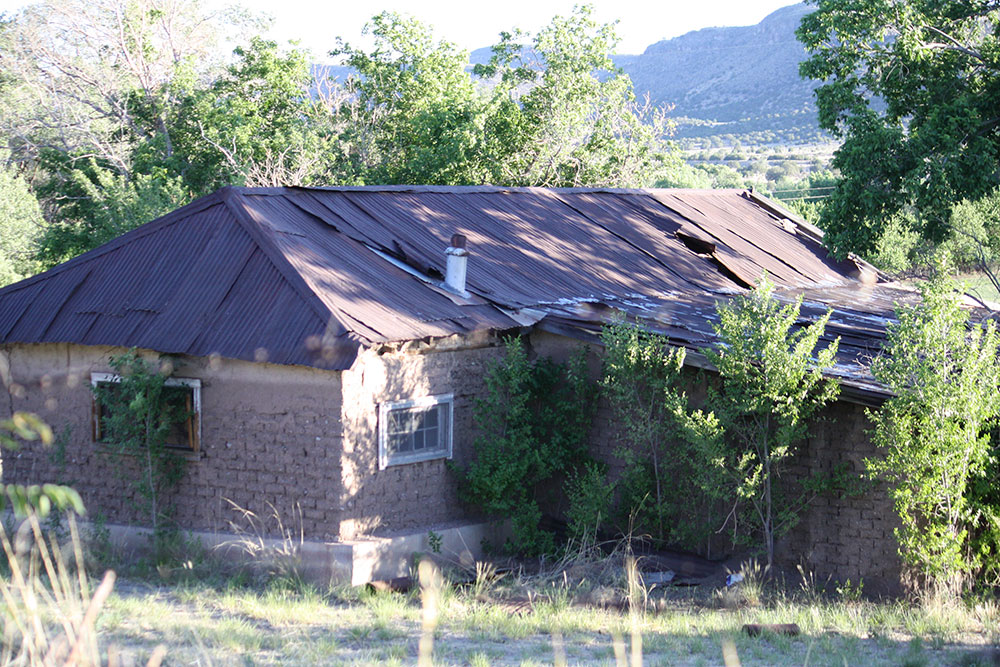 A home in San Lorenzo, New Mexico, near my new neighborhood. (Cheryl Howard/Borderzine.com)

EL PASO – Lately, I have become a peripatetic professor emerita, traveling in circles among two rural small town areas in New Mexico, and the big city of El Paso that everyone (including me) says feels like a small town. I’ve heard a lot of stories lately. My new neighbor Jamie told me one day as we were discussing wood stoves, about the woman next door to him who banged on his door at three in the morning because his swamp cooler was making too much noise. Turns out, the noisy swamp cooler was the next house over, the place where I now live part of the time. A home in San Lorenzo, New Mexico, near my new neighborhood. (Cheryl Howard/Borderzine.com)

Sam told one about walking down Market Street in San Francisco. This guy with a cloth wrapped around his fist was punching parking meters as he proceeded in the opposite direction. When he saw Sam’s reaction, he stopped and explained that Sam, himself, had nothing to worry about.  He said: “don’t mind me, I’m just crazy.”

I ask Jamie how many unstable people lived in this southwestern New Mexico rural area where I now reside?  His wife immediately interrupted and said: “a lot.” Jamie, also a retired professor, went on to explain that people in rural areas knew each other while urban people did not. There really weren’t any more odd balls in rural areas; you just knew who they were.  Obviously, in all his years of teaching at San Francisco State University, Jamie didn’t know the parking meter guy. Or, maybe he used him to bolster his argument. I remained unconvinced.

I had seen already how a small misunderstanding could become a melodrama. How a couple of innocent facts said to one family member could be a springboard for a subplot in an ongoing novel written and rewritten about another family member.

Seriously, did people in urban areas have time for such nonsense? Edd, the State Farm guy in the southeastern New Mexico community, said that small towns and rural America attract a certain kind of individual who either can’t make it in the big city or who wants to get away from the expectations of civilization. So now there were two completely different explanations for the strange behaviors I was observing. Both seemed plausible, but neither seemed convincing.

Were people behaving strangely and gossiping about their neighbors to amuse themselves, as a result of boredom?  Maybe it is just human nature to want to tell stories, to elaborate on them, to make ourselves the hero somehow, even if we have to ignore facts to be good storytellers. What are facts anyway after an initial event? Isn’t it just what we remember about it? And, we know that eye-witness accounts of events are notoriously unreliable, that even in the moment of action, we pay attention to only some things, and fill in the blanks with our expectations, prejudices, or wishes.

My roommate from college has been struggling lately with evidence that her clear memory of certain events is, in fact, false… or fuzzy. Now, she isn’t sure about what from her past is real and what is imagined. And whether she is getting Alzheimer’s or whether all of us have these experiences. But let’s go back to the question of mental health in urban and rural areas. There are lots of theories and lots of evidence. The evidence is hard to interpret because the devil is in the details (i.e. the methodology). Likewise, the theories suffer, primarily from dichotomous thinking. Cities are impersonal, temporal, and can set you adrift in a sea of anonymity and constant change (anomie). Rural areas represent an earlier (healthier?) time in America where people were more connected to each other and to the land. But, as we all know, no one can drive you crazier than members of your own family, or being stuck in a place where there are few choices and no good economic prospects. Cities have mental health services; it’s hard to find them in rural areas. So, does that mean people in rural areas don’t need them or that the population density doesn’t warrant the investment of resources? Or does it mean that because there are already resources in cities, the professionals there need to justify their comfortable urban existence by finding and diagnosing more people who need them? Collapsing corrals in Cloudcroft, New Mexico, where I used to keep my horse Cindy, more than fifty years ago. (Cheryl Howard/Borderzine.com)

My real question in this essay is why there are so many fragile folks among us, wherever they live? But I don’t have an answer. Maybe if we all think about it, really hard, we will come up with something. It is likely to take quite a bit of work to fix this problem. I hope we still have the tools.