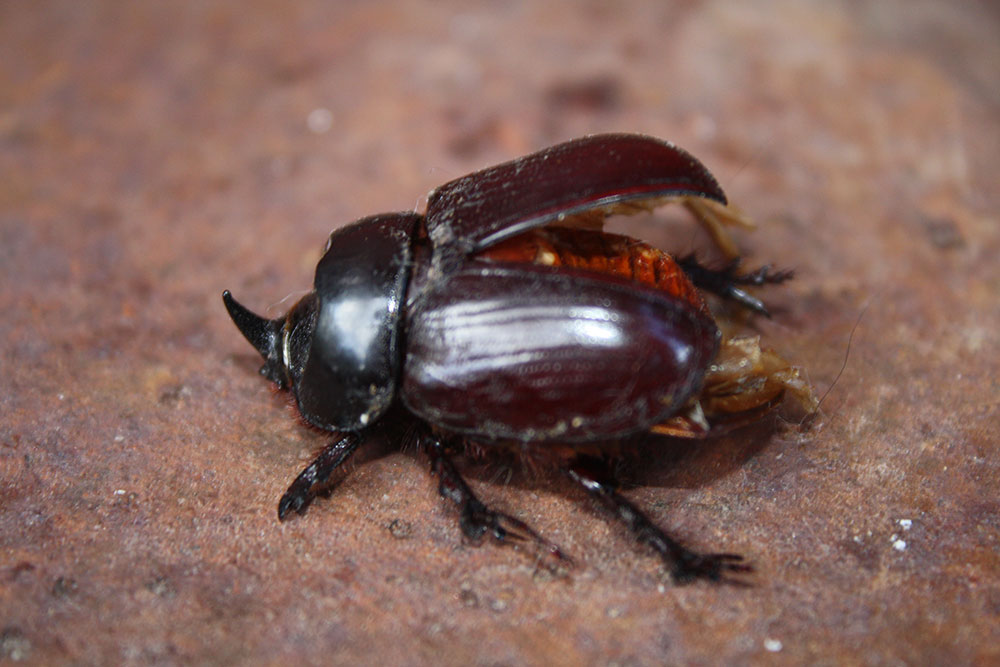 Rhinoceros beetle found dead on his back, apparently unable to right himself. See his horn? (Cheryl Howard/Borderzine.com)

SAN JUAN, NM – Clothes dancing on clotheslines, rusting tin roofs, propane tanks, trailers scattered around along with crumbling adobes, cattle guards, gates to open and close, more vehicles than people parked at the house, folks who wave (or rather put up a hand from the steering wheel) as they meet you going in the opposite direction. ¡Biénvenidos al valle bajo del Rio Mimbres! I have some lessons to learn here. I took the trash to the dump today. For a little more than five dollars a month, you can put most of your trash in your car or truck and drive about five miles, say hello to Frank, and unload you trash into container one or container two. There is a separate place for paint and chemicals, for oil, and for a few recyclables, but no plastics or glass. The snails had affixed themselves to a bag and some cardboard that had been rained on, and I had to flick them out of my car. Note to self: keep wipes and a whisk broom in the car.

There is a well and a pump house on my property. There is such a thing as shocking the well I am told. To shock a well, you wait until you are no longer going to run water for the day, then pour a bottle of Clorox in it. The next morning, you turn on the taps and wait until you can’t smell the chlorine any more. Your well has been shocked. I remember we had a well in Pueblo, Colorado. I was in third grade and not shockingly, I don’t remember shocking the well. I do remember, vividly, the “witcher” my Dad hired to locate the well. He was an old guy with a forked stick and we walked with him around the property looking for places the stick bent toward the earth. He advised us to put the well on a spot where the bending was strongest. My pre-scientific mind wanted an explanation of this phenomenon, but none that were offered seemed satisfactory. I just took down the “weather stick” in Cloudcroft this past week, to relocate to San Juan; it operates on the same principle by turning downward when the weather is stormy. I still don’t understand how it works.

After the dump, I drove into town. I realized I had forgotten my cooler, which meant no dawdling after grocery shopping because it is 27 miles back to the house and the ice cream will melt. Note to self: keep a cooler in the car and remember to freeze the blue ice before trips. I had also been told to keep more than a half a tank of gas in the car which meant I needed to buy gas. Everyone always says to keep the gas tank full, but there isn’t a place to fill up in the Mimbres for close to 20 miles, and then it is more expensive. Definitely not the big city. Even in Silver City, the gas is 20 cents more a gallon than in El Paso. The cheapest gas is at Walmart. I forgot to fill up there and had to hit a place nearly out of town. It wasn’t too costly of a mistake, only two cents a gallon more than Walmart, and I felt a small satisfaction that I had supported a local business. But out here, eschewing Walmart costs money. It’s a humbling lesson. Rhinoceros beetle found dead on his back, apparently unable to right himself. See his horn? (Cheryl Howard/Borderzine.com)

Critters. Well so far I have encountered millipedes, vinageroons, and rhinocerous beetles…in the house. Not a single cockroach. My neighbor Jamie always uses a flashlight when he is out at night as a precaution for not stepping on a rattlesnake. He has told me that the young ones are the most dangerous because they always release venom when they bite, but the older rattlers often have a “dry” (no venom) bite. Great. Nice to know. Note to self: my beloved chanclas are not the best footwear around here. Get new batteries for the flashlights. Keep them handy. I was told that praying mantisses eat young hummingbirds. I was skeptical, but I discovered one on the feeder this morning and had to flick it off, like the snails. Back gate to my neighbor's house. (Cheryl Howard/Borderzine.com)

Besides the front entry into properties from the highway, the houses have back gates connecting the neighbors. I have one to the north, but there is an arroyo to the south, and the once-existing bridge across it was wiped out in a rain storm that flooded the normally dry arroyo. A few days ago, no fewer than five people I didn’t see coming arrived at my door. They were either my neighbors or people who had stopped at their house first and come through the back gate. Two could have come through the front and I just didn’t notice. I’m glad there isn’t a sense of total isolation here. Neighbors are a good thing. People in the city might need to reassess. It’s been a long day. I think I’ll just turn in, snuggle into the smell and feel of freshly laundered, line-dried sheets and read a few pages of a good book. If I wake up in the middle of the night, I can listen to the coyote pups yipping up the hill to the west. I’m certain there will be more lessons to learn tomorrow.

One thought on “Lessons from the Mimbres”