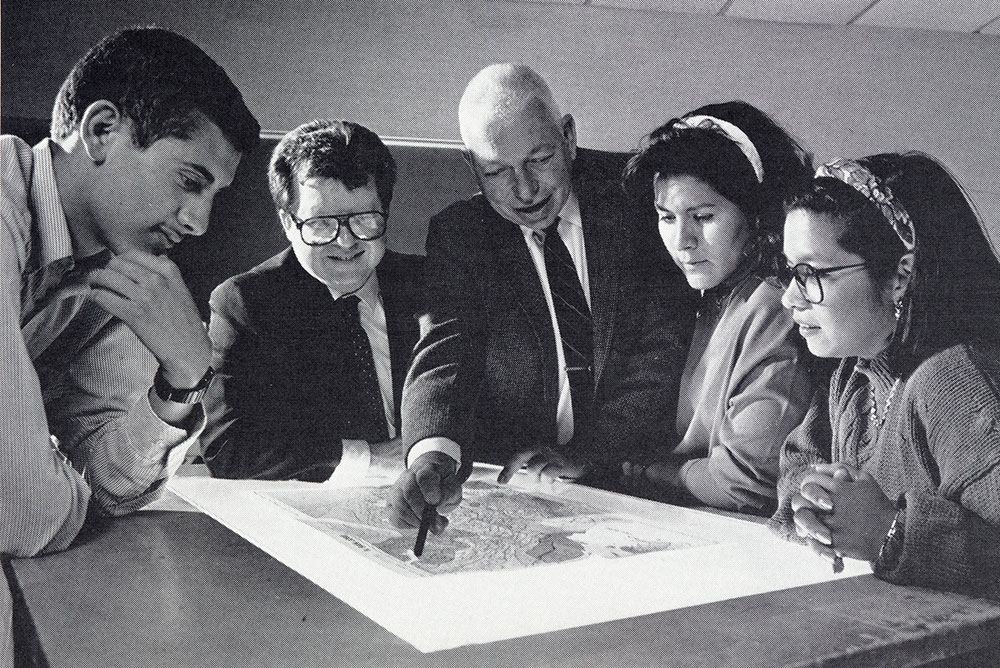 Dr. Stark and Dr. Tonn point out breeding grounds for malaria-carrying mosquitos to a group of students on the research team. (Photo courtesy of UTEP Communications Office)

EL PASO – Every year around the fourth of July, I am reminded of a trip I took many years ago to Belize with two UTEP colleagues, engineer Scott Starks and biologist Lillian Mayberry. It was for a NASA grant investigating whether remote sensing (e.g. pictures from satellites) could help predict specific areas where malaria would be most problematic. My role as a sociologist had to do with human behaviors that would be either protective or increase the risk of malaria. Dr. Stark and Dr. Tonn point out breeding grounds for malaria-carrying mosquitos to a group of students on the research team. (Photo courtesy of UTEP Communications Office)

After the most harrowing airplane ride of my life, we traveled to many parts of Belize, except the tourist cays of this small country that was originally a Mayan city state. It subsequently became British Honduras and then in 1981 an “independent” commonwealth. Until 1992, Guatemala contested this status, and there are outstanding territorial disputes that remain unresolved. The country is smaller than the state of Massachusetts and the population is also small: a little more than 300,000 mostly consisting of Mayans, Creoles, Garifunas (Carib Indians and blacks), and refugees from Central American wars. There are a smattering of Asian Indians, other Asians, the proverbial Lebanese, ex-pats from the U.S., Brits in high places, and Mennonites who seem to grow all the food. If you can believe it, the official language is English although it isn’t the most prevalent by a long shot. I don’t know what Belize is really like today. My reflections are based on memories from our short trip in the early 1990s. The country was a disaster. Everywhere we went it was some official’s first or last day on the job. The roads had potholes so deep they could take out your oil pan or something worse in a minute. The head of the malaria service was on the lam from the law and the biology teacher I spoke to at the new University did not understand the life cycle of the plasmodium that inhabits the anopheles mosquito and causes malaria.

The hotel was dank and vermin-ridden. The one Mayan ruin we visited was approachable only by a pulley mechanism across a river at certain times of the year. There was an old man in a shack as we approached. He took our coins and we saw several men with machetes beating back the jungle, but there were no interpretive signs, ni en Inglés o Español. It rained every day…several times. The housing stock was poor but it was at least on stilts.

The food was expensive and not very good, except for one place that served turtle soup, an endangered species lunch. Guilt is not good for digestion. There was militaristic evidence of British occupation in the countryside. Was it to protect the country from Guatemala? From Mexico?  Our taxi-tour guide spoke English, Spanish and Creole and still had an oil pan. The retired epidemiologist from Las Cruces we were with, Bob Tonn, knew just about everything as seasoned field epidemiologists who work in third world countries usually do, but most importantly, where to get a really cold beer. Everything we learned, my colleague Scott summed up in one statement that I can only paraphrase: “It’s a really good thing we fought and won the Revolutionary War.” I cannot think of a more profound insight that captured what I saw on that trip. Belize was a country with no infrastructure. The Capitol city had recently been moved inland to a place called Belmopan because a hurricane had pretty much destroyed the previous government enclave.  The offices had window openings but no windows. The Brits came and they took the precious hard woods, sugar, and molasses. They didn’t leave the essentials for real independence: health care, education, leadership, roads, a national culture, a useful language. They seem to be there still.  This is so often what colonialism looks like.

According to the websites I consulted about current conditions, the country has not really grown much in population, even though when we were there they were courting immigrants.  There isn’t one single daily newspaper, and the weeklies are subsidized by political parties.  That might be because no one knows what language to write or publish in. There are only two commercial TV stations, but cable is available. The median income is in the range of $3,000 dollars. The foreign debt is formidable and the country suffers from high unemployment, increasing crime and involvement with drug cartels, and a very high rate of HIV infection.

If it weren’t for the fire danger in the part of the country I inhabit, I might want to set off some fireworks, but I will be content to wave a small American flag. One thought on “Belize, still in the squalid shadow of British colonialism, reminds us of the value of independence”