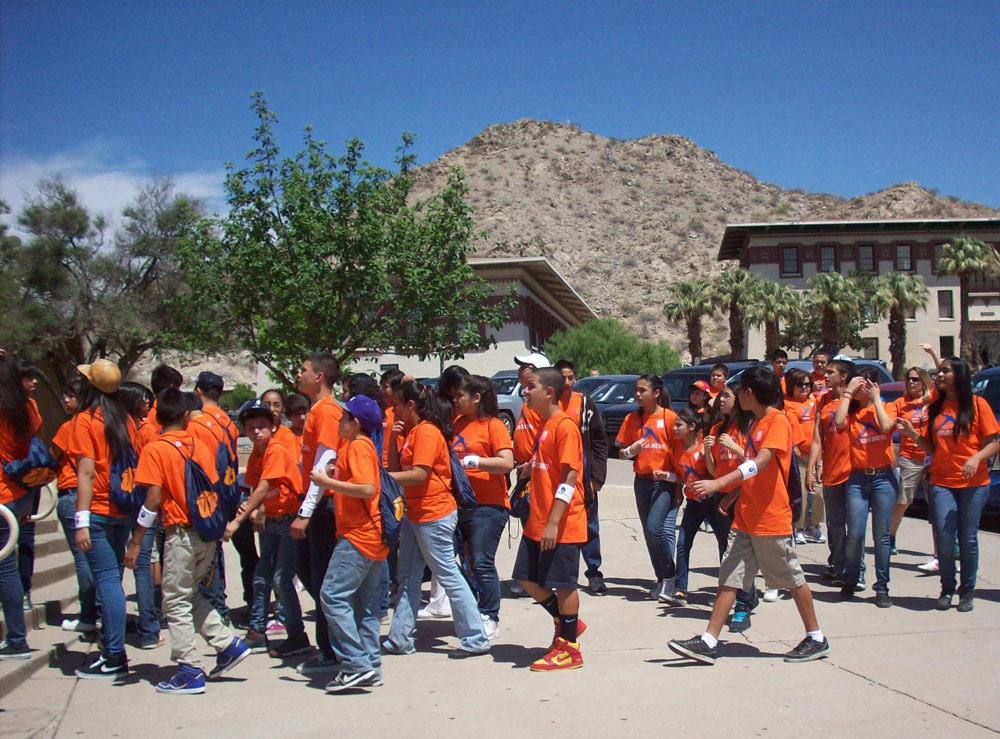 EL PASO – City and county leaders met with higher education experts at The University of Texas at El Paso recently to figure out how to stem the brain drain they say is robbing the border region of its future leaders.

“We continue to see too many UTEP graduates taking jobs in other cities,” President Diana Natalicio said. “It’s not because they want to go, but because they don’t have opportunities here. So we’re not going to postpone this conversation any longer.”

During the meeting, called The Shared Plan For Regional Opportunity, experts said that 70 percent of UTEP’s graduates leave El Paso.

The meeting was Part One of UTEP’s Opportunity Days. The next day the university hosted students from local schools. Philanthropist Woody Hunt, chairman and chief executive officer of Hunt Companies, Inc., said that El Paso needs to become more competitive in order to retain the best of the best.

“We need to trap people from outside who can command high levels of compensation because they possess highly competitive talent,” he said. “We have to trap the capital to hire those people and bring them to El Paso, and most importantly, we need to retain our graduates.”

Natalicio said that within the following three years, the team for this initiative will decide on an action plan. However, all agree on one thing so far.

“The main goal is to improve the economy, enhance prosperity, and the quality of life in El Paso,” Natalicio said. More specifically, she added, changes are to include an increase of average income and an increase in employment.

“We’re having a feeling of urgency that we’ve got to do something and we’ve got to do it now,” Natalicio said, “because as one of the commentators said, ‘it’s time that we stop letting others define who we are and set our own agenda.’”

Hunt said that the issue for the initiative involves the economic factors of supply and demand.

“The supply side is working; we’re better. UTEP’s degrees are way up both in the completion side and in their research competitiveness,” Hunt said. “So some of the pieces are in place. What’s not at the table is an effective business community working together with our political leaders, city, county, state and federal level and higher education to bring about a real change on the demand side.”

Henry Quintana, manager of public relations at El Paso Electric, said that businesses can play a pivotal role for graduates. “Businesses should get more involved with students, not just when they graduate, but while they’re still in school by offering internships,” he said. “When students already have a job here in El Paso, they’ll most likely stay in El Paso.”

Quintana said that El Paso Electric already offers internship opportunities for engineering students, and it’s looking into expanding the program for other majors.

“We want to keep our talent here,” Quintana said.

Natalicio said that there’s more to this university’s 22,640 students.

“It’s always important to remember that behind all the data and numbers are real people with profoundly important stories,” Natalicio said, “and we learn from every single one of them.” Julian Vivar is confident that getting a college degree will help him be successful. (Anoushka Valodya/Borderzine.com)

Part Two of Opportunity Days saw nearly 8,000 5th and 7th graders visiting UTEP in a field trip called Pick Your Dream. Besides listening to brief testimonials from award winning author Pat Mora and UTEP’s alum Danny Olivas, the students participated in activities that involved concepts in science and art. The objective was to inspire elementary and middle school students about college and their future career.

“I believe that once you go to college and you have a degree, you can get basically any job you want and if you do, then you’ll be successful,” said Julian Vivar, 7th grader at Socorro’s Montwood Middle School. His career goal is to work for NASA, and he plans on making a yearly salary of $70 thousand to $90 thousand.

Jonathan Perez, a 7th grader at Socorro’s SPC. Rafael Hernando III Middle School, said that he wants to help people by either becoming a doctor or a lawyer. Desiree Anderson and Jonathan Perez were part of the 8,000 5th and 7th graders that visited UTEP during the Opportunity Days events. (Anoushka Valodya/Borderzine.com)

“I need an education to succeed in life, and a high school education is not enough because there’s always more to learn,” he said. “I like UTEP and hopefully I’ll come here.”

Desiree Anderson, also a 7th grader at Hernando Middle School, said she wants to have her own social worker business.

“I need an education to go on in life, and I want to make a good living,” she said. Anderson talked about the reasons why some students choose not to go to college.

“They probably think that it’s too hard or they don’t feel like learning anymore,” she said. “I know that going to college is a lot of pressure, but I’m going to push myself until I graduate.”