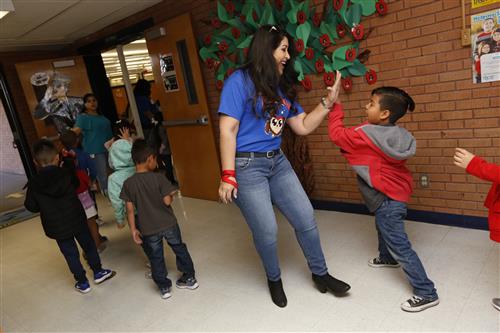 El Paso County schools – including both traditional school districts and charter schools – had 34,603 students enrolled in kindergarten, first grade and second grade this year, according to data released in March by the Texas Education Agency. That’s down more than 5,000 from the 2011-12 enrollment in those grades, according to TEA records, a decline of 13%.

Only one traditional school district in El Paso County – Canutillo Independent School District in the western part of the county – has seen an increase in K-2 population in the past seven years. Canutillo’s K-2 population grew by 88 students to 1,345 this year, or 7%.

Even Socorro ISD, long described as a growing district on the eastern edge of El Paso’s city limits, is experiencing a population decline among its youngest students, according to TEA data. Socorro enrolled 8,758 students in K-2 this year, down 317 from 2011-12, a 3.5% drop.

El Paso’s population slowdown appears to be driven largely by people moving from the county to other communities in the United States. The Census Bureau reports that El Paso had a huge loss of people between 2010 and 2018 in what is called domestic migration, movement from one U.S. community to another. The census estimated that El Paso had a net loss of more than 50,000 people in domestic migration in those years.

What little population growth El Paso is seeing is being driven by births and immigration from other countries, according to the Census Bureau. School enrollment figures suggest that some of those children are moving from El Paso before enrolling in school. The Census Bureau estimates that El Paso County had about 14,000 births in 2012. This school year, when those children turned 6, first-grade enrollment in the county was less than 12,000.

The new Texas Education Agency student enrollment data suggests that much of the domestic migration loss in El Paso may be among young adults and their families. Slowing enrollment growth – or worse, declining enrollment – creates numerous risks.

Socorro ISD has passed Ysleta ISD as the county’s second-largest school district, growing more than 7% in the last seven years to reach 46,814 students. But almost all that growth is in middle school and high school grades. Socorro’s elementary school population has grown only 1% in eight years and kindergarten and first-grade enrollment is down in that period. Socorro’s growth will slow or stop in the next decade if those trends continue.

El Paso County charter schools enrolled 5,810 students this year, up 57% over the 2011-12 school year. Charter schools are adding to the enrollment struggles of traditional public schools, but are not the primary cause.

Enrollment in El Paso County’s nine traditional public school districts dropped by almost 8,400 students between 2011-12 and 2018-19. Growth in charter schools accounted for 2,100 of those students. The bulk of the decline — 6,300 students – is due to fewer school-age children living in El Paso County, according to TEA data.

Robert Moore is founder/CEO of ElPasoMatters.org. He is a veteran El Paso journalist who has covered population trends for more than 30 years.