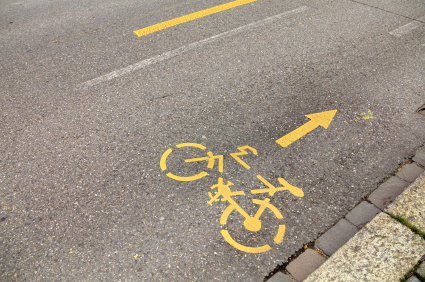 There are not enough bicycle lanes throughout the city. (©iStockphoto/imagedepotpro)

EL PASO – The winds whistled by swiftly as I held a tight grip on the handlebars on bumpy pavement pocked with potholes and loose gravel. Suddenly, I was startled by a truck passing me too closely and lost my balance, falling off the bicycle. The truck didn’t bother to stop. There are not enough bicycle lanes throughout the city. (©iStockphoto/imagedepotpro)

I was fortunate enough to not get seriously injured, but other cyclists have not been as lucky. Just a few days ago, a 54-year-old man riding his bicycle east on Pebble Hills Blvd. was hit by a Texas state trooper who ran a red light. The cyclist suffered head and arm injuries as well as a fractured hip.

Bicycle accidents are on the rise here in the border city. More cyclists are on the road these days and the people behind the wheel have more distractions resulting in the increase in accidents. Many times this type of accident is not revealed to the public by the media. In this case it was most likely because it involved an authority figure.

The bicycle is my form of transportation. I ride it daily from the Lower Valley of El Paso to the steep hills of the Westside. Riding my bicycle allows me to feel a freedom that cannot be achieved any other way. There is a gratifying feeling behind being able to move with the power of your legs. The wind that is cut as I ride lifts my spirit and blows me calmly into a trance of thought.

In the bicycle I have experienced the streets along with the traffic that flows through them and I believe the issues are that the people behind the wheel are not aware of the cyclists who share the road with them and most of the streets in our city do not dedicate a space for the cyclist.

I ride my bicycle down Alameda, the busiest street in the Lower Valley. I have witnessed accidents and have been a victim of one. A few months ago Alameda had rough pavement rutted with potholes and loose gravel, now it is as smooth as a track. The Texas Department of Transportation re-paved Alameda and made the lanes wider.

It was done with the state’s $48 million dollar contribution for El Paso road projects. These projects are under way all over town – the Border Highway, Oregon Street, 1-10/Joe Battle and many more. Although improvements in these streets are necessary, so are bicycle lanes but city officials and planners have left them out the plans.

I was shocked to realize that Alameda was completed without bicycle lanes. The whole time during its construction I would pedal through the street and I was sure they were going to implement bike lanes. It seemed like the logical thing to do — bicycle traffic on that street is heavy.

In a usual ride through Alameda in the morning, I would come across an average of about eight cyclists, sometimes even more. The riders ranged in age but they were mostly older Mexican-American men. This street does penetrate a low-income community, which is why many people depend on a bicycle for transportation.

After the street was completed I realized that the lanes were a bit wider, especially the far right one. A bicycle lane could have easily been added while allowing enough space for two car lanes. There are not enough bicycle lanes throughout the city. The few we have are a joke. Some lanes end after short distances not covering the whole street. Delta Avenue is a prime example — the street is about a mile and a half long but the bicycle lane covers only a distance of about an eighth of a mile.

While the city is consuming all this money on road projects, is it too much trouble to ask for a four-foot lane at the end of the street and curve? As cyclists all we really want is a line to separate us from the vehicle traffic. We want a space that can be respected by drivers and that can bring us a sense of safety.

As cyclists we also want to bring awareness to the drivers in the streets. Many El Pasoans are not used to sharing the street with cyclists and others simply just do not respect us. To achieve this I believe it is as simple as to place a street sign that informs the drivers to be aware and to yield for bicycles.

In my latest trip to Austin and San Antonio I rode my bicycle with pride. The streets in those cities were overwhelmed with cyclist and vehicular traffic, but the drivers acknowledged the cyclists. In many streets they did not have bicycles lanes but there was a street sign that read—Bicycles may take up the right lane. A sign as simple as that can communicate the message to the driver that bicycles are out there.

After reading a few articles on the city’s newspapers I was under the impression that El Paso was going to become a cyclist friendly city. In my opinion we are far away from that. It appears the city does not want to evolve.

In a study conducted by Men’s Health Magazine in September of last year, El Paso was the third fattest city in the nation. Implementing street signs and bicycle lanes all over the city would motivate El Pasoans to ride their bicycle more often, helping reduce obesity. Cycling is one of the best ways for people to achieve good health, fitness and an increase in longevity.

Also with more people pedaling safely in the streets the amount of vehicle traffic would reduce. Early in the morning and in the afternoon during rush hours the streets are jammed with cars, making travel times lengthier, creating more pollution and more consumption of gasoline.

With gas prices fluctuating and increasing, it is becoming expensive to get around. More people riding their bicycles can serve as a protest against gasoline prices. This also means less contamination of emissions in our atmosphere. When driving into the city the fog of pollution is noticeable, it is not as bad as other large cities, but it has already caused a change in weather patterns.

People need to stop relying on the automobile to transport them. We are mobile creatures and we need to learn to depend on our feet. Bicycle lanes will promote an alternative lifestyle and help keep people on their bicycles safe. The city needs to focus on what is best for society and evolve. Albert Einstein couldn’t have said it better, “Life is like riding a bicycle. To keep balance one must keep moving forward.”

4 thoughts on “Bicycling is good for El Pasoans, but El Paso ignores bicycles”