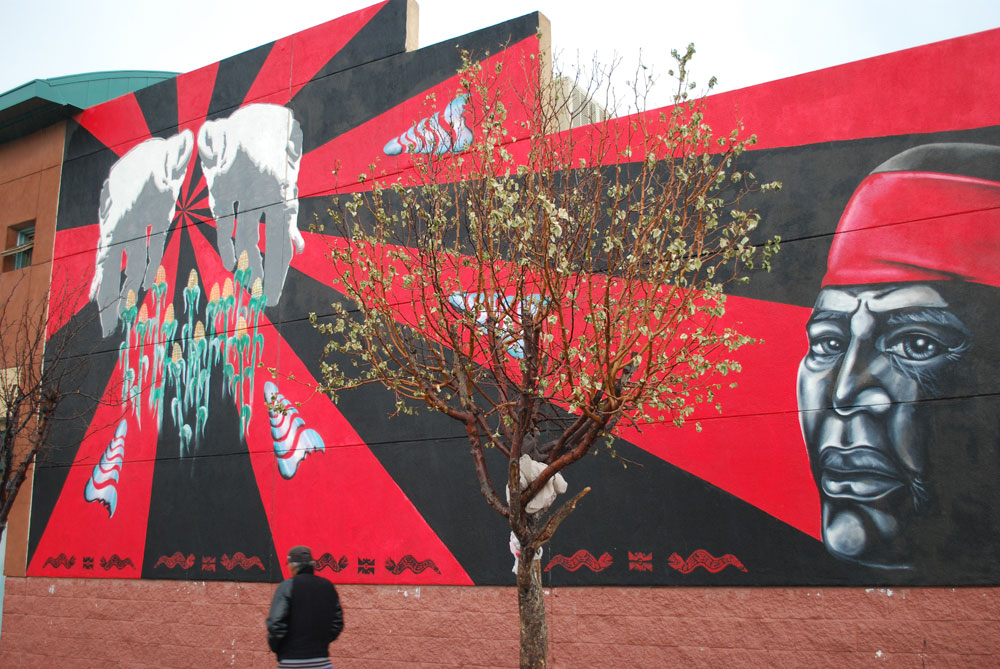 EL PASO – Local artists from El Paso and Ciudad Juarez have joined together in a network that spans the border, dedicated to painting the streets of both cities with hopeful art to refocus the minds of many who see this area as a war zone.

The network known as Puro Borde, consists of more than two dozen artists from the El Paso-Juarez area who help each other exhibit their murals, turning their cities into more colorful communities. They also place their work in local galleries.

Self-described “border artist” Arón Venegas, is a member of Puro Borde in El Paso who believes that art communicates with power. Venegas, a graduate of the University of Texas at El Paso, has worked on a variety of murals with Puro Borde and has exhibited his work in both Mexico and the U.S. As for creating a sense of pride in a community through public art, Venegas suggests that a single mural cannot have the power that many with the same objective can. “Art that is not public is not worth doing,” Venegas said. In his opinion, art should serve the community. He explains that a mural is an interactive and collective process from beginning to end.

Apparently there is not much sense of a divide between the artists from Juarez and those from El Paso.

“The idea is to stop dividing the border with our actions, the government has already done that with all their policies,” Venegas said. “We want to see the sister cities as one region when it comes to interacting among artists.”

Coral Simón, Puro Borde member who resides in Cd. Juarez, said the two groups interact well with each other. She said that what joins the two groups is the border identity they share, their mutual love of art and a vision to bring art to the streets.

The group hopes to communicate a more accurate image of the borderland and the identity of their community through art and murals. “I am a strong believer in the power of the visual arts,” Anne Perry UTEP art lecturer, said. In her opinion a mural whether in a Juarez colonia or in downtown El Paso can uplift spirits, encourage community activism, promote understanding and inspire pride in a community.

“Public murals and artists who seek to enrich our border community by creating them, are needed more than ever,” said Perry, adding that the rise in cuts to ethnic studies make artists even more necessary today.

Simón said that at some point the group was seen restricted by the violence in Juarez. However, she said that people have retaken the streets. In a turbulent time when drug wars and financial recession is affecting the lives of many in the border community, art can be a way to relieve tension and encourage positivity, she said.

Simón explained that Puro Borde promotes art by disseminating different expressions from border artists while joining them together. “It can transmit sensations, messages, register what is lived, make the impossible possible. It can inspire and can be the origin of new creations to materialize our deepest thoughts,” Simón said.

With the threat of budget cuts affecting art, music and theater programs in schools across the country, projects like Puro Borde can bring color to neighborhoods and expose the community to art they may otherwise not see.

Unique border art created by the artists from PuroBorde can be viewed at puroborde.org.