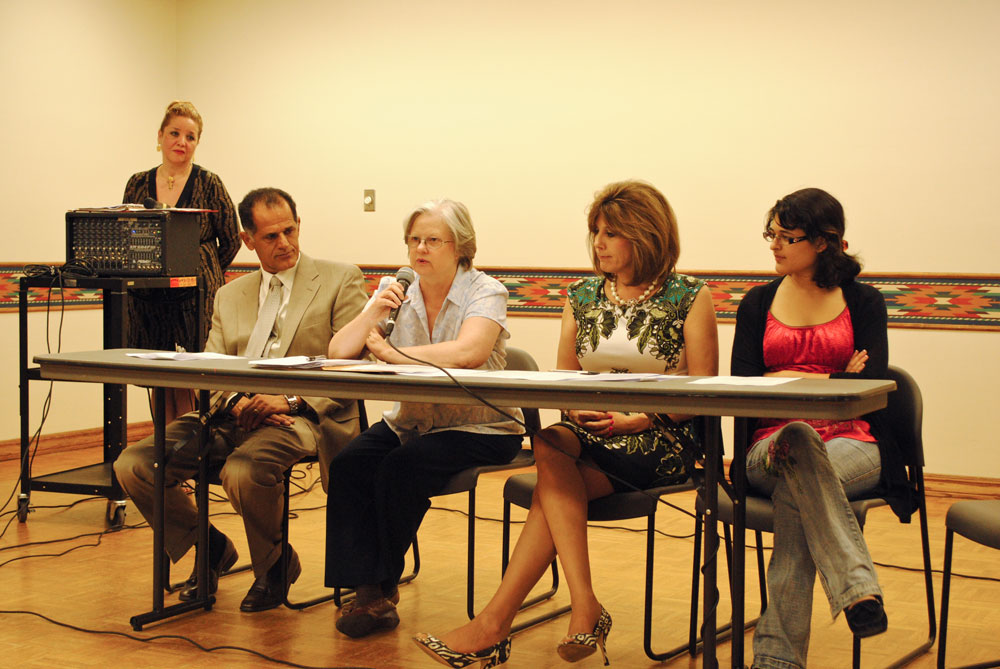 EL PASO ­– Many of us take for granted the opportunity to receive an education, while the Baha’is – Iran’s largest non-Muslim religious minority of some 300,000 persons – have to learn in secret and in fear of imprisonment.

The El Paso campaign to publicize the plight of the Iranian Baha’i held an event entitled  “Education Under Fire” at the University of Texas at El Paso April 11simultaneously with two other events in New York city and Canada. Project Manager Gia Heidarian said that as more individuals learn about the Baha’i hundreds of events have been organized in cities around the world.

“’Education Under Fire’ has been addressing this issue to the Iranian government to give them freedom of education,” said Estella Valles. a member of the Baha’i association.

“For the past 30 years, the Iranian government has made it a state policy to block the progress of its largest non-Muslim religious minority of 300,000 Iranian Baha’is, who have faced every kind of abuse including arrest, imprisonment, torture and even execution,” she said.

Since 1979, young Baha’is have not been allowed to attend any of Iran’s universities, according to information released by the association. In order to learn and become educated many Baha’is would arrange and meet in people’s homes and learn in secret. According to a video presentation at the event, professors would  risk punishment if they teach or grade a student’s work. In order not to get caught they would have to find someone local to drive across the country with the package of paperwork, get it to an instructor who would be willing to grade it, which would take up to two months for just one assignment. These groups of individuals became known as the Baha’i Institution of Higher Education (BIHE).

The BIHE started in 1987 with 100 students, which developed into 3000 students who graduated over the years from these unoficial classes. It became a marathon of classes that ran from 8 a.m. to 7 p.m.. Math and Science were the two majors in the beginning and then music came along.

“In May 2011, the government launched a coordinated attack against the BIHE, raiding dozens of homes, confiscating computers and materials, and detaining 18 professors and administrators,” Valles said.

The Univeristy of Texas at El Paso will be offering the course, “Introduction to the Baha’i Faith” and “Islam and Gender” in the fall taught by Dr. Susan Cangurel.

“I’m very excited to be teaching the course, it will help familiarize people with different faiths,” Cangurel said.

This human rights crisis is sending Middle Eastern students to the U.S. in the hope of  graduating from college asfter their credits from BIHE are accepted by U.S. universities.

“Baha’i faith doesn’t get much attention in religious studies, so it is exciting to have a class just dedicated to the Baha’i religion. This event is an international issue and it is exciting to be apart of it,” said Nazani Heydarian, president of the UTEP Baha’i student association.