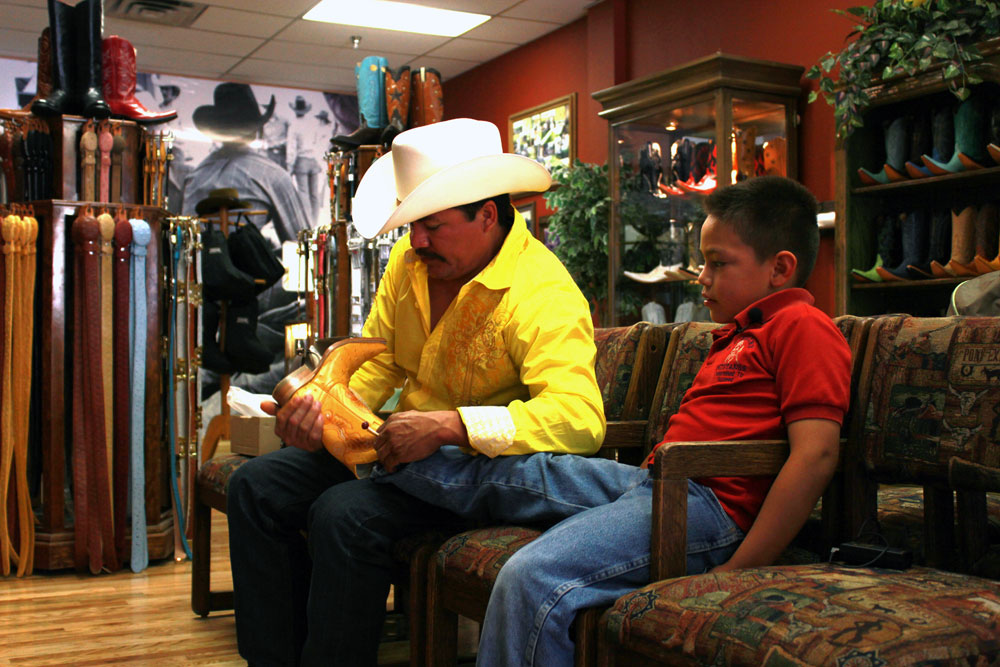 EL PASO – “One moment,” Juan Guzman Villalobos said as he grabbed more cowboy boots from his RV parked outside the Border Farmworker Center in El Paso, Texas. Juan’s excitement in displaying a mixture of exotic and working boots made him forget about his ride to work.

After a few minutes he comes out holding on to a pair of well-worn boots. “I prefer the ones made with ostrich skin because they are the most comfortable to use,” Juan explained while lining his eight pairs of boots in the RV steps. He then points to a pair of boots crafted with alligator skin, then picks up another made out of cow hide embellished with tiger prints.  Villalobos, as many others in the El Paso and the surrounding communities, share a devotion towards boots.

The El Paso Convention and Visitor’s Bureau markets its bordertown as the boot capital of the world. Despite the large number of boot production, El Pasoans purchase only a fraction of their locally produced boots. Still, boots, a tradition kept through generations, remains a clear sign of identity for them. Rafael Guzmán, 26, wears boots every day. He customized each of his six boots: “I choose the point, the heal, the design, the skin. I do everything according to my taste.”

“I use boots most of the time with my cowboy clothing,” Juan Manuel Rodriguez said as he wanders around the STARR cowboy store. A 58-years-old, he said boots feel comfortable and essential to his everyday attire.

Guzmán shared the same sentiment. “It’s like a shoe to you for daily use,” he said as he sits getting his boots shined just outside Juarez Boots. But boots can be expensive, especially for the working class.

“If I could, I would buy in Juarez because of the price and variety,” Jose Aguilar explained.  He shopped in Juarez Boots with his family, including his eight-year-old son who was trying on a pair of bright yellow boots. For Aguilar cost matters.

Cristian Lange, the second-generation owner of Alex Boots, recognizes that when boots are made in El Paso, they are pricier because of the cost of the materials and the labor.

But it is the experienced labor that draws many boot manufacturers to Juarez, such as Bob McClean owner of Legendary Boot Camp. McClean chose El Paso for the availability of skill labor, second and third generation boot makers, and the availability of material. According to Redco (El Paso Regional Economic Develop Corporation) there are 49 boot manufacturers in El Paso, and a majority make boots by hand, following the traditions of previous generations.  As a result, El Paso has won a reputation for high-end boots with price ranges from hundreds to thousands of dollars. This recognition helps justify having boots business in town. McClean remarked that a key selling point in Europe is “to have the El Paso label on the box and on the boot.” His company exports one third of his production overseas.

McClean, like many of the custom boot makers in the area, admit that his company only sells a “blip” in El Paso.  Meanwhile, J.B. Hill Company, said they only sold 2 or 3 pairs of its 2000 pairs a year locally; and even Alex Boots, the store that attracts working class customers said it sells only 30% of its boots to El Pasoans. Meanwhile, these businesses have also noticed a changing trend in popular boots styles. The younger generations are turning away from their parents’ style.

“My mother dressed me, and I had to wear them,” said Leslie Aguilera. Now she only wears boots with square tips or “rodeo-style” and made with simple leather or “pura vaqueta”. It is a departure from her father’s taste: pointy tips or “picuditas”, and exotic skins.

With stores in Las Vegas, Louisiana, Alabama, North Carolina, and Chicago, Cristian Lange of Alex Boots can account for this change. He said they sold 60% of rodeo boots and 40% of pointy tips or “picada” boots. Only five years ago, picada boots ruled, reaching 80% of the demand.

Still, despite all this changes, Lange’s business does not plan to be going anywhere: “We live here, we have always lived here, and here is where we are going to be!”

I was raised in the small multi-cultured community of Brawley, California, 30 minutes outside Mexico. As the only daughter and the youngest of three, I was always encouraged to express myself. At a young age I discovered the power one’s voice could have on individuals, however it wasn’t until I entered Ms. Gina Germani’s Journalism101 course, at the Imperial Valley College, did I come to appreciate this idea. During the course of the semester I awoke to a world beyond Brawley, to a place where millions of individuals all across the world shared their own voice, their own opinion, their own story. The idea of helping those individuals share their stories with the world immediately appealed to me. I had fallen in love with journalism. Since my self-discovery I have interned at my local region’s newspaper, The Imperial Valley Press and have had the honor of having a class article published by Borderzine.com, Imperial Valley supports soldiers in annual “Treats for the Troops.” During my internship I have had the opportunity to take on nationwide issues affecting the local community, localize state issues, and announce community advancement efforts. On May 4th, I was recognized for my work in both the Journalism department and the Work Experience, internship department of IVC and was awarded two certificates for outstanding scholastic accomplishment. I hope to attend the University of Southern California of Annenberg Schools for Communication & Journalism in the fall of 2013 and continue pursuing my goal of becoming a foreign correspondent.

One thought on “El Paso the Boot Capital of the World, but not for El Pasoans”