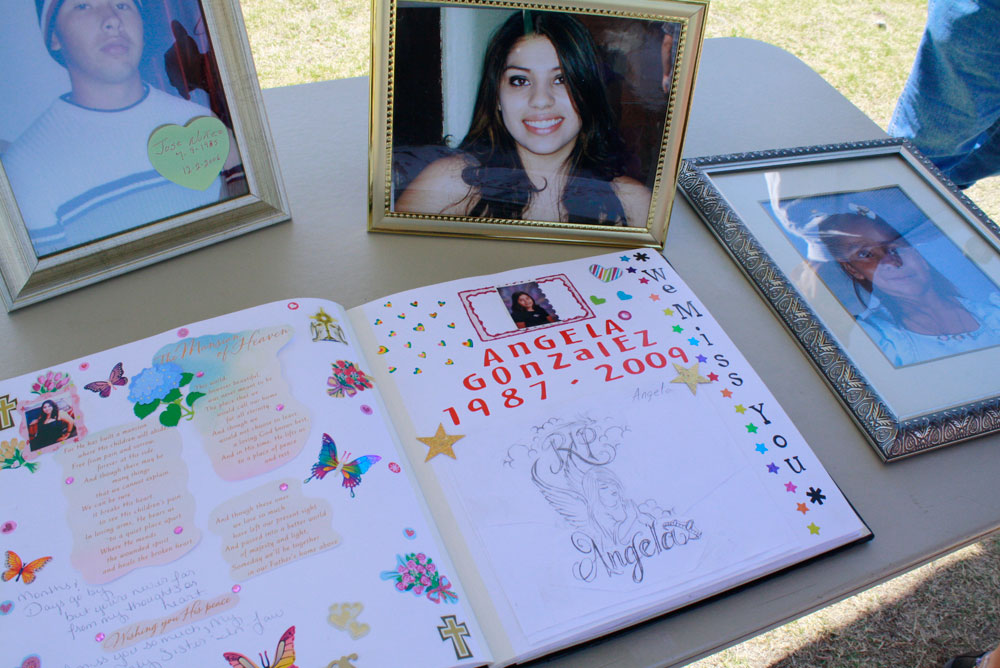 "Our family will never be the same," said Gonzalez, mother of Angela Gonzalez. (Danya Hernandez/Borderzine.com)

EL PASO — With a knot in her throat, the mother of a daughter killed in a Driving-While-Intoxicated incident tells the story of how the tragic event changed her family’s life forever. Unfortunately, like in many of these cases, the victim stays dead while the drunk driver remains alive and free.

“Our family has forever been tarnished. Our family will never be the same,” Connie Gonzalez said.

She is the mother of Angela Gonzalez, who along with her friend Orlando Figueroa, were run over by a drunk driver while crossing Lee Trevino in 2009 killing them on impact. Angela was 22 at the time and left a three year-old son behind. "Our family will never be the same," said Connie Gonzalez, mother of Angela Gonzalez who was run over by a drunk driver. (Danya Hernandez/Borderzine.com)

In a car commuter city such as El Paso, the chance of being hit by a drunk driver is higher than in cities with prominent public transportation. In El Paso 92 percent of workers commute via car, truck or van according to a 2009 study by the Center for Neighborhood Technology, higher than the Census reported national average of 86 percent.

In 2011, offenders had a better chance of crashing than getting stopped by a police officer. The El Paso Police Department arrested 2,719 people charged with DWI and reported 3,009 alcohol-related traffic accidents. Mothers Against Drunk Driving (MADD) statistics indicate that an average drunk driver has driven drunk 80 times before his first arrest.

Gonzalez’ frustration has been increased by the fact that the driver, Eric Barajas, is still free awaiting a trial that has been reset for almost three years. Not only did he plead not guilty to two counts of intoxicated manslaughter, Gonzalez explained, but on the one-year anniversary of Gonzalez’ and Figueroa’s deaths Barajas was arrested again, charged with burglary of vehicle. Barajas pleaded not guilty again and was granted freedom once more.

“While he is with his family enjoying all of the holidays, there is always an empty chair in our family,” Gonzales said. “I visit her grave every day. That’s now where I get to spend time with my daughter.”

Virginia Gonzalez, executive director of MADD, explained that the “uphill battle” has become the norm for the city of El Paso. “A drunk driving crash is as violent as a homicide,” Gonzalez said, adding that crimes caused by a drunk driver are not considered violent crimes here.

El Paso Mayor John Cook said more should be done against drunk drivers and is advocating for stricter punishments. “One thing I would like to see is for the courts to have less tolerance for drunk driving. I personally think it should be a mandatory jail sentence for a first offence,” Cook said.

There are several measures such as sobriety checkpoints and ignition interlock programs that have been proven useful in preventing some fatalities due to DWI. According to the Center for Disease Control and Prevention approximately 1,500 to 3,000 lives can be saved per year with the use of sobriety checkpoints. The CDC also estimates that for every dollar spent in the implementation of preventive methods, there is revenue of about $6.80, considering the reductions in medical costs, work loss, and lost quality of life.

Unfortunately Texas is one of the 12 states that do not use sobriety checkpoints. According to the Governors Highway Safety Association, Texas considers such measures as “Illegal under Texas’ interpretation of the federal constitution.”

Connie Gonzalez said that in 2010 she joined a group of Mothers Against Drunk Driving to visit government officials in Austin, Texas, to demand the implementation of the checkpoints. But they could not get legislators to enact these laws.

“This is a problem that is 100 percent preventable,” Virginia Gonzalez added.

Like Connie Gonzalez, there are many family members of victims who are still awaiting justice. They believe that making the decision to drink and drive is reason enough for incarceration, let alone killing someone in the process.

“It’s really very frustrating when you hear about people who are arrested for the third, fourth and fifth DWI. You wonder how did we get to that point where this person is still allowed to drive?” Cook said.