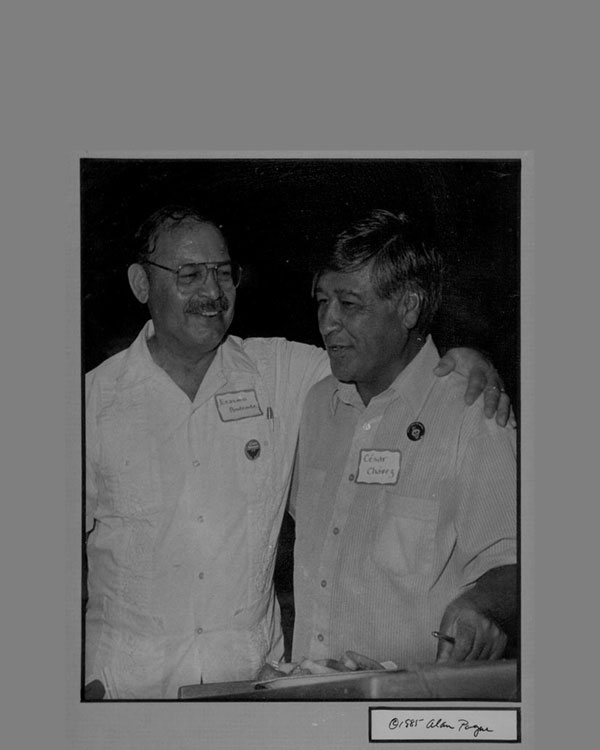 EL PASO – No, not the New York/New Jersey football team, the 1982 alternative rock band, or the 1971 George C. Scott movie. Even better, they are civil rights heroes among us, standing up and moving for what they believe in. March 31 was César Chavez day. A year ago on this day, I marched in honor of César with Erasmo and Sally Andrade, both long-time advocates of social justice. Erasmo died March 30, 2012. On March 1, I traveled to NMSU to hear Dennis Banks, co-founder of the American Indian Movement in 1968. Some years ago, a student in my class said he could ask his grandfather to come speak to the class. I asked who his grandfather was, and he was the renowned Albert Armendariz, Sr., a civil rights champion from here in El Paso. The accomplishments and dedication of each of these gentle giant lives deserve recognition; we owe them our gratitude for their lives’ work. I won’t focus on César Chavez; almost everyone knows about him now that there is a holiday in his name. Few people know about Dolores Huerta though, co-founder of United Farmworkers Union, who was just as active as he was, raised eleven children and was jailed for non-violent protests 22 times. I heard her speak at UTEP not too many years ago. Often times, women in social movements do not get the credit they deserve. But that will be a matter for another blog.

Albert Armendariz, Sr. was born in 1919. He served in WWII, and graduated from El Paso High and UTEP.  After the war, he went to law school at the University of Southern California. In his long career, he was active in the leadership of LULAC (League of United Latin American Citizens) since its inception in 1951, one of the founders of MALDEF (Mexican American Legal Defense and Education Fund). Armendariz was an Immigration Judge for the Department of Justice for many years.  He argued before the Supreme Court and was a Justice in the 8th District Court of Appeals here in El Paso. He brought a discrimination case against EPISD and won (Alvarado v. EPISD, 1971). He also advocated for hiring justice for Mexican Americans in the police and fire departments and other areas of city government. Armendariz credited his activism to the time he spent in the military during the war. “Before the war, we were inconsequential,” Mr. Armendariz told the El Paso Times in 2005. “When we came back, we rose. We found out in the war that we had value, and we instilled that value in our people.”

Dennis Banks was born on the Leech Lake Indian Reservation in Minnesota in 1932, part of the Ojibwa nation. Along with Russell Means, Banks co-founded the American Indian Movement in 1968 which tried to address the concerns of urban Indians and the federal government’s responsibilities for respecting the treaties they made with various tribes. They were responsible for several “occupy” protests, including an occupation of Mt. Rushmore in 1971 and another in 1972 of the BIA (Bureau of Indian Affairs) building in Washington, DC, called the Trail of Broken Treaties.   The most serious (and deadly) protest took place over a period of 71 days in 1973 at Wounded Knee, South Dakota.  Wounded Knee was symbolic, the site of a December massacre of between 100 and 300 men, women and children in 1890 by the U.S. 7th Cavalry. There were two other important marches, one in 1978 called the Longest Walk, echoing the roundup of Navajos in 1864 and relocating them hundreds of miles away to the Bosque Redondo. This march ended in an occupation of the Washington Monument, protesting 11 pieces of legislation and other currently relevant issues. The second Longest Walk took place in 2008, highlighting sovereignty issues as well as environmental concerns.  Curiously, Dennis Banks credits some of his activism to time spent in the military.  While in Japan, he saw how organized peaceful protest could result in changes in governmental policies, but he and other AIM activists also learned armed military tactics.

Erasmo Andrade was born in 1931 near Bruni, Texas, and grew up in San Antonio. He served in the Navy during the Korean War, and afterward graduated from St. Mary’s, began teaching public school and later went to Thurgood Marshall Law School. He spent three years in Turkey and Iran teaching ESL for the Department of Defense, and it was upon his return that he renewed his interest in social justice advocacy. Erasmo started as a union organizer for migrants, garbage collectors, and other marginalized groups.  He also worked on behalf of farmworker conditions and voter rights in San Antonio and south Texas.  Other causes he and Sally championed were mental health and prison reform. Erasmo and Sally at 2011 Cesar Chavez March, El Paso. Erasmo is behind the U.S. flag and Sally is just to the right. (Raymundo Aguirre/Borderzine.com)

After moving to Austin in 1973, Erasmo continued both farmworker and mental health involvement, while teaching government, history and economics at Austin high schools.  In 1993 the family moved to El Paso, where Erasmo continued teaching and dedicating his life to the well-being of his community, especially in the arenas of social justice, health, and education. Last year Erasmo returned to Turkey where he and Sally were able to share the present country as well as his memories of it.  His death is a loss to this community, and will be sorely felt, as was the loss of Judge Armendariz.

How would a young person get to meet a gentle giant such as these. Put your heart in the right place, choose the cause of justice and act. As Emerson once said: “Hitch your wagon to a star.” These giants are closer to the stars than we are, but we grow in their presence. And who knows, you may become one of them.

Erasmo died only a few days ago. Judge Armendariz died in 2007 at the age of 88. MALDEF President at the time, John Trasviña stated: “The best way to honor Judge Armendariz’s life is to carry on his work for justice and equality. Today’s generation of Latino leaders will make Judge Armendariz’s vision a reality.” Since Erasmo and I both share the same profession of teaching, I know we share this vision with both Armendariz and Banks.

The giants who made such a difference beginning in the sixties are getting old or have already passed.  It is now up to a younger generation to take up the cause, because, as we see, without diligence, injustice can remain, can even worsen. Dennis Banks said at the end of his talk: “I don’t want to come back here, show another movie…in ten years and face the same issues. Young people need to step up and receive the staff.” Stand up for what you believe in.  March for it.

That was the beginning and end of this March. There need to be more marches for justice.  Like the March reenactment of the Selma to Montgomery march that first occurred 47 years ago and included a bridge crossing that then resulted in an event known as Bloody Sunday.   This year, marchers were protesting voter suppression and Alabama’s immigration law. Like an annual march on César Chavez Day. Like a march for women’s rights, which seem to be increasingly threatened these days. Don’t wait for another March to roll around.

Erasmo and Sally at 2011 Cesar Chavez March, El Paso. Erasmo is behind the U.S. flag and Sally is just to the right. (Raymundo Aguirre/Borderzine.com)

Erasmo back in Turkey in 2011, (Courtesy of the Andrade family.)

Banks and Josie Jimaréz-Howard deep in a discussion of history. (Cheryl Howard/Borderzine.com)