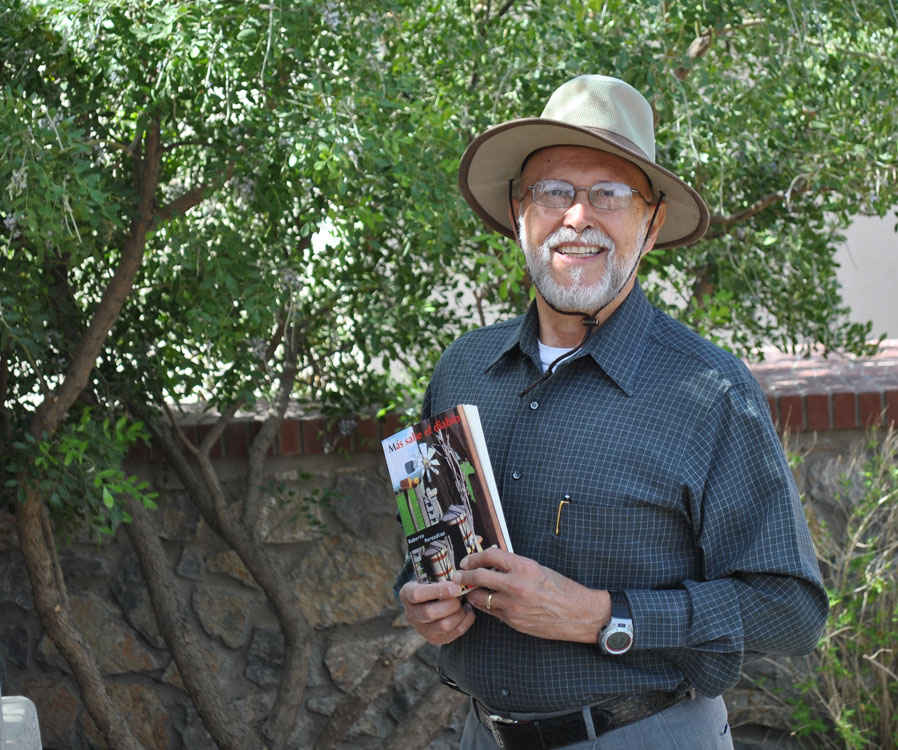 Roberto Perezdíaz is an aspiring author inspired by the desert and the border region of El Paso and Juarez. After 26 years working in a federal court as an interpreter he retired in 2010 and in March of 2012 published his first book Más sabe el diablo published by Editorial Eón in Mexico City. (Oscar Garza/Borderzine.com)

EL PASO – The old man is color blind, but as he converses with the younger man he brings to life the contrasts and dilemmas they must go through in order to understand la vida.

A person’s rite of passage from childhood to adulthood is a powerful theme in Roberto Perezdíaz’ writing.  He describes how maturity makes people more adept at walking the paths to life and he places them in the desert of the borderland.

With the release of his new book Más sabe el diablo, Perezdíaz has assembled a collection of short stories that explore themes of innocence and maturity through a collection of funny, insightful stories.

“Every story with the exception of El papalote and Tomasito are independent ideas. But I noticed that one of the themes bubbling through the surface of the stories is that of oneself and the more you mature, the more knowledgeable you become,” Perezdíaz said. Más sabe el diablo by Roberto Perezdíaz is a book in Spanish composed of 11 short stories based in the El Paso - Juarez border region. (Courtesy of Roberto Perezdiaz)

Perezdíaz, uses the border region of El Paso and Juarez as a conceit that explores the duality of man. His writing, bristling with vivid and authentic detail, makes the reader feel that they are embarking on the journey with the characters. In one story, La manda, the drug smuggler crosses the border and slowly loses his mind as he drives deeper into the U.S.

“You’ve lived; you’ve encountered rough spots in your life. So everyone has those elements to them.”

Perezdíaz enjoys building characters that spring from this border region, who speak in a very distinct way, true to how they actually would talk. His 26 years of experience working as an interpreter in Federal Court here nourished him with themes to write about and gave him plenty of experience as a bilingual writer.

“I prefer to write a lot. It’s easier for me to write a lot and then take away in contrast to add later on,” he said. “I like to write about that type of game; auto reflection, introspection, psychological motives that make characters perform the actions they do.”

When it comes to his writing about locations and how he approaches that, he explained that he likes to reveal the hidden beauty of the desert. “I try to find natural beauty wherever I live. And at first glance if you look at those mountains (referring to the Franklins in El Paso) they’re kind of rough with not a lot of vegetation,” he said.

“But you start to get closer and closer and suddenly you notice flowers and cactus springing with tiny flowers, so there is a beauty that comes with that dryness that inspires survival or adapting. Because human beings, in order to survive here we have to adapt and see what this environment has in order for us to enrich our lives,” he said.

Perezdíaz finds inspiration from a number of different sources but one that he uses to write about here, he said, was certainly the desert.

“If there is life, there is opportunity, hope and it lends itself in the extreme heat to dream. For me, to see a vast landscape clears the mind. I like to see the open, vast landscapes from here to a beach on California,” Perezdíaz said.

“One of my strongest aspects and for Chicano writers in general is dialogue. And I’ve had other writers comment on that,” he said. According to Perezdíaz, Chicano writers don’t really relate to the stereotypical elegant writing. To him, writing honest and realistic dialogue gives his characters a more vivid impression.

Perezdíaz hopes that readers will experience a sense of fun while reading this collection of short stories and maybe later, they can criticize what they didn’t like. He hopes that people connect with these stories and relate to the characters.

“Primarily I just want them to have that feeling of ‘I liked the story – I was enthralled by it’. You know, I want to read more; that’s what I want,” he said.

After spending all his years as a professional interpreter, Perezdíaz actually uses what he learned to help him when he is writing. “When you are an interpreter, you have to constantly listen and mentally think about what you are going to say. Because what you say there has to be coherent and so that helps a lot,” he said.

But he never imagined that El Paso would not only become a major part of his life, but end up as a setting for his stories.

“Well, first we came here because you had to cross the border to get to Mexico and so various times I came here with my parents to either pick up an aunt or a grandparent and go back to California, which is where I grew up, “ he said.

“But at first I just came here to El Paso for the job and that’s about it. Later on, after being here, I found out that I like being with my people, being surrounded by my people. I love that wherever I go, I can hear Spanish in this town,“ he said.

Más sabe el diablo published in Spanish by Ediciones Eón of Mexico City is available directly from the author at rpdcs@sbcglobal.net.