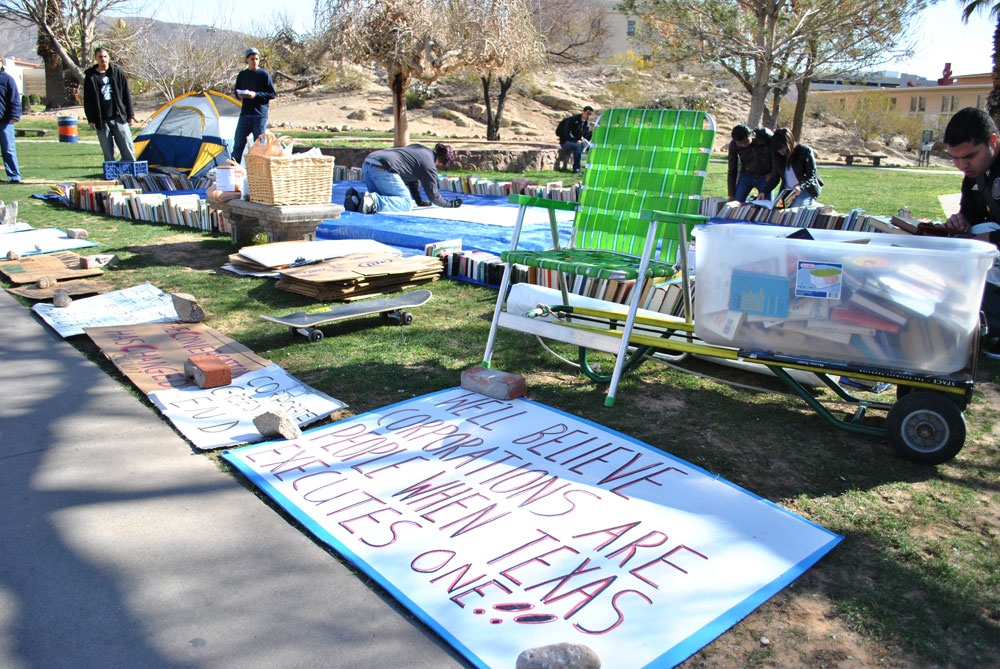 Members of Occupy El Paso help by making poster signs and setting up a tent that has become the symbol of the Occupy movement. (Lourdes Marie Ortiz/Borderzine.com) Members of Occupy El Paso help by making poster signs and setting up a tent that has become the symbol of the Occupy movement. (Lourdes Marie Ortiz/Borderzine.com)

EL PASO – In an effort to voice concerns about student loan debt and unemployment, dozens of students set up camp during Occupy College Month in February at the University of Texas at El Paso

“We are here to raise awareness, promote reform, and motivate action,” Orlando V. Cordova, member of Occupy El Paso, said. He added this is also an effort to promote change away from social, political and economic injustices.

In support of the National Day of Action for Education, members of the Occupy movement organized the event and sold donated books to raise funds.

“I am here because I am one of the 99 percent,” said David McKenny, president of Miners Without Borders. “Students need to become the educated population in order to compete in the market.” According to its website, Miners Without Borders was organized “to look beyond borders, especially the current situation in Cd. Juarez, and serve as a support group for Juarenses.”

McKenney donated the books for the event and said it was important for him to contribute because it was the first time there had been an event like this at UTEP. The books served as an attention grabber for different types of students even those who are not familiar with the movement or don’t care about it.

“This is an idealist movement. I have nothing against policy,” Albert Rodriguez, a double major in History and Science, said. “There is nothing wrong with the status quo.”

Rodriguez, who described himself as a conservative, did not let his view stop him from taking a look at the books. He said there is nothing wrong with voicing your concerns, but this was not the time or place to protest.

Andrea Caraveo, a freshman in forensic science, and Neyma Gonzales, a freshman in engineering, said they were attracted by the books. But they did express their concern for the financial issues that students are facing.

“We are in school and it is hard to find a normal job and it makes me nervous,” Caraveo said.

Gonzalez said that she does agree with the purpose of the Occupy movement, “We are the people, if we don’t speak, who’s going to do it?”

After graduation, students are slammed with debt and few employment opportunities. Student debt of $870 billion has surpassed the nation’s $693 billion credit card debt, according to the Federal Reserve Bank of New York. Cordova said he hopes that students and the community look past the portrayal of protestors as hippies. He said this generation needs to focus its attention on the issues that will affect them in the near future.

“Today’s youth are caught up watching Jersey Shore instead of really taking into account issues that are and will affect them,” Cordova said.

He said the movement is open to anyone who wants to join. He described it as a decentralized, leaderless movement that allows everyone’s voice to be heard.

Occupy El Paso meets three times a week, Tuesday and Thursday at 6 p.m. and Sunday at 1 p.m. with location announcements available on their Facebook page.

“The best thing to do before you join any movement is to educate yourself in politics and use your own reasoning,” said Rodriguez.