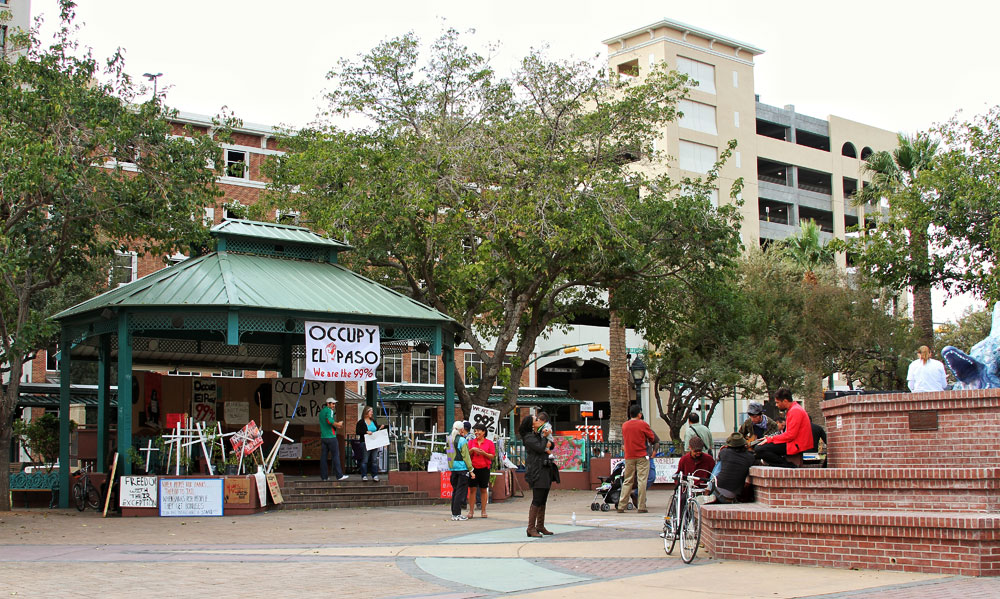 EL PASO – There are small herds of them scattered between the trees, some shirtless and tanned from the sun, sitting around in cozily crammed circles that are set-up between their tents along with various handwritten signs they have made and carried for weeks.

I went into the San Jacinto Park completely convinced that I would be called to join their ranks of Occupy El Paso and come out smelling like the downtown streets of El Paso. I thought that they would try to convert me and convince me to go pro-hippy, sleeping in the grass with them, and laughing over text messages out loud to each other while a siren goes streaking by, but that’s before I stumbled into the red and white-striped food tent and got a taste of humility.

In the food tent, I timidly approached a man in a tan sun hat, with clear blue eyes that wrinkled when he proudly told me he had been Occupying El Paso for 10 days. When he started talking about his story, I nearly joined the Occupy movement on the spot – but didn’t. There was a lot of passion that was caught up in his words, spilling from his mouth and carrying the desire for change he wanted to see in a nation that he felt had created a “great disparity” between people.

The Occupy Movements are pushing to rid the nation and world of a system that has, in their eyes, catered to the big corporations and literally purchased politicians to the point where 1% of the population of U.S. controls 42% of the wealth. Many of these peaceful protestors are also fed up with failed health-care and education systems, says my resident hippy Mark Benson under his tan sunhat.

Benson is an ex-military, ex-small business owner, ex-corporate worker who now Occupies San Jacinto Park in downtown El Paso. In the middle of a group of empty tents, we both stand out with me in a salmon colored jacket and camera dangling off my side, and him with his dirty button up, dingy cap, and worn-out denim jeans. It’s quiet and most of the young Occupiers are napping or reading. He tells me that the reason these El Paso Occupiers are taking measures such as camping out in a park through the fall when they have homes and cars and jobs, is that “People are finally waking up everywhere to injustices, the greed, and the corporations that are financing greed.”

I try hard to keep the corner of my mouth from twitching, from opening and possibly telling him he’s both right and wrong, but I don’t because I soon realize this man is actually one of the few really out here with a mission in mind while the others snoozed to Modest Mouse before their march that afternoon.

Benson, who also has a background in medical treatment, mans the medical tent that often has “workshops” on teaching the campers how to maintain their health through the upcoming winter months and avoiding cold weather injuries. It is clear that his compassion is genuine for the people he cares for, as a provider of information he was happy to say that they had good turnouts for these workshops and that they haven’t had any problems so far. “As this thing grows, I’m here as a medical representative, because I have some training, but I can’t handle a thousand people, so I have to train others,” says Benson.

Glancing around the park, campers are planted to their spots, some shooting the breeze with their friends. The protest signs are gathered on each other, ready to be waved to the public in about 15 minutes.

A motley bunch of races and religions, or lack thereof. Benson mentions that there haven’t been any issues with these colliding backgrounds, although “there are some discussions over this, but we’re learning how to set those things aside and focus on what’s important.”

Benson goes on to tell me that some of the contributors to the movement have a lot of money, and some are homeless. Some chose to come out here and camp instead of doing something else. Some are sacrificing a lot of what they usually do, such as school or work, to be camping in downtown El Paso. I wonder exactly what people think they’re going to school and work for, since their investment in these things goes to the big corporations they are protesting against.

Another aspect of this Occupy movement that is happening nationwide, is that the presence of violence in place of the original Occupy attitude of “civil disobedience” has vanished in some cities. In states such as Oregon, Texas, and California, protestors have become destructive, some even setting buildings on fire. “My personal concern is definitely for those people, number one, I don’t have a personal agenda, but a personal concern for their safety,” says Benson.

When I ask him about having a possible concern for the groups he’s with, he tells me that they might be receiving some information soon, on where those violent groups made mistakes, so that the Occupy El Paso protestors can educate themselves on how not to make the same ones. “We’re trying to learn as we grow, and as a fledgling organization there’s always going to be problems. I don’t speak that in a prophetic way I hope,” says Benson as he laughs. The El Paso Occupiers look as peaceful as can be. (Luis Hernandez/Borderzine.com)

The El Paso Occupiers look as peaceful as can be, with two police officers directly across the street, keeping an ever-watchful eye on the young hippies.

“We anticipate some legal wranglings – (the city could) fail to provide us with another permit from San Jacinto to the next place we occupy,” Benson admits.

“It may be a lack of willingness on their part to grant us another permit, not because we’ve caused problems, but because people don’t want us to be doing what we’re doing.” Stunted with this thought, I realize that these hippies are only here because the city allows them to be, and wonder where the cool factor in asking The Man permission to protest against The Man is…

A few people I recognized sat around on benches but refused to speak to me about why they were there; a bit confounding to me since I thought they were there to educate the public and stand up for something they believe in. I often found myself walking away from them thinking “chicken shits.”

Personally, I cannot say that I think is it wrong for there to be a certain number of people to have “wealth,” because my thought is that everyone can make their own wealth with hard work and dedication. And yet I also agree with my new buddy Benson that the education system is a bit wonky and there could be some improvements in the healthcare system, but I say our country needs to look around and realize that we have a lot to be thankful for, because other countries do not have what we have, and a lot of people do not have the opportunities we have.

As cliché as it might be, my father’s own rags-to-riches story affected me greatly growing up. He had a poor education growing up and now makes more money than most college graduates. America especially, is big on opportunities for people, but they don’t pursue them fully. I think the Occupiers need to go at their movement from a different angle, and with people that won’t contradict what they are “protesting.”

I appreciated Benson’s prowess, the way he speaks about what he believed was right, but I could not find myself convinced to join the half-naked park hippies with their flaky motives and Mustangs parked in the lot across the street.

Before parting I looked at the tired but impassioned features of Benson, with an appreciation for such dedication for a cause, although I think slightly misplaced, and wondered what change, if any, these people would bring about in the world. It’s apparent that people all over are not satisfied with the state of things, most often nobody ever really is, but a change is in motion, and things can always get better.

The hope I have with the Occupy movement is that more people will stand up for things they believe in, but that they will dedicate themselves to it fully, not wag a sign around telling the world to wake up to an issue of misplaced wealth, when your new car is waiting to take you back to your desk job or next class, and you plan to grab a Starbucks on the way home.

I am very proud of the success my father has created for himself, starting out poor but achieving success. He has given me great opportunities in his wake, providing me with funds for my education. But since corporate greed is very much a problem; and human struggling, inequality and poverty are issues, a movement IS needed, but I don’t believe Occupy is the right one.

Everybody should have an equal shot to make good money, all 100 percent. Like my buddy Benson said, in spite of our differences, it’s “not a religious thing, not a political thing, it’s a human thing.”