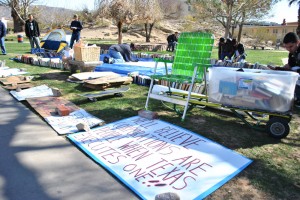 EL PASO – In an effort to voice concerns about student loan debt and unemployment, dozens of students set up camp during Occupy College Month in February at the University of Texas at El Paso

“We are here to raise awareness, promote reform, and motivate action,” Orlando V. Cordova, member of Occupy El Paso, said. He added this is also an effort to promote change away from social, political and economic injustices. In support of the National Day of Action for Education, members of the Occupy movement organized the event and sold donated books to raise funds. “I am here because I am one of the 99 percent,” said David McKenny, president of Miners Without Borders. “Students need to become the educated population in order to compete in the market.” According to its website, Miners Without Borders was organized “to look beyond borders, especially the current situation in Cd.