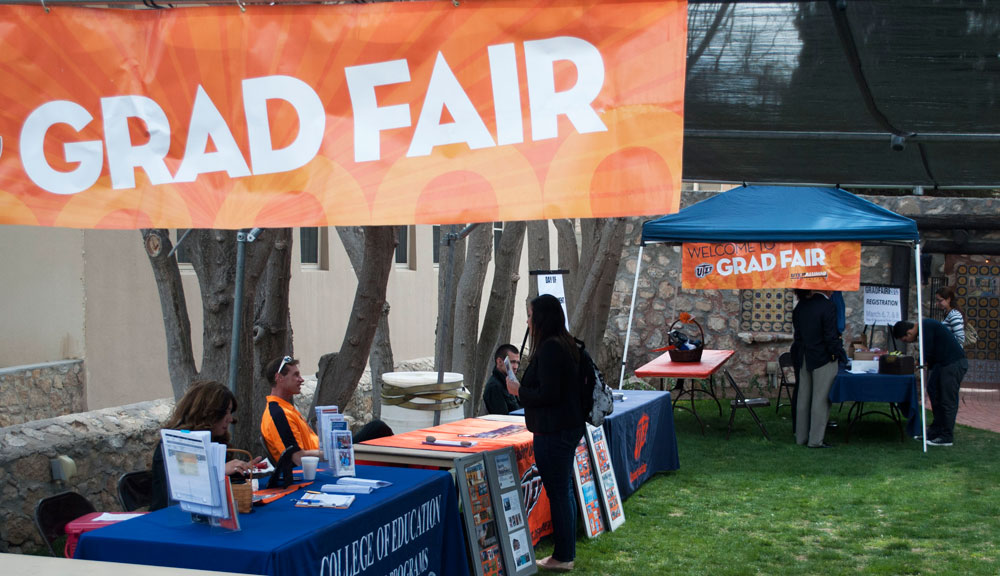 Students look at graduate school as a way to get a full-time job. (Erika Lopez/Borderzine.com) Students look at graduate school as a way to get a full-time job. (Erika Lopez/Borderzine.com)

EL PASO – Josie Jimarez Howard imagined herself surrounded by artifacts from fascinating distant epochs as she pursued her passion for history tending to treasures in a museum after earning a degree in history from Reed College. But instead, she found herself selling modern cosmetics at Macy’s.

She soon realized that the only way to get the job she wanted related to her studies was to go back to school for a graduate degree. “I think a lot of jobs teaching in the museum require a higher degree than a B.A. I looked for jobs at museums but during the Bush administration there weren’t as many.”

Howard, who had graduated in 2007, enrolled in graduate school at the University of Texas at El Paso in 2011 and is currently a teaching assistant for a freshman history class. “Honestly, it’s been hard. I hope that a museum would hire me,” she said.

As the U.S. economy drags along trying to improve, careers for college graduates do not seem good and plenty. Most college graduates have found themselves left in debt after attending a four-year college with a degree that doesn’t attract jobs.

College graduates soon end up working in part time jobs, doing tasks completely unrelated to what they studied, probably depending on their parents for support until they can be financially independent.

According to a survey of 571 recent college graduates by the Heldrich Center at Rutgers published by the New York Times, about 14 percent of those who graduated from college between 2006 and 2010 are looking for full-time jobs. They are either unemployed or only have part-time jobs.

“I think it’s a huge problem,” said Dr. Josiah McC. Heyman, a professor of anthropology at the University of Texas at El Paso. “When you ask young people to excel in their education, we enable them to go to school… I think it’s a problem.”

Not everyone is going to find a job in the field they studied, he said. “Often, this is frustrating at first but can lead to a fulfilling career.” Student loan debt is a bigger issue, he said, because of increasing costs of higher education and reduced financial aid. “Then, the initial struggle to find a job and a career can be much more of a cause of personal suffering and practical problems, like bankruptcy,” said Heyman.

Judith Zubia, a UTEP college graduate, is struggling to find a full time job. “I graduated December ’09 with a minor in Secondary Education and a major in Spanish. I have found a couple of jobs since I graduated, but neither of them has been full time,” said Zubia. “I think it’s really hard to find a job as a teacher here in El Paso because of all the budget cuts,” she said. “Get a higher education, go to a public college, borrow money, not too much money, don’t be extravagant.” was Dr. Heyman's advice for college students. (Erika Lopez/Borderzine.com)

Gabriel Espinoza, a cook at Pot Au Feu International Restaurant here, has been working for two years without a college degree. “I have the same amount of training as someone who went to culinary school, but I earned money instead of going into debt. I earn a livable wage,” said Espinoza. “Not everyone should be going to college anyway. So many kids are there because they feel obligated to,” said Espinoza.

After being left out of their field of choice, some college graduates wonder if college was worth it. Heyman has some advice: “Get a higher education, go to a public college, borrow money, not too much money, don’t be extravagant.”

Howard also agreed with Heyman. “I was pretty upset. I went to college for personal gain rather than getting a job. I wanted to go to an institution to learn something. I learned how to think and react. I would do college all over again.”