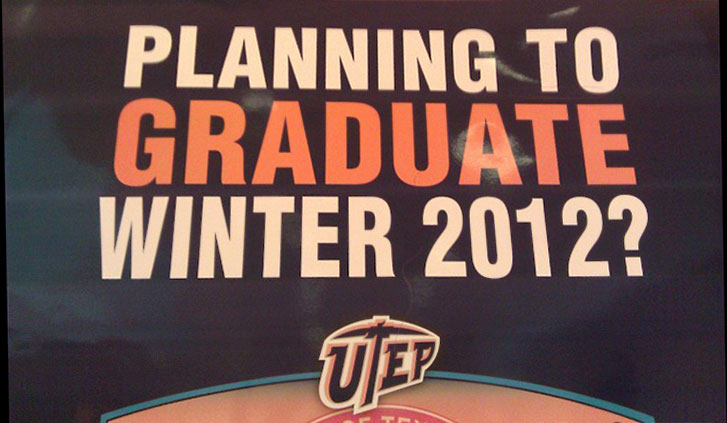 The ease with which students can get loans can cause them to graduate with more debt than they should. (Elliot Torres/Borderzine.com)

EL PASO – Graduation is an accomplishment every college student looks forward to, a reward for years of hard work, but for some students what should be the beginning of a successful life can be the start of a nightmare – paying back thousands of dollars in student loans.

“I would use half of my student loan to help me survive the next six months of school, until I got the next loan,” said Salvador Jauregui, a 2010 graduate from the University of Texas at El Paso. The ease with which students can get loans can cause them to graduate with more debt than they should. (Elliot Torres/Borderzine.com)

He, like many others across the nation, worked while attending school and relied on student loans to help cover expenses. After gradation Jauregui had difficulty finding a good paying job, and eventually defaulted on his loans.

The main reason for students having trouble repaying their loans is the economy, according to Lerma. With a shaky economic recovery, some graduates have had trouble finding jobs that require their degree.

“There’s always a job out there. I’m not worried about some menial job, but a meaningful job? That’s what worries me,” said Roger Estrada, a senior at UTEP.

Even if students are able to find work after graduation, just repaying the loans themselves can be a headache. Many companies buy and sell private student loan debt from other financial institutions, so by the time a student graduates they may have trouble keeping track of whom they owe money to.

“It’s almost a real endeavor for students to make sure they are on top of [their debt],” said Lerma.

The penalties for students who default on their loans can be severe and lasting. They range from garnishing wages, to withholding income tax returns, and damaging their credit. According to Lerma the main reason why mortgage loans are typically denied is because of defaulted student loans. UTEP officers were unable to provide information about the average amount of student debt among UTEP students. (Elliot Torres/Borderzine.com)

Requests for comments on these issues such as what is the average amount of student debt among UTEP students were directed to UTEP Associate Vice Provost for Enrollment Management Craig Westman. He transferred them to UTEP public information officer Veronique Masterson. She said she was waiting for information from the Texas Higher Education Coordinating Board and was unable to respond for this article.

The ease with which students can get loans can cause them to graduate with more debt than they should. “It’s up to the individual to either say, ‘no, I don’t need that extra money,’ but honestly most people don’t say no to a couple extra thousand dollars,” Estrada said.

There are ways to help prevent students from getting into too much trouble from loans.  According to Lerma counseling students about loans and repaying them, can help to educate students about the risks.

The following recent changes in student debt managed policies by the federal government provide for various was to delay, or help ease the repayment process.  They apply only to federal loans.

The student may qualify for deferment if re-enrolled at least half-time in college, is unemployed or unable to find full-time employment, or in a period of active-duty military service during a war. Deferments don’t happen automatically and students need to contact loan servicers.

There are two types of forbearance, discretionary and mandatory.  With discretionary, your lender makes the decision whether or not to grant you forbearance based on financial hardship or illness. If you meet certain criteria your lender is required to grant the forbearance. Like a deferment, forbearance does not happen automatically, the loan servicer must be contacted.

Aside from deferment and forbearance there is the loan debt could be forgiven, canceled, or discharged. The qualifications for these options include the borrower dying, being totally disabled, being employed in certain public service jobs, or some teaching positions.

The federal government lists complete information about repaying loans and options like forbearance and deferment can be found at http://studentaid.ed.gov/repay-loans.

“They [students] need to realize that people aren’t going to give them thousands of dollars and it’ll just dissolve. You gotta know what you’re getting into,” Jauregui said.

Even when faced with the prospect of graduating owing thousands of dollars in debt, some still say that the benefits of student loans outweigh the costs. According to Lerma, college graduates will end up making more money in the long run. And for many students loans represent the only way to get a college degree.

“I still think for the majority of America it serves to get a paper that says, ‘Hey I did my time, give me a good job,’” Estrada said.