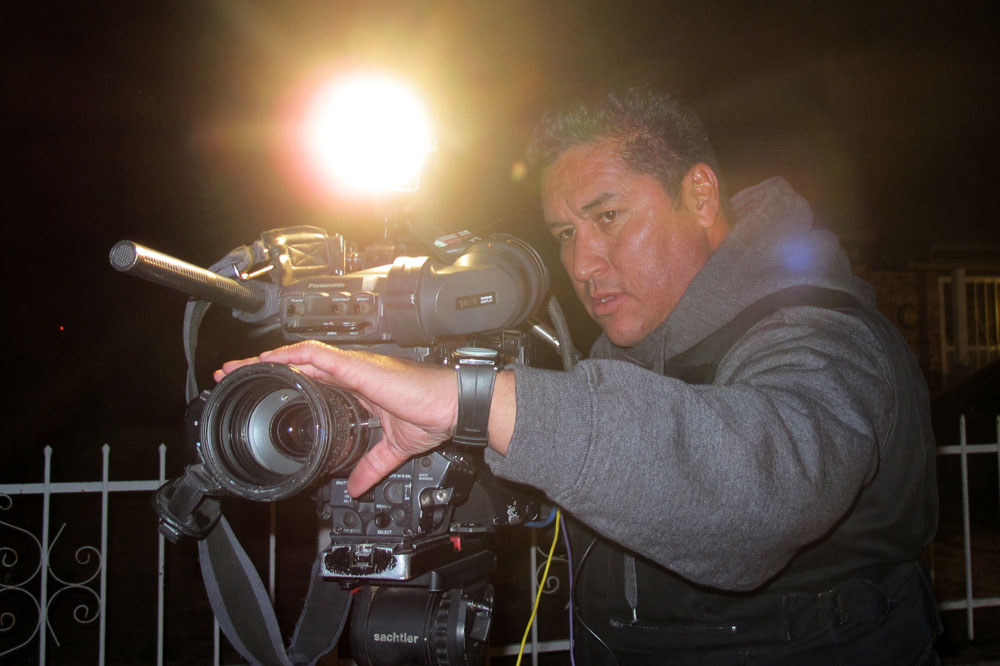 EL PASO – Sitting on the cold hard cement the man was able to remove part of his blindfold and focusing his sight, the dim light revealed a small dirty room covered in blood.

Alejandro Hernandez Pacheco, 42, had been kidnapped in Torreon, Mexico, and one of the few who survived to tell the story.

He worked as a cameraman for the television station, Televisa, in Torreon. On July 26, 2010 during a regular day of work, Pacheco was sent to cover a news story about killings connected to a prison in his city.

Hernandez and two fellow reporters were sent to the prison in Gomez Palacio, Durango, were several murders of guards had taken place that same month.

“As we were going out of the prison, after getting interviews and video we were aggressively dragged by a group of five people in to a car, they had guns,” Hernandez said.

That’s when his nightmare began.

For five days the three reporters were kept captive in an isolated security house where they were starved, beaten and tortured both physically and mentally.

“The walls had bloody hand prints all over, there were strands of hair and some dental parts too,” Hernandez said, describing the room they were kept in.

He said that sometimes he heard the kidnappers talking about plans to kill them, but in a strange turn of events the kidnappers freed Hernandez and the other prisoners on the morning of July 31.

“They got us out of the car and told us to run and not look back, but we couldn’t – we were very weak,” Hernandez said.

At around 5 a.m. or 6 a.m. the kidnappers took Hernandez and the other cameraman to a secluded colonia in Gomez Palacio and freed them. As they tried to run towards freedom a group of armed policemen were already waiting for them not far from where they were left.

A reproduction of the main page of Diario La Prensa shows Alejandro Hernandez after his rescue by Mexican authotities. (Luis Hernandez/Borderzine.com)

Mexican authorities took Hernandez and the other two reporters to Mexico City where he was reunited with his family. On their way to Mexico City the reporters thought they were meeting President Felipe Calderon. Instead the two beaten and exhausted man were thrown in a room full of national and international media.

Hernandez later found out that the government would only grant him protection for 20 days, from August 1to August 19. After that, he was on his own.

After analyzing the situation and talking to his wife, Hernandez decided that going back to Torreon was not an option.

“I couldn’t go back I was afraid for my life and my family’s life,” Hernandez said. He then decided to ask his family in El Paso for help.

Although Hernandez never imagined a life in the U.S., he and his family moved to El Paso on August 2010.

“We are very grateful with this country for giving us an opportunity of making a new life here,” hr said.

Hernandez then applied for political asylum, with the help of attorney Carlos Specktor. After ten months of waiting he was granted asylum in August 2011.

“It has been pretty hard, even though most of the people are Mexican. It has been hard to get used to a totally different way of living,” Hernandez said.

For him living in a new country is a whole new world, from obeying the laws to the simplest things like the speaking a new language. “English is what has been the most difficult part for me,” said Hernandez. Hernadez was hired by Univision in El Paso right after obtaining political asylum. (Victoria A. Perez/Borderzine.com)

Even though El Paso is a city where most of the people speak Spanish in one way or another Hernandez has been taking English classes. “The only word I knew was (w)Juat?, ” said the cameraman.

Not everything is bad in Hernandez’ new life. He says he is happy because living in El Paso is a great opportunity for his children to have a better life.

“I have found wonderful people here, very kind and help full.” Hernandez said he never felt alone with people around him always helping in every way they could.

Hernandez had to do small jobs for a while to start his new life, painting houses, doing yard work and washing cars to support his family. While yearning for his profession as a reporter and dreaming of landing a job at Univision in El Paso.

“When the moment comes I am going to work there,” he told his wife, and immediately after getting his political asylum, he called the station, left his resume and was hired right away.

“Since September 15 up to now I am doing what I love the most, which is looking for the news camera in hand,” Hernandez said.

Despite having a great life here in El Paso, Hernandez said he misses his native Torreon. “What I miss the most about Torreon is my house, a little garden that I had, but most of all my family and friends… oh and the soccer team Los Santos de Torreon.”

Little by little Hernandez and his family have been adapting to their new life. Despite missing their old home, they say they feel very lucky that here they can feel safe and not worry about their lives.

Editor’s note: This is another in a series of Mexican citizens running from violence in Mexico.