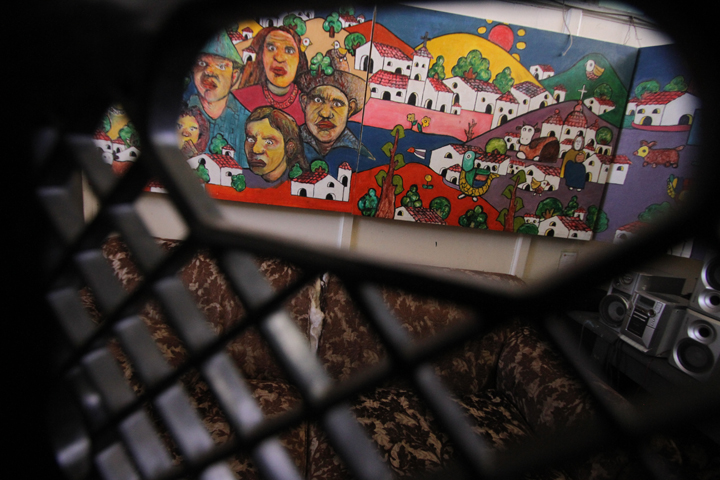 EL PASO – Patricia spends her days adjusting to a new life in the United States that she never intended on having.

Every day she plays her guitar and spends time with her family, who are also in El Paso out of necessity, not want. But some of her family members are not with her, some stayed behind in Patricia’s hometown in the Mexican state of Durango, and others were killed. It is because of those murdered relatives that Patricia and her family relocated to El Paso.

“It all started because the violence in Durango became really difficult,” Patricia said in Spanish. She asked that her last name not be used in this article. “My brother was leaving his house and a neighbor shot him in the chest and my brother couldn’t defend himself. He walked to our house but they followed him and they killed him with sticks and stones, as if he was an animal.”

Patricia said a second brother was blamed for the murder by police officers, and when a third brother started questioning why they blamed his brother rather than go after the real murderers, a group of sicarios, or hit men, found him and tortured him. Patricia’s family found their tortured brother a week later.

“He was badly beaten,” she said. “He was bloody, burned and they made him breathe in harsh chemicals. They may have even violated him. They had broken his skull and they hung him by his neck. He was still conscious but he didn’t want to tell us who hurt him because they would kill the entire family. Before he died, all he said was that the people behind the attack were very powerful and that the government was behind it. That’s how we arrived here, seeking help.”

Patricia, who is in her early 30’s, is not a typical immigrant. She is one of the thousands who seek asylum in the U.S. annually. According to the U.S. Department of Justice, the U.S. received 41,000 asylum applications from citizens of countries throughout the world as of February 2012. Of those, 6,133 were applicants from Mexico, which delivered the second highest number of applicants, second only to China, which delivered 10,717 applications. “So many Mexicans are never going to be able to get asylum, they are all getting denied and then we accept about 40 percent of all Chinese asylum cases—and in all fairness a lot of those Chinese applicants do deserve to have asylum, but these approval rates are so crazy,” said Taylor Levy, a former volunteer at the local Annunciation House, an El Paso shelter that provides housing for refugees from around the world. “I think this is because we have such a strong trading relationship with Mexico that if we start accepting asylum cases we’re saying that the government can’t protect them, which I think is true.”

In El Paso the grant rate for asylum cases for the fiscal year 2011 was 2 percent, with one asylum case granted and 64 denials, according to the USDOJ. However, the El Paso Service Processing Center lists seven asylum grants and 42 denials in 2011, also according to the USDOJ. It is not clear why there is a discrepancy in the El Paso asylum numbers.

The U.S., as a signatory in the Office of the United Nations High Commissioner for Refugees, has an obligation to provide protection to people who have been or fear they will be persecuted on account of race, religion, nationality, and membership in a particular social group or political opinion, according to Ruben Garcia, director of the Annunciation House.

Garcia is no stranger to the process of asylum and has dedicated his life to helping undocumented immigrants.

“Right now, because of the violence in Mexico, we have many families that have been directly impacted by the violence who then make the decision to flee Mexico, and when they flee, for many of them the only legal possibility is to seek asylum,” Garcia said. “It’s a very difficult, very complicated process.”

According to Immigration and Custom Enforcement officials, when a person first asks for asylum at an international bridge, an official from Customs and Border Protection will take them to an interviewing room where the person’s information is recorded. From there ICE will determine whether or not the person may be deported, detained in a detention facility or, as happens in most cases, if there is not enough room in the detention facility the person will be referred to a local church or shelter such as the Annunciation House.

“To flee has huge emotional, psychological, economic implications,” Garcia said. “Many of the people that have come to us are individuals that have literally grabbed their children and run to the border.”

The majority of asylum cases in the U.S. are handled defensively, meaning the asylum seeker’s case will be heard before an immigration judge and the man or woman will have a lawyer arguing against their case.

Garcia said that he has seen more cases handled defensively rather than affirmatively although more cases are won through the affirmative process.

Garcia said he feels it is important to understand just how traumatizing it may be to flee from home and said that the U.S. has failed to acknowledge how much of the violence in Mexico is the result of American drug habits.

“It’s connected to our consumption of drugs, it’s connected to our love affair with guns— because all of these guns that are killing people in Mexico come from the U.S.—it’s connected to this immense amount of money that flows back to Mexico as a result of drug sales, that then goes into corrupting the police, the military, the legislative process,” he said. “It’s all connected.”

Patricia is currently awaiting removal proceedings and has been staying at the Annunciation House since May.

“I never had the delusion of the American dream,” she said. “Now being here, having to learn a new city and to know that (my decision to flee) is at the cost of the death of my brothers is really painful… I don’t want to be here. Every morning I wake up and want to run and hug my mom and be in my house, but that just can’t be.”