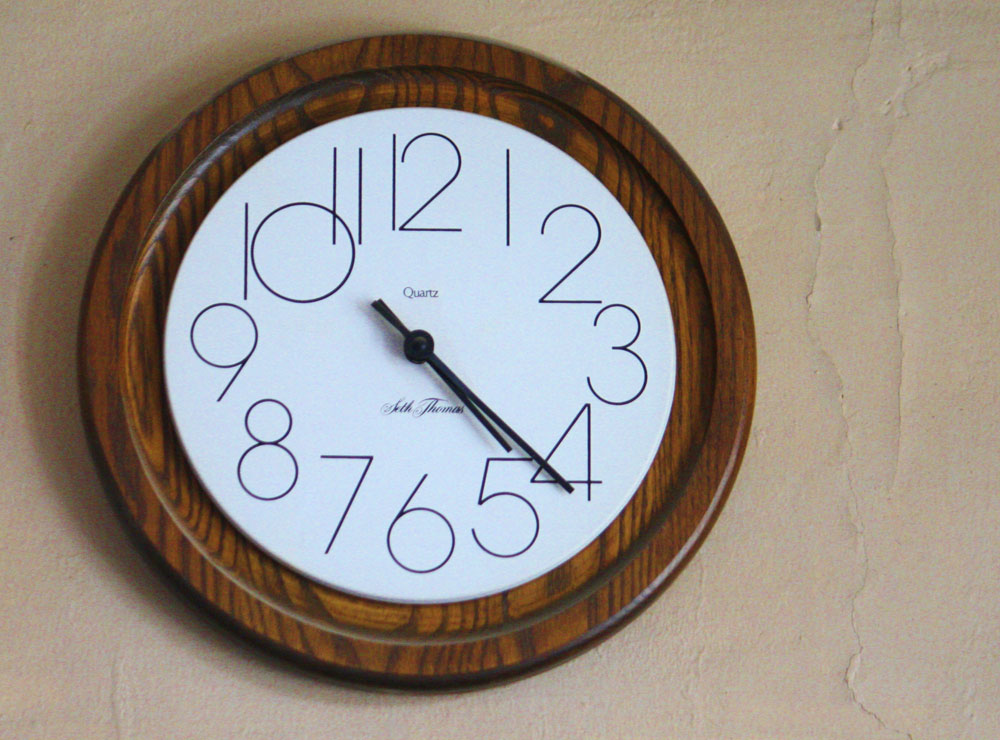 Time Standing Still: a Shadow on the Left and a Crack on the Right. (Cheryl Howard/Borderzine.com)

EL PASO – Old people say that the older you get, the faster time goes. Agreeing with them probably means I have joined their ranks. It is hard to get a grip on time as an objective phenomenon because we experience it so differently at different times in our lives.

We have measurements for time smaller than nanoseconds and longer than centuries, and we have all manner of time keeping devices to keep us all on the same page, so to speak, in mixed metaphors. Time has been measured by the ethereal shadows of the sun, by phases of the moon, by water and by sand, by movements of planets and stars, by candles and by incense, by pendulums, and in relation to special or cataclysmic events. Nowadays, digital and atomic have replaced analog and quartz. Has time changed or have we? What does it all mean? Time Standing Still: a Shadow on the Left and a Crack on the Right. (Cheryl Howard/Borderzine.com)

The languages we use are embedded in time or time is embedded in the languages we use. It seems important in most, but not every, culture, to distinguish activities that take place in the past, in the present and in the future. Thus we have different tenses for verbs, and subtleties of time, mood, and intent that drive a language learner crazy, but seem perfectly normal to a native speaker. Our lexicon is full of words and phrases that implicitly or explicitly reference time, such as speed, brunch, always, sunset. Phrases include a wealth of lore: “a time for every purpose under heaven,” “time is money,” “your time is now,” “running out of time,” “teatime,” “a stitch in time,” “a wrinkle in time,” “time share,” “time flies when you’re having fun,” “time to wake up and smell the coffee.”

Sometimes I think we are obsessed with time because it allows us to construct history, a way to sequence and order the events in the world and in our lives. An idea of time is necessary for one of our most treasured beliefs, the notion of cause and effect. We need a before and after to know where we have been and where we are going. Without it, we would be living in a very chaotic and disorderly world. Einstein says, however, that “the distinction between past, present and future is only a stubborn illusion.” Physicists and philosophers alike have mud-wrestled with the notion of time, usually in language so abstruse that regular folk refuse to mire themselves in it. Only the Shadow knows what time it is. (Cheryl Howard/Borderzine.com)

Time also seems to speed up or slow down, depending on a host of other factors that have nothing to do with time: whether we are bored or excited, anticipating a likely or unlikely event, wanting or not wanting something to end, where we are and who we are with. I remember, and you do too, how endless time seemed during summer vacations from school when we were children, or how it practically stopped while we were waiting for the magic birthday that signaled a driver’s license. Our memory of time shifts, and events are never remembered with objective accuracy, but imbued with emotion that also shifts over time.  Some details fade into obscurity while others, perhaps even invented details, shine ever more brightly as the years pass.

As a new year approaches on our agreed upon calendars, we plan parties and make resolutions for a future year, pretend that this is something more than the clock turning from 59 to zero, or the big hand and little hand both pointing to 12. Remember, it would be high noon if it wasn’t dark, but then it wasn’t dark here when a new year materialized in Australia. We can sit in front of our television sets and watch a new year emerge from a different location every hour, or we can put on a 1976 song by the Steve Miller Band “Fly Like an Eagle” or we can read a 1919 poem by T.S. Eliot, “The Love Song of J. Alfred Prufrock:” Do I dare
Disturb the universe?
In a minute there is time
For decisions and revisions which a minute will reverse.

We can roll up our trousers, stir honey into our tea, and contemplate the meaning of time now, as if it were yesterday… or maybe tomorrow.