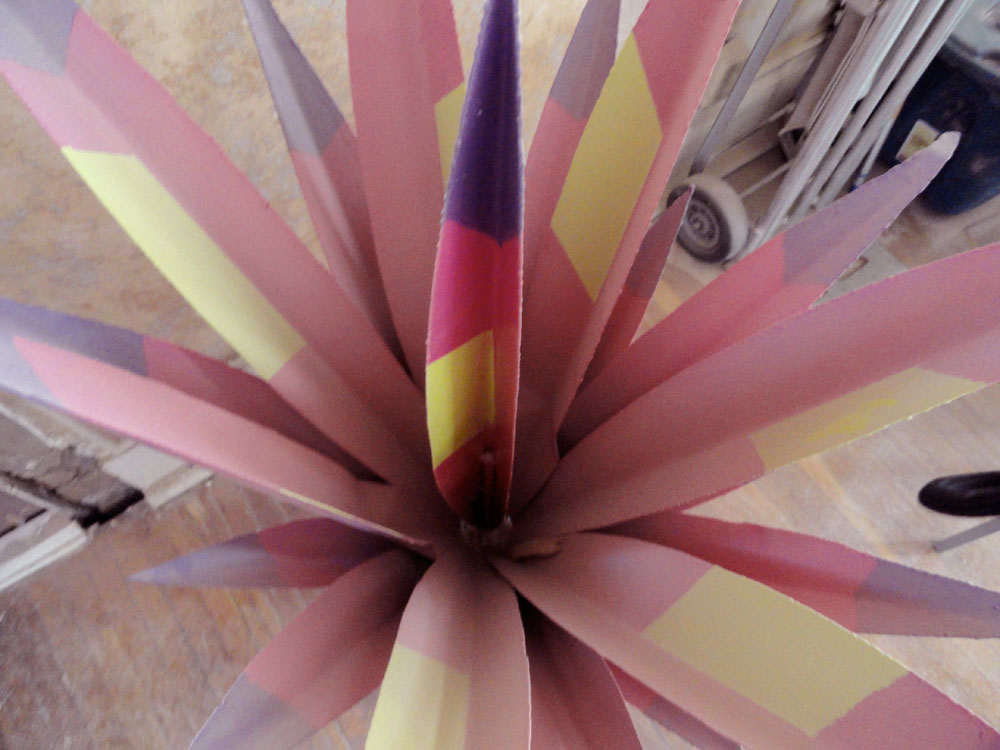 A rose agave, the emblem of the new gallery. (Christina Villegas/Borderzine.com)

EL PASO – There is a lag between a dynamic city’s ever-evolving culture and the art on display in its galleries, especially in a city permeated with tradition like El Paso, but Martha Arzabala plan’s to change that with her new art gallery, Agave Rosa.

One of the goals of Agave Rosa is to create a home for new artists, who may otherwise not have a place to show their work. “Agave Rosa is going to focus on Hispanic artists, because they are the ones that really don’t have support here. You see, the El Paso Art Association is [mostly] Anglo.”

Arzabala joined the El Paso Art Association in 2008. She volunteered to become the secretary and in one short year was elected vice-president. In 2011 she became president, but she resigned in May.

“I did not really go with the culture of the association, so we clashed. It was not their fault; it was not mine. I just decided to resign… and pursue Agave Rosa Gallery.” A rose agave, the emblem of the new gallery. (Christina Villegas/Borderzine.com)

She points out that it is only natural to support your own culture. “You go to Sasahara, and I love my friend Linda Noack, but again… its more Anglo type of artists. She knows more Anglo artists than anything else. Or you go to Bridget Barnes gallery, which is a casting gallery, same thing; because she is German she is supporting German artists.” Arzabala says that since she is Hispanic, she is going to try to support the Hispanic artists.

“I’m trying to get young people. If I go back to my example of El Paso Art Association, the average artist was probably 60 years old. When you get old, creativity and innovation decreases. A lot of artists don’t accept that.”

Then of course there are all the artists that are fleeing Mexic­o, like Hail Gamez, who was the best artist in 2010 in Chihuahua state, and Pedro Francisco Rodriguez who is a great sculptor. Both are going to join Arzabala’s gallery.

She laughs at the irony that her only two residential artists have Anglo names. “But of course, you cannot discriminate; I have Phillip Howard, and Romé Hawkings.”

She also wants to create a kind of community for these new artists, where they would give workshops to the other members, “Because 16,17, 18 year-olds are very passionate about their art.” She wants them to learn to speak and in the process learn about themselves as well. Arzabala says that many don’t think of El Paso as a place to find art, yet. (Christina Villegas/Borderzine.com)

That might have something to do with the fact that Arzabala herself is quite new to the art scene. She was originally an engineer in the automotive industry and decided to become a professional artist in 2008.

Her tendency to not accept longstanding perceptions about art seems to stem from the fact that she is new to the art world. “Usually the assumption is that only doctors and lawyers buy art, I don’t think so. I see more middle class buying art, because the trend you see now, in magazines, is original art.”

Just a few years ago, trends in interior design relied on factory-made “art” to fill a room with frames and sculpture, but now the trend is much more minimal. Having one original work in the room is much more desirable then a room cluttered with copies, she said.

“My plan for Agave Rosa is to have small things that can be a gift, a unique gift that doesn’t need to be expensive.” And because I have these new emerging artists, their art is very affordable.”

Arzabala has no desire to become the final authority on art in El Paso – just the opposite. She wants a wide and diverse market of art in the city. “I wish to see more galleries in this district. That would be great. You see one and you might not go to because it is isolated… but if we have four to five in the same district… you go because you have more options.”

Arzabala says that many don’t think of El Paso as a place to find art, yet. But there is something happening in the city.  More music festivals are being organized, more galleries are opening. “I want to include music, art and fine crafts.”

She envisions a day when art is a main attraction in El Paso. “Al Borrego did a great job in San Elizario, turning it into a kind of Scottsdale.” She is quick to point out that El Paso will never be like the art scenes there and in New Mexico and that is a good thing. “I don’t want to say that it will be like Santa Fe or Scottsdale, because our culture is different.”

But she believes that “there is a market for everything.  El Paso is getting to be a place where artists want to be,” and she wants Agave Rosa to be part of that future.