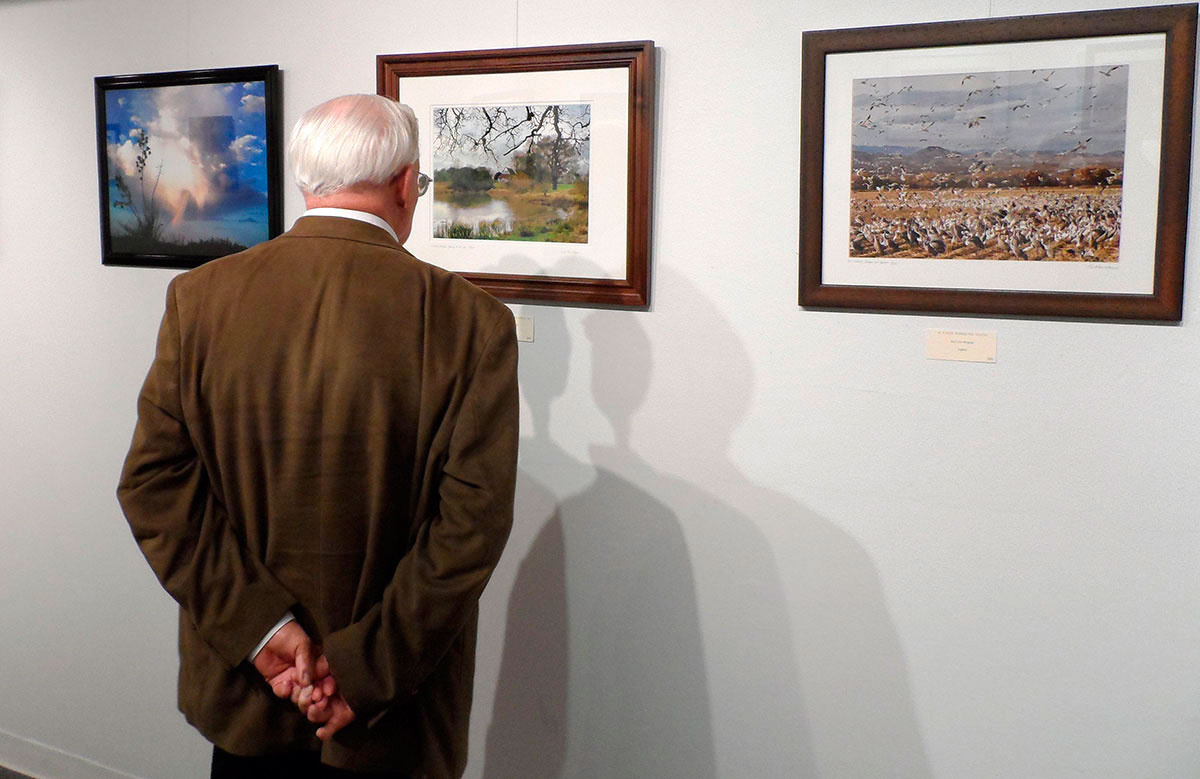 EL PASO – Photographs ranging from the beautiful scenery of the El Paso Mountains to the simplicity of a self-portrait dazzled spectators at the first annual “International Eye of the Camera” event at the Crossland Gallery.

“We were most pleased for a first exhibit like this, with the number of entries and the quality of entries,” said Joyce Ewald, office administrator of the El Paso Art Association.

The Art Association hosted the event November 30, which featured photographers from El Paso, Las Cruces, and Juarez.  The idea for the “International Eye of the Camera” came after the recent “Arts International” event, which excluded photographs because of limited space at the Crossland gallery. A total of 97 photographs were sent in, but the Art Association is hoping to see that number continue to grow at next year’s event.  “We need more photographers to get involved with the association.  If you want these events to happen you have to raise money” said Ernest L. Salazar, owner of ELS Photography, who also handed out one of the awards for the event.

The photo entries were judged by El Paso Times photographer Rudy Gutierrez.  He rated the photos based on content, composition, use of light, and how the picture made a person feel.  The photos were graded on a one to 10 scale and those that were rated a six or higher made it into the show.  A total 75 photographs were displayed at the Crossland Gallery.

“I was very impressed with the quality of the pictures that were submitted,” said Gutierrez.  “For a first ever show like this there was a lot of high quality pictures, from area photographers from both El Paso and Southern New Mexico.”

Studio owner Marty Snortum judged the show and awarded first, second, and third place awards to the 75 photos in the gallery.

Enrique Villar a participant in the event who has been photographing for seven years and has been published in numerous magazines and newspapers says, “It’s very encouraging to have a place like this and to be able to have a platform to show your work.” Villar was awarded the El Paso Scene Cover Art Award for his “Moonset” photograph. Next year, the “International Eye of the Camera” will take place in August.  “We need to have more art; we need to have it everyday,” said Rosie Villalobos an El Paso schoolteacher.

Manny Madole of Shepard Ridge Photography agrees.  “It’s long past due” said Madole.  “We really need more of this and really need to support this kind of art.”

Ali Keyes who was part of the five-member committee says that the Art Association has already set up plans for next year in August and that the event will last a month instead of two weeks like this year’s event.  “I did this so the artist could come and bring out their work, show their work and have other people appreciate their work,” said Keyes.  “Artists are doing something spectacular with creativity and hopefully people will come in and like what they see and buy it and put it up on their wall and enjoy it.”

Keyes said art is something you can enjoy for the rest of your life even if it is just a part of your life or all of your life.  “Don’t ever give up because you may not succeed at first but as you work on your art you progress your art becomes better you learn more and you will become a very good artist.”