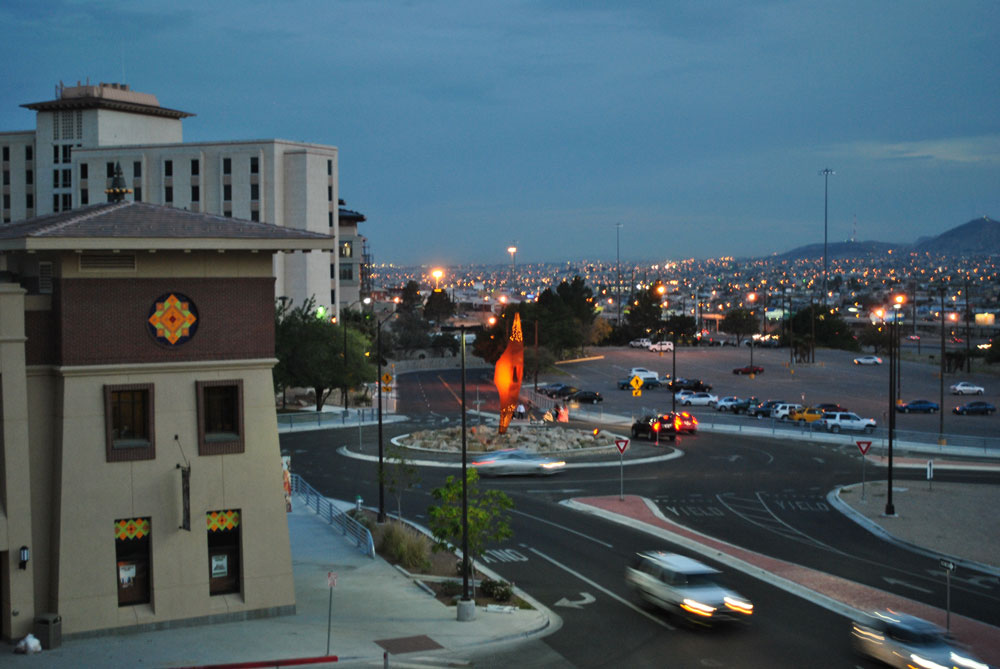 EL PASO – With an ongoing drug war on the other side of a 10-foot high fence, El Paso’s reputation has taken some hits recently, but locals see the Sun City’s image in a brighter light.

“It’s incredibly sad what’s happening across the border,” said Sonya Stokes, senior psychology student at the University of Texas at El Paso. “I think it’s terrible that El Paso’s image has been tarnished by irresponsible comments that people in power have made and the media has made.”

Over the past year, El Paso has made national headlines for a number of reasons. In November 2010, the annual Congressional Quarterly Press City Crime Rankings announced that El Paso had the lowest crime rate of cities with a population of more than 500,000.

In August 2011, an El Paso Times article said that El Paso officials were taking “the first steps toward ending its ‘sister city’ relationship with Juárez.” The story said that the city was surveying local business to get their insight on El Paso’s “safe” image with the constant violence occurring in their Mexican “sister city.”  The survey wanted to know if the violence in Mexico was “hurt(ing) El Paso economically by reducing its ability to draw businesses, conventions and conferences.” According to the article, “up to 41,000 surveys were sent to the business community.” The lights of Ciudad Juarez can be seen from the UTEP campus. (Danya Hernandez/Borderzine.com)

On Sept. 1, 2011, an editor’s note corrected the main premise of the article, stating that “the survey does not include a question about ending the “sister-city” relationship with Juárez.” City representative Susie Byrd said she had no idea about the survey.

In the UTEP community, some students still believe that the city’s image has not been tarnished by the ongoing violence and the two municipalities should remain sister cities.

“We should never forget the past. We should always look back to our culture, to our ties, because that’s what gives us our social identity,” said Manuel Garcia, a freshman pre-business major. “Without that, we wouldn’t be who we are. No matter who we are, we always have a past.”

The ongoing Republican presidential debates brought national attention to the issue that El Paso’s image as a safe city may be questionable. On Sept. 7, 2011, current-Texas Governor and Republican-presidential candidate Rick Perry mentioned the border city in a presidential debate. Perry said that “it is not safe on that border” due to the ongoing violence in Ciudad Juárez. In the same debate, Perry, aiming at President Barrack Obama, said that “for President Obama to go to El Paso and say the border is safer than ever, he either has terrible intel or is an abject liar to the American people.”

“I think that’s a load of lies, for lack of a better word. Honestly, I think El Paso is one of the safest cities,” Garcia said. “People can walk around and not get shot. It’s a very friendly place.”

Stokes, who is from Kokomo, Indiana and has been in El Paso the last three years to attend UTEP, said her family has showed concern because of the way the media portrays Juárez and El Paso.

“I get a lot of family members and friends calling me saying, ‘oh my gosh, are you ok?’” Stokes said. “I think it’s really sad because when you’re living here, you don’t feel unsafe.”

Stokes went on to say that the two cities should remain sisters for different reasons and supporting Juárez is crucial.

“Just by the shear fact that we’re geographically linked to one another, we are sister cities,” Stokes said. “We have people from Juárez escaping the violence and we have a responsibility, sharing the border with them to take action and to make a difference and do what we can to help. I don’t think that we should cut that relationship because it has a bad effect on what El Paso looks like.”

John Swann, a resident of El Paso for more than 33 years believes that the violence has leaked over to El Paso at times, such as when a stray bullet hit City Hall once and then UTEP’s Bell Hall in 2010. But he does not feel that the violence has crossed the border. He said that El Paso should not abandon its ties with Juárez because that generalization is inaccurate.

As the violence escalated over the past four years, businesses that began in Juárez have been opening in El Paso such as Crisostomos in 2009 and a second Villa del Mar in 2011. Both restaurants are located on the same block on North Mesa St. Rather than taking anything away from Juarez these new businesses are good economic signs for both cities, said Garcia.

While some may see the movement north of these businesses as a way to escape the violence and still make a profit, some students believe that the citizens of Juárez should take the lead to solve their problems.

“Honestly, I believe the best thing to do is actually get the people in Juárez motivated to take back their city,” Garcia said. “The reason the cartels are running around so rabid is because no one stands up to them. They’re so fearful that they’re oppressed, in a sense.”

Until that time comes, some still believe that El Paso should continue opening its arms to those affected by the violence.

“We have a really beautiful cultural heritage here and if anything, I think it’s made it richer and I think it’s really awesome that we can open our arms to people who are escaping such dire situations and we can provide them a safe haven,” Stokes said.