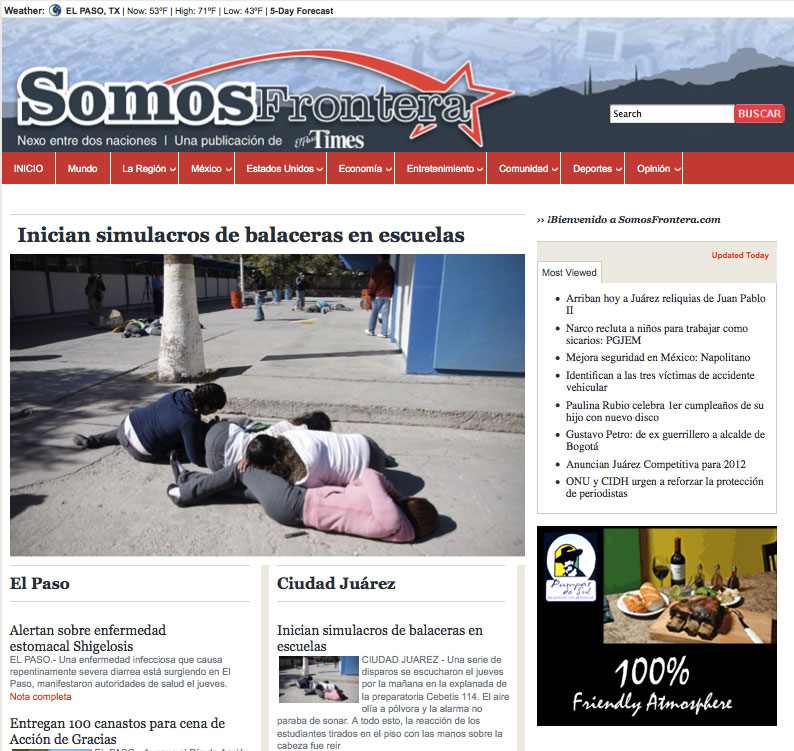 EL PASO – In El Paso somos frontera.  That means we are the border and The El Paso Times has adopted that reality as the name of its new Spanish language web newspaper.

Targeting an audience in a city that is ranked first in the U.S. in the number of people who speak Spanish at home, The Times launched SomosFrontera.com  on August 19. Spanish is the most commonly spoken language in the western hemisphere, including 16 percent of the U.S. population. Here in the borderland, Spanish is considered the most valuable second language for native English speakers.

The El Paso Times saw the need to launch a Spanish language product as the local population grew during the past fours years due to the influx of middle class immigrants fleeing the drug-related violence in Juárez and the wartime military expansion of Fort Bliss.

With thousands of commuters crossing the border from Juárez every day, Cárdenas aims to target the Juárez public on both sides of the border. With Somosfrontera.com they can receive news and be informed about El Paso and the surrounding areas.

Cárdenas said that although the violence in Juárez is constantly in the news and is a big part of the border story, she chooses not to focus exclusively on that aspect. Instead, Cárdenas said, she wants to emphasize the positive. SomosFrontera.com expects to highlight the efforts of the citizenry to regain their confidence in Juárez.

“Unlike other Spanish newspapers in this region, we are not going to focus our coverage on the violence,” said Cárdenas. “We are going to be covering violence of course because we can’t deny violence is there, but we really want to focus our efforts on the rebuilding of the city and how society is helping to recover the city.”

Somosfrontera.com will cover a wide variety of news from El Paso and the surrounding area, she said, and will strive to become a leading source of information that Spanish readers can access for their daily use.

“I’m glad the El Paso Times finally has a Spanish news site,” said Maria Tovar, a SomosFrontera.com reader, “I now can get informative stories in Spanish.”

Although SomosFrontera.com is still in the process of marketing the website, they plan to promote it by utilizing all aspects of technology. They are in the process of developing apps for cell phones to provide the latest and fastest news directly to readers.

“We really want to be the number one website that people here in El Paso have for news in Spanish,” said Cárdenas. “The plan is to get the most people that we can to read our website and become a source of information for people who want to read in Spanish about the border.”