EL PASO – Dogs, cats, birds, and even snakes can make nice house pets, but Corrie Simpson chose a miniature pot bellied pig. Corrie fell in love with Porky the moment she saw him on a friend’s ranch, knew instantly that it was meant to be and she had to have him. When Corrie first got Porky he was only about a month old and they both bonded instantly. She could carry him in her arms but that soon changed as Porky quickly ate his way up to over  50lbs. Porky will eat everything and anything is sight. 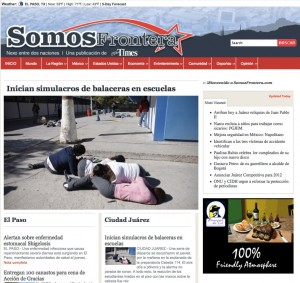 EL PASO – In El Paso somos frontera.  That means we are the border and The El Paso Times has adopted that reality as the name of its new Spanish language web newspaper. Targeting an audience in a city that is ranked first in the U.S. in the number of people who speak Spanish at home, The Times launched SomosFrontera.com  on August 19. “We saw the need to cover detailed information about Ciudad Juárez, about what’s going on in El Paso, and about what’s going on in Las Cruces,” said Editor in Chief Lourdes Cárdenas. Spanish is the most commonly spoken language in the western hemisphere, including 16 percent of the U.S. population. Here in the borderland, Spanish is considered the most valuable second language for native English speakers.

EL PASO – Since scorching temperatures, blowing dust, and dry air are the main features of El Paso’s desert atmosphere, sailors sailing on a vast blue ocean probably don’t come to mind here. But that’s exactly what the Amigo Airsho will bring when it highlights Navy Week, October 22 and 23. El Paso doesn’t have the Navy stationed locally, but that’s not an obstacle to the community’s  strong Navy connection. Locally there are hundreds of ties to the Navy that El Pasoans wouldn’t normally think of. The local Navy League has 150 retired Navy personnel.