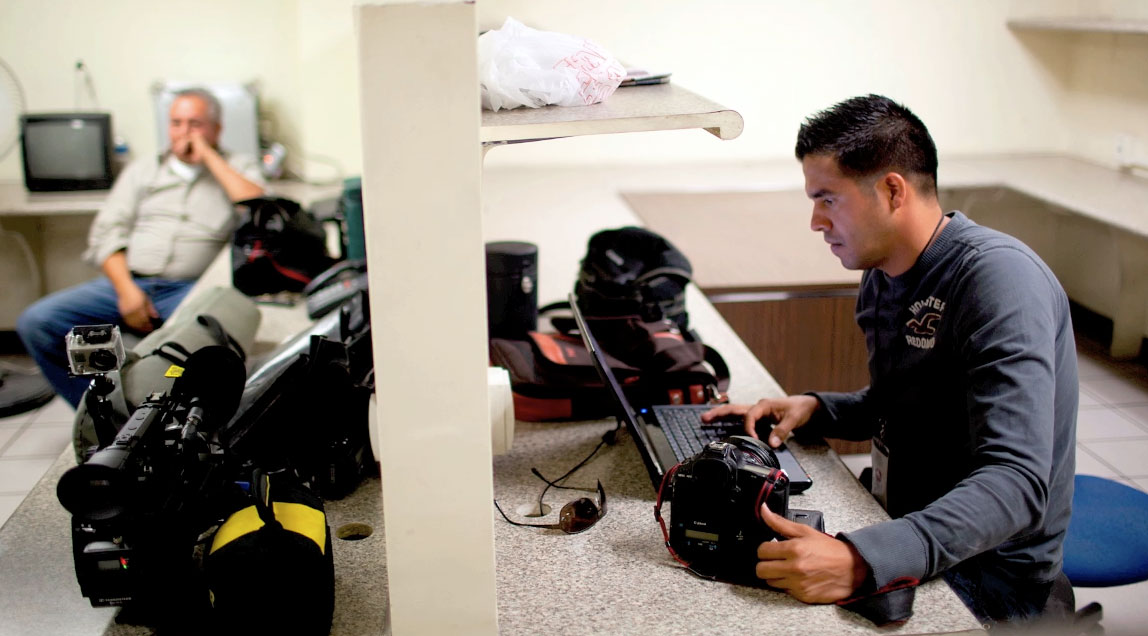 José Luis González, a photojournalist for El Norte newspaper, risks his life every to cover murder scenes at Ciudad Juárez as do most of journalists in one of the most dangerous cities of the world. (Ivan Pierre Aguirre/Borderzine.com)

CIUDAD JUÁREZ – Everyday journalists from all over the world make a pilgrimage to one of the most dangerous cities in the world, Ciudad Juárez, to try to document the city’s daily terror on its people.

I have gone into Juárez before to try to document that for myself, but this time I wanted to tell the stories of the journalists. Journalists who risk their lives to cover the thousands of murders that happen every year.

This was my attempt to try to get a small glimpse into what it takes to cover Juárez in a day’s shift.

For one day this past summer, I rode along with two fixers, and met a news crew from Sydney, Australia, a couple of photographers from El Norte newspaper, and visited the local state bureau of investigation.

You feel a little more safer driving around all over the city when you are with another journalist, and not just your hired fixer. In my case I hired a fixer named Jorge. I met Jorge on a previous assignment through another photographer. For those that might not be familiar with the term fixer, a fixer is a person who pretty much gets things done for journalists. They are usually from the area and drive you around a particular city that you may not know too well, and more importantly they try to keep you alive by knowing where it is OK to go and where it is too dangerous to work on your story. José Luis González, a photojournalist for El Norte newspaper, risks his life every to cover murder scenes at Ciudad Juárez as do most of journalists in one of the most dangerous cities of the world. (Ivan Pierre Aguirre/Borderzine.com)

The two-man crew from Australia were very experienced journalists. They were in the United States earlier in the week to cover the NASA space shuttle launch. As the producer stated to me over dinner, they usually travel in a team of five, but the brass back home felt it was safer to travel lighter into such a dangerous city.

One of the more interesting people I met was an elderly woman named Olga. Olga grabbed my attention because of her amazing facial features. She was very engaging and informative, but listening to her really made appreciate that I don’t live in such conditions.

I met a very lucky man named Luis Hernández. If you’re familiar with the video that was all over the news and the Internet that captured a car bomb in Juárez last summer, he is the journalist behind the video. He was merely across the street when the explosion happened. When he told me the story behind the video, he seemed very casual speaking about how he almost got blown up because of his job. If you’ve seen the video, you know it was anything but just a casual day at the office.

The more I hung out with the journalists from Juárez, the more it seemed to me that they were and have become desensitized to all the murders that happen in the streets everyday. But I also learned that journalists in Juárez have become a small brotherhood, so to speak. They try to inform each other on developing stories by constantly talking via walky-talkie and try to look out for each other by always being close together when they are at a murder scene because you never know who may not want a journalist there.

I have huge respect for these guys, they may not have fancy degrees from J Schools or have the best equipment, but they are the ones out there everyday risking their lives just so we can be in the know of what is going on over there. I’ve always said it is easy to fly in and cross over there, cover a story and be back in your safe country and safe newsroom that same night, but these guys not only work there, but live there. I asked myself a few times, how can these guys come out here each and everyday, risk their own lives and cover the blood of the streets. How?! Because they have to, for themselves and for their city.

One thought on “Chasing Death”