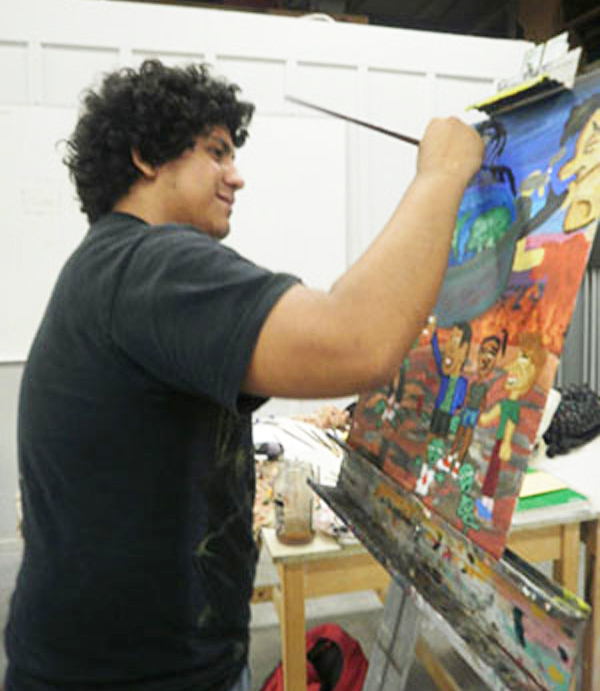 Imperial Valley College art students work around the clock to get their pieces done for first annual Juried Student Art Exhibition in the new Juanita Lowe Art Gallery on campus on June 2. Vicente Cardenas adds the finishing touches to his painting. --Photo by Katherine Ramos

IMPERIAL, Calif.–Clouds of black smoke hover over a rendition of Earth as three teenagers watch from below the globe, drinking and taking long puffs from cigarettes in their hands, while at their feet little green creatures lay on the ground suffering from unknown maladies. Imperial Valley College art students work around the clock to get their pieces done for first annual Juried Student Art Exhibition in the new Juanita Lowe Art Gallery on campus on June 2. Vicente Cardenas adds the finishing touches to his painting. --Photo by Katherine Ramos

Surreal, yes, but with one final dab of paint, and a few brushstrokes, Vicente Cardenas’ untitled painting is ready for the new student art gallery at Imperial Valley College.

“It’s pretty radical,” said Cardenas, 19. “Never had my stuff shown to the public before. It gives you the intense feeling that you’re being heard.”

The Juanita Lowe Art Gallery, named in memory of the art program’s founder who died in December 2010, will officially open its doors with a ribbon-cutting on June 1, followed by the Annual Juried Student Art Exhibition on June 2. Close to 200 pieces of student artwork will be displayed, including Cardenas’ painting.

“It’s going to be a positive place,” said Tom Gilbertson, IVC drawing instructor and gallery chairman, “for the whole community. The valley hasn’t had a place for art since the old gallery burned down.” The original art gallery, which was housed in an old train carriage at Pioneer’s Museum across Aten Rd. from the college, was destroyed in an electrical fire five years ago.

The addition of the gallery to the IVC art program, and the valley community, is a boost to student and faculty morale in the wake of a statewide budget crisis. The department could not escape 10 percent in material cuts as well as elimination of some classes, like the ceramics and sculpture classes, which won’t be offered in Fall 2011. And other planned events for the art department could be way-laid by budget constraints.

“We’re supposed to get renovations done to the (1300) building, but that’s after the new tech building is built and I’m not sure when that’s going to start,” says Carol Hegarty, the painting instructor and head of the humanities department. “It’s kind of a rough time.” The new art gallery is situated in the IVC cactus garden. The original campus art gallery was destroyed by fire five years ago. --Photo by Katherine Ramos

Despite budget constraints, artistry has flourished among IVC students. Zachary Shermont, although not an art major, recently sent two paintings to the Modern Eden and Wall of Roses modern art galleries in San Francisco.

“The art class got me to start doing art,” says Shermont. “Just being in here has got me to start painting again.” He hopes to have 15 pieces ready in time for entry in the new gallery’s first show.

There are few chances for local art students to showcase their work in the valley other than across the border in Mexicali, according to both students and faculty. The new campus gallery will afford students like Cardenas a first-time venue.

“We’ve made due with almost nothing,” said Gilbertson. “This is the first thing we’ve gotten in a long time.”

While the college has had to cancel the 2011 winter and summer semesters, cut classes and staff across the board—and the budget doldrums are far from over at this point, according to college administrators—the idea of building, opening and manning an art gallery has raised some eyebrows. Art instructor Tom Gilbertson explains to his students the importance and proper skills to create their own mattes for their works. Not all work needs a frame, he says, but it's good to have when a gallery requests work from artists. --Photo by Katherine Ramos

The more than $222,000 spent so far on construction of the 1,600-square-foot gallery was approved by the IVC board of trustees and came from the college’s building fund, or redevelopment agency funding, as well as money from insurance on the gallery that burned down in 2006. And Gilbertson suggests it will be self-sustaining.

“The students of the gallery class will be the ones running it and taking the entries for the show,” says Gilbertson about the management of the art gallery.

Several shows and other events have already been planned for the fall semester, including what Gilbertson calls a cell-phone film festival and shows for local valley artists, both students and professionals.

No fee will be charged for the admission to the inaugural show, which runs from June 2-10.

Hey there and welcome to my profile! My name's Katherine, I live in Brawley CA with my family, and currently take classes at Imperial Valley College. I'm majoring English and art, emphasis on creative writing in the English major. I'm hoping to transfer to the university level after get my core classes done here at IVC.