WESTMORLAND, Calif.–About 40 miles north of the Mexican border in southeastern California is a large, salt-water lake known to the world as the Salton Sea.  It is the largest inland sea in the world, and the saltiest. Originally a small piece of ancient Lake Cahuilla, the Salton Basin is about 380 square miles and ranges in depth to a maximum of 51 feet.  In 1905, dams used to diverge the Colorado River failed, flooding the basin without stopping until 1907.  Since then the sea has been fed by natural runoff from surrounding mountains and agricultural irrigation. Throughout the last 100 years, the sea has had periods of shrinking and expanding shorelines along with large die-offs of fish and fowl, creating a reputation for the lake as a “dead sea” in the public’s eye.  Part of the blame lies with rising salinity in the water, which is currently 10 times saltier than the Pacific Ocean. Along the shoreline is the Sonny Bono Salton Sea National Wildlife Refuge–2,200 acres of freshwater marshlands and home to more than 460 species of birds.  The Salton Sea’s salty waters are the refuge’s habitat. Dozens of proposals over the last 20 years to “fix” the Salton Sea have gone no where. 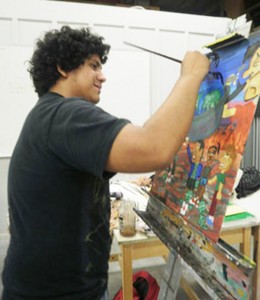 IMPERIAL, Calif.–Clouds of black smoke hover over a rendition of Earth as three teenagers watch from below the globe, drinking and taking long puffs from cigarettes in their hands, while at their feet little green creatures lay on the ground suffering from unknown maladies. Surreal, yes, but with one final dab of paint, and a few brushstrokes, Vicente Cardenas’ untitled painting is ready for the new student art gallery at Imperial Valley College. “It’s pretty radical,” said Cardenas, 19. “Never had my stuff shown to the public before. It gives you the intense feeling that you’re being heard.”