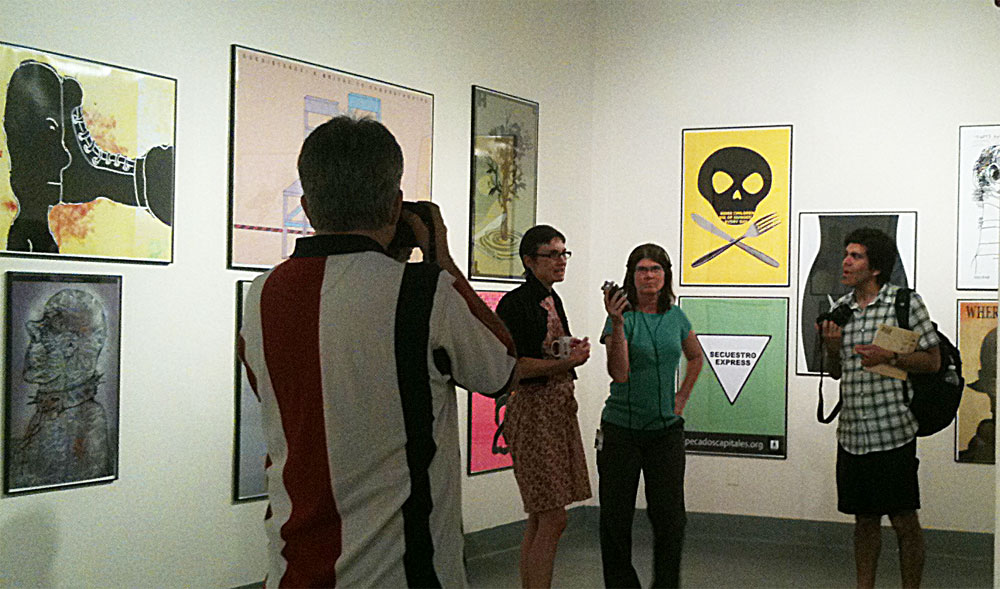 Twelve journalism professors were welcomed in early June in El Paso where the temperature hit 110 degrees. “Summer started earlier for me,” I thought.

We all had been selected to participate in a multimedia training geared to journalism professors who teach in cities with a large Hispanic population. The chosen states? California, Florida, Texas and Illinois. Thanks to a grant provided by the Dow Jones News Fund, the Borderzine.com publication organized this training at the University of Texas, in the border town of El Paso. The goal of this experience was to learn and practice new storytelling skills through the use of current technology.

The participants had different journalistic experiences. Some were specialized in photography, writing, broadcast or radio, to name a few. Coming from the premise that a modern journalist needs to become a “know-it-all” (that’s what the current media organizations are looking for and recruiting,) academics need to go beyond their fields of specialization and learn about more ways to communicate.

We got to the Lone Star state on Sunday, June 6 and left on Saturday, June 12. We had five really intensive days of work ahead of us, and we were all ready for the challenge.

This is how the training went: Day 1. Class started at 8:30 a.m. This first day we received instruction in audio gathering, digital photography and Photoshop. With an hour for lunch, we continued this training until 6 p.m. We were organized in groups of three people each and were given a topic to base our projects on. My team, formed by the photojournalist John Freeman, multimedia professor Elizabeth Marsh and I, a visual journalist, got “The Mexican Revolution” topic. Each participant chose a platform: audio, video and photography.

We brainstormed ideas and decided on three approaches to the subject matter: John would work on a video presenting how El Pasoans were getting prepared to celebrate the occasion, Elizabeth would produce a radio clip on how much the locals knew about the Mexican Revolution and if so, what they were doing to celebrate it, and I, a photo and audio show on a poster exhibit at an art gallery in El Paso that presented work related to the Mexican Revolution.

That night we researched the centennial of the 1910 Mexican Revolution to prepare for the interviews.

Day 2. In the morning we discussed our assignment topic and the platforms we were going to use. I had photography. As this was the reporting day, we had three interviews lined up: the Consul General of México at El Paso, the Cultural Attaché of the consulate, and the gallery curator of the exhibit. First, we visited the downtown area looking to interview people for the radio clip and to gather audio. We stopped at a flea market where we talked to locals. Later, at the consulate, we interviewed folks who were waiting to be helped by the consular officials.

Our first big interviewee was Roberto Rodríguez,  Cónsul General of México. That interview was conducted in English. Then, it was the Cultural Attachés turn, Enrique Cortázar, who preferred to be interviewed in Spanish. These are the opportunities when I really value to be bilingual. Then we went to the art gallery and interviewed the director Kate Bonasinga, in English. This exhibit had actually two shows: the first on old posters from Mexican artists that dealt with the Mexican Revolution and the second, posters of modern Mexican artists who created their posters inspired by social issues that incite change.

I had brought a digital recorder along with my camera so I was recording audio as well. Since the poster exhibit was my topic I used my time wisely, interviewing and photographing at the same time. I actually needed a third arm in order to multitask.

We went back to the classroom to download the materials to the computers.

Day 3. We started with training in digital video-post production and Final Cut Pro, followed by audio production training. After lunch I started editing the audio I had gathered the day before by using Garage Band. There was a problem: some interviews were significantly different in volume level, so I spent a big chunk of time adjusting the sound levels to make it even. Then I wrote a script for a voice over to present the piece and for another portion where I added more information using it as a transition to unite two sequences. After a short rehearsal I recorded the voiceover at a studio, split it in two parts and added it to the audio track. Then I finally exported it so it became one unit.

I left the classroom at 8 p.m.

Day 4. I worked on the photo editing. I chose 92 photos from the photo shoot and opened each one in Photoshop. I cropped and toned them appropriately so all of them would be sharp, even, well balanced and clear. That took several hours.

Then I imported to iMovie the audio track I had made the day before. At that moment I wasn’t feeling too confident to edit my piece in FinalCut Pro, instead of iMovie, since we only had three hours of instruction. We all were rushing against time.

I started placing the photos in iMovie and creating a sequence by aligning them to the sound track. This is the part where I synchronized image and audio.  At this point I was putting the whole package together.

Day 5. All the participants needed to have our projects ready at 3 p.m., so time was of the essence.

I worked on the timing given to each of the photos, adding the Ken Burns effect to offer more dynamism to the static photography (you have to be careful where you do it, otherwise it becomes too distracting) and also worked on the credits and lower-third information (to identify the subjects in the story.)  Some photos needed more time on the screen, especially the ones that present written content (like the posters do,) so I had to be careful with that. One of my interviewees spoke in Spanish so that sequence needed subtitles in English. Be mindful of the font and type size you want to use.

This whole process gave me a real life experience of how involved and time-consuming can a multimedia production be. I always took into consideration the length of the piece. We were not supposed to go over 3 ½ minutes. My piece lasts 3 minutes and twenty-three minutes.  You can see it here!

Elio Leturia is an associate professor at the Department of Communication of Columbia College Chicago where he teaches multimedia journalism and graphic design. He has worked for the Detroit Free Press, !Exito!/Chicago Tribune and El Comercio in Lima, Peru. He has also been an assistant professor of graphic arts at the Universidad de Lima School of Communications for 10 years. His design work has been recognized by The Society for News Design and the National Association of Hispanic Journalists and the Associated Church Press. He is a Fulbright scholar and holds a Masters in Journalism (1992) from the University of Illinois at Urbana Champaign, a Licenciatura degree in communications and design (1989,) and a bachelor’s degree in Communications (1981) both from the Universidad de Lima, Peru. Elio Leturia is also a writer and a blogger in English and Spanish, and his articles have appeared in publications in the US and abroad. He maintains the blog of the Fulbright Association-Chicago chapter, where he is a board member. Leturia is also an ensemble theater actor with Aguijón Theater in Chicago.