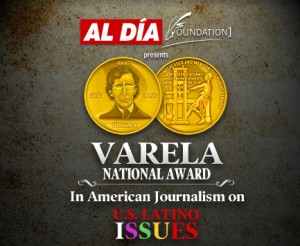 PHILADELPHIA – The Félix Varela Awards for Excellence in American Journalism, the awards established 4 years ago by the AL DIA Foundation, will be, for 2012, also a celebration of one of the pillars of the US Constitution, the First Amendment. The Varela Awards will recognize the best feature writing, best blogging, best documentary, and best photojournalism on Latino and Multicultural Issues in America. The VARELA Awards, offers the largest cash prize in its category, giving $10,000 per award, along with a golden medal of Father Félix Varela, an American intellectual of Latino origin who had a great impact on 19th Century America. The announcement was made at Temple University’s School of Communications and Theater in Philadelphia, PA, by the Chairman of the AL DIA Foundation, Hernán Guaracao, and Temple University School of Communication and Theater’s Interim Dean,Thomas Jacobson. They officially opened the competition, calling for submissions between now and August 2012.