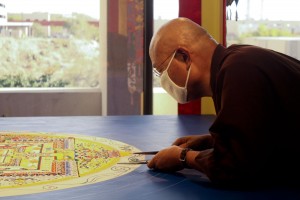 EL PASO – Dressed in brown robes and a white dust mask covering his mouth, a Buddhist monk hunches over and inspects the mandala – a circle decorated with multi-colored sand he is in the process of constructing on a wooden scaffold. The monk then straightens up, takes a deep breath and hunches back down. He meditates about peace in the borderland while scraping a few grains of colored sand off a metal tube and depositing them on the forming artwork. The monk creating the mandala, the Venerable Losang Samten, is a retired professor and spiritual director at the Tibetan Buddhist Center of Philadelphia and has been visiting El Paso for over 20 years, almost since he first came to the United States. “I was born in Tibet, but when it was attacked I moved to India with my family, I was 11 years old,” Samten said. 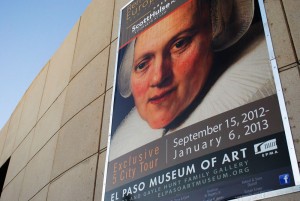 Understanding the Baroque through paintings, music and theater

EL PASO — Using words such as chiaroscuro, castrati, and rima to describe paintings by Caravaggio and other Italian artists, Jon Seydl explained the blend of music, poetry, and theater in Baroque paintings. ‘The Lute Player,’ a painting by Caravaggio in the late 16th century was one of the images explained by Seydl. It portrays an androgynous figure believed to be a castrato in a camerino, a small room in houses used for private performances. In the image, the castrato is playing a lute, a violin, a tenor recorder, a spinetta, and a musical score in front of him. This painting is a perfect example how the different aspects of the Baroque culture are shown in the paintings.

Fantasy, flair and geekdom blur the lines at this year’s comic book convention

EL PASO — A man in a panda costume walks lazily into a conference room where other people are dressed up as Storm Troopers, Iron-Man, and Pokémon characters and sits down with leisure waiting for the next panelist to arrive. Costumes are a regular sight at a comic book convention, however the panda still elicits an “Oooh! A panda!” comment from a small girl in the crowd. The conference room, located in the El Paso Convention Center was part of this year’s El Paso Comic Con (ep-con). Hosted September 14th through 16th, EP-CON gathered people in El Paso for the third consecutive year to celebrate both comic books and pop culture.