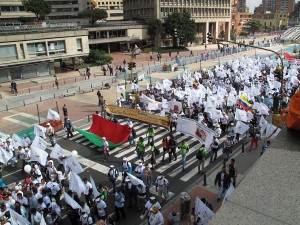 A white river for peace

BOGOTÁ, Colombia – It is said that during the years of extreme violence, around 1965,1 the water in Colombian rivers gradually turned red, until one day it was impossible to see the bed of polished stones that used to look like prehistoric eggs. The red streams reached the Magdalena, changing its color so menacingly that many feared that soon the Atlantic Ocean would become a red sea. Listening to Colombians speak about “la Violencia” in such terms one might be inclined to think about the persuasive hyperbole characteristic of Gabriel García Márquez. Such belief is reinforced by the swiftness with which they go from discussing “la Violencia” to narrating the origins of Ballenato. They say that early in the Twentieth Century a German merchant ship loaded to the gills with accordions sank near the Colombian shores.

In fact, it only takes a simple metro ride to get a sense that the idea of “a typical” Parisian woman—or man, for that matter—seems more of a fiction than a reality. If, for instance, you ride the metro from Odeon to Chatelet—two central and important metro exchanges—you will probably see a number of Parisian women who would not match the “typical” description: from college students wearing chador to women wearing Benetton garb, from girls in military fatigues to women in Senegalese kaftans.