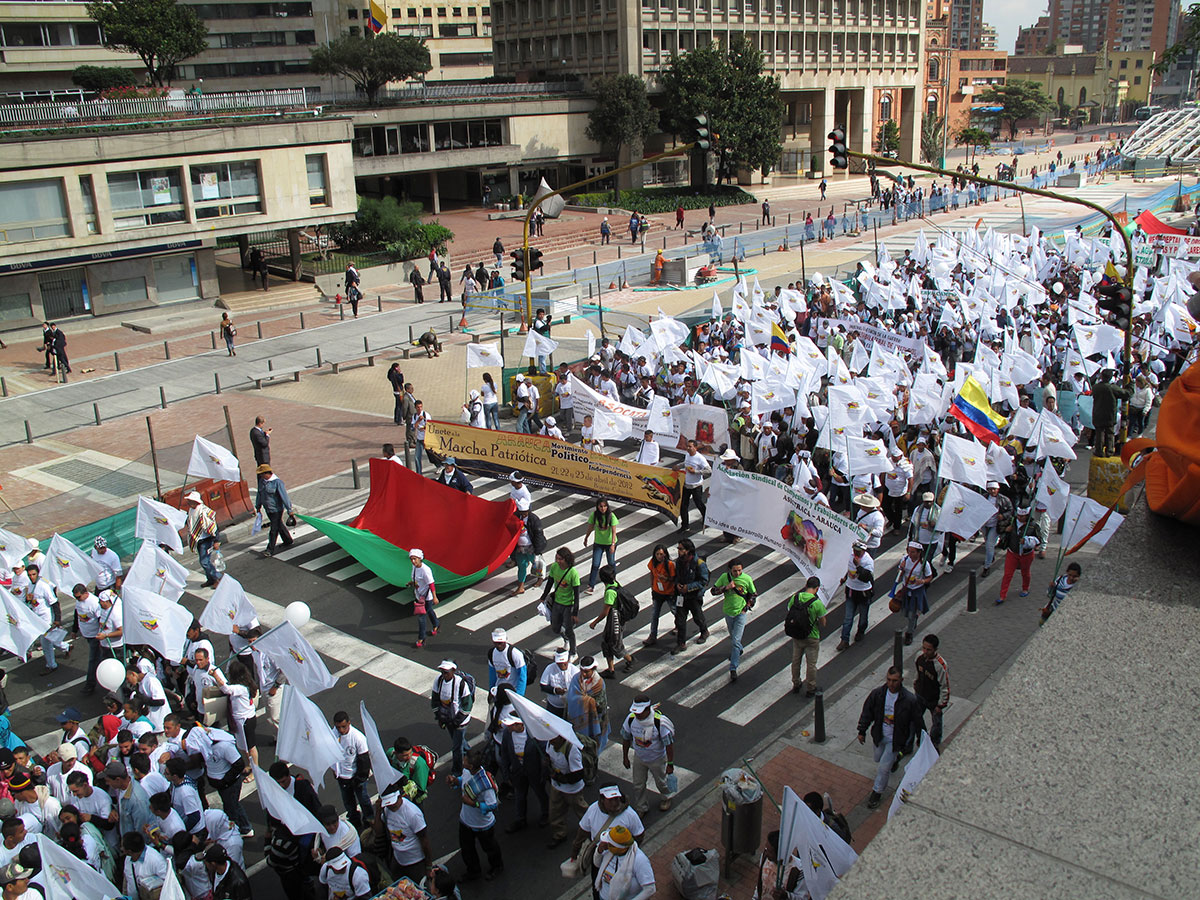 BOGOTÁ, Colombia – It is said that during the years of extreme violence, around 1965,1 the water in Colombian rivers gradually turned red, until one day it was impossible to see the bed of polished stones that used to look like prehistoric eggs. The red streams reached the Magdalena, changing its color so menacingly that many feared that soon the Atlantic Ocean would become a red sea. Listening to Colombians speak about “la Violencia” in such terms one might be inclined to think about the persuasive hyperbole characteristic of Gabriel García Márquez. Such belief is reinforced by the swiftness with which they go from discussing “la Violencia” to narrating the origins of Ballenato. They say that early in the Twentieth Century a German merchant ship loaded to the gills with accordions sank near the Colombian shores. The instruments, aided by compartments full of air, floated to the coast, running aground on the beaches like strange sea creatures made of brass, ivory and leather. The villagers, surprised, picked them up, and it did not take long before they incorporated the bizarre instrument into their music, and thus Ballenato was born. But if the latter sounds like a literary invention, the former is, sadly, very close to reality. Many would argue that “la Violencia” has roots in the Nineteenth Century, when the two most influential political parties of the time, the Liberals and the Conservatives, engaged in the “War of the Thousand Days” that caused 120,000 deaths. Nevertheless, the root of the late Twentieth-Century incarnation of “la Violencia” can be traced to April 9, 1948, when Jorge Eliécer Gaitan, a liberal and land-reform leader considered a menace by the conservatives, was gunned down at 1 in the afternoon, as he was leaving the Edificio Agustín Nieto, his office, located at the corner of Carrera 7 and Avenida Jiménez, a mere four blocks away from Plaza Bolivar. Gaitán’s followers did not take his assassination lightly. The ensuing confrontation, which in Colombian history is called the “Bogotazo”–alluding to its explosive nature–escalated into a virtual civil war with more than one hundred thousand casualties during the first ten years.

In the 1940s, traditional and better-off families still lived in downtown Bogotá, but when the “Bogotazo” destroyed most of its buildings (including the Edificio Agustín Nieto), they all moved to the outskirts of the city, leaving a vacuum that over the years was gradually taken over by borderline illegal activities. The houses and buildings still standing around Carrera 7 and Calle 22 were turned into brothels and cheap by-the-hour motels, and the theaters in the area transitioned exclusively to porn. Not far from downtown, the neighborhood called El Cartucho was also abandoned, and after receiving the influx of those displaced by the war, it was also taken over by drug dealers and drug addicts seeking their fix of the day. By 1990, El Cartucho was considered the most dangerous neighborhood in Bogotá.

But the biggest impact of the “Bogotazo” was the escalation of the civil war. The leader that emerged in the late 1950s, Manuel Marulanda Velez, “Tirofijo,” began organizing the Fuerzas Armadas Revolucionarias de Colombia (FARC), a guerrilla movement inspired in the Cuban Revolution of 1959. Other guerrilla forces sprouted alongside, such as the Ejército Popular de Liberación (EPL) and the Ejército de Liberación Nacional. Their immediate goal was to lead a communist revolution in Colombia, but in the protracted confrontation that ensued none of them ever acquired the critical mass necessary to excerpt systemic social change.

One of the issues at stake, as in other class struggles in Latin America, was land ownership. In fact, the first conflict between liberals and conservatives was about proposals for an agrarian reform that would effectively have transferred land ownership from a few families to thousands of peasant communities. This point of contention, already central in the “War of the Thousand Days” back in 1899, and perhaps the biggest factor in the assassination of Jorge Eliécer Gaitán, was still an issue in 1978, when the FARC had grown from a small movement of ragtag guerillas to a small army of more than three thousand people.

But this organized military force did little to secure land ownership for thousands of displaced peasants, who, having no other means of subsistence, began cultivating coca as soon as they could settle away from the front line. The FARC leaders were put in a hard position. The fact that they controlled territory where coca was produced began eroding their political capital, but they could not offer peasants alternative crops, nor push for social change. Perhaps realizing this quandary, and the possibility of a diminishing military importance, the FARC leaders agreed to begin peace talks.

They have continued for the last thirty years. In the process, some of the guerrillas have transitioned to Colombian democratic life, becoming bona fide politicians, while others have changed their tactics from guerrilla-style sallies to the kidnapping of important political figures, such as Ingrid Betancour, held hostage from 2002 to 2008. The last push towards a negotiated peace began in Oslo, Norway, in October 2012, and talks have continued in Havana. Ivan Marques, head of the FARC, and Humberto de la Calle, representative of the Colombian government, now face the difficult task of reaching a permanent cease fire.

It is with such perspective, that on April 9, 2013, commemorating 65 years of the assassination of Jorge Eliécer Gaitán, more than one million Colombians took to the streets to demand what they called “The Second Independence,” their right to be free of “la Violencia.” Early in the day, the city woke up with the sense of anticipation that proceeds historical events. Many streets were closed, and the local police deployed their urban forces, including their mounted unit. They were not out to contain the protesters but to ensure their safety. Carrera 7, one of the main avenues in Bogotá, was filled with people from all walks of life, but mostly peasants who had come from nearby villages. Many wore white T-shirts, a white hat, or even a white scarf, but all of them waved white flags. The view was impressive. The hundreds of thousands of white flags looked like a river ready to flow towards Plaza Bolívar.

Simón Bolívar, the Venezuelan who in the Nineteenth Century successfully lead the Wars of Independence against Spain, dreamed of a country he called the Great Colombia, which was to encompass Venezuela, Colombia, Panama and Ecuador. He argued that Latin Americans had more commonalities than differences. Something that rings true even today, as it is difficult to ignore that Bogotá has more in common, say, with Lima than with New York or Paris. But looking at the people marching for peace, one could see that, though they were brought together by a common interest, their motivations were not always equally aligned. There was a group, for instance, demanding a stop of the raids against coca growers, while another group called for immediate demilitarization, and yet another wanted legislation that would make the cultivation, processing and commercialization of coca legal. Nevertheless, in spite of their differences, it is no small feat that more than one million people would march demanding peace.

It was not an spontaneous outburst. Proposed by Gustavo Petro, mayor of Bogotá, and the grass roots organizations Marcha Patriótica and Colombianos y Colombianas por la Paz, the march took months of planning. People were brought to Bogotá before sunrise, provided with food, water, white flags, and taken back home at the end of the day. Late in the day, one could still see a hundreds of stragglers in the corner of Carrera 7 and Diagonal 26, sitting in the parks or gathered around a street vendor, as they waited for the buses that would take them back home. The press coverage, regardless of their own political agendas, was unable to ignore the strong message that such a monumental effort was sending to the representatives of government and guerrillas in Havana.

Marches are an expression of the will of the people but sometimes they cannot excerpt change without a political organization to keep the struggle going. In this case, some might be inclined to think that, however impressive a march of a million people might be, peace is too big a change for Colombia today. Nevertheless, Colombians have shown that they can change their reality, sometimes in dramatic ways. For instance, the once extremely dangerous El Cartucho neighborhood is now a large, peaceful park called Tercer Milenio.

Downtown Bogotá has experienced a similar turn. Universidad Central, a visionary, youthful university, decided to take over the red district, buying former brothels and porn theaters, and transforming them into a vibrant cultural hub. Concurrently with the march, Universidad Central hosted a major academic conference, “Three Days With J.M. Coetzee,” in which the Nobel Prize winner himself was present. Bogotanos attended massively to listen to academic papers, the readings by J.M. Coetzee, and participate in a host of other activities. Walking around the neighborhood with recently renovated theaters, cafés, conference rooms and libraries, no one would have suspected that only a few years before that those streets were considered unsafe and abandoned.

The airs of change do not stop there. Like many other Latin American metropolises, Bogotá has an impressive bullfighting ring, the Plaza de Toros de Santamaría, less than a mile away from downtown. It was not only a tradition, but also a well established economic activity, both of which are deeply embedded in Colombian culture. But in the past years, a number of groups began voicing their concern with a practice they considered cruel to animals. Listening to their complaints, Gustavo Petro decided to ban bullfighting in Bogotá as of 2013. There were a few outraged complaints, but all in all, Bogotanos accepted the changing times, looking at the end of such a long tradition as part of the transition into a more humanitarian world.

It is unclear whether peace would be achieved soon. The economical interests that fuel the current violence are too deeply rooted to be overturned by decree. Drug production is still a big economy within the economy, and the military control of certain areas is funded by drug money, but it is not only the drug dealers who benefit from such arrangements. Hundreds of farmer’s livelihoods depend on their coca production. Hundreds of families have developed, or failed to develop, under drug trade pressure.

It is a situation that has no easy answers. Legalization is anathema to many, including the most progressive political movements, but banishment has proven ineffectual in the past thirty years. Gustavo Petro has argued for what he calls “Centros de Atención Médica para Adictos a las Drogas,” centers for the legal consumption of drugs, as a means to curve the drug trade, but his proposal has not gained traction. Nevertheless, without a permanent solution to the drug trade, “la Violencia” will not end in Colombia. The “Marcha por la Paz” shows that Colombians want change, they deserve one, but it is up to everyone to contribute to a peaceful, lasting solution that will allow us to see under the clear waters of Colombian rivers huge white stones like prehistoric eggs.