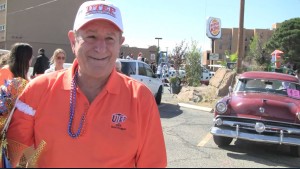 EL PASO – With downtown in the throes of redevelopment, entrepreneurs are more motivated to stay here instead of taking their business elsewhere, but Ray Malooly credits his success with staying in the Sun City. Malooly was born and raised here and after graduating from UTEP he became a prominent real estate and investment CEO. A graduate of Austin High School, he attended UTEP in the late 1950s when the university was known as Texas Western College. He had originally set his sights on becoming a doctor but instead decided on a business career. Malooly’s success garnered him UTEP’s 2013 Gold Nugget Award, which he received during UTEP’s 99th homecoming celebration in October.