Underground comedy on the border has its own jalapeño flavor

EL PASO – Everyone always enjoys a good laugh and at Coconuts Bar and Grill the staff invites amateur comedians to gather around every Tuesday to perform in the Underground Comedy Show. Comedians from El Paso differ from comics in other places, because the culture here nourishes a different type of humor, merging American and Mexican culture into an authentic border type of humor. Jerry Karnes who is known by his stand up name “El Malkreado” founded the show in April 2005 after a road trip to Austin where he visited a bar on 6th street called the Velveeta room. A comedy show was going on and the comedians were so bad, he said, that he started making fun of them. One of them told Karnes to do a better job if he could.

EL PASO – Beneath fluorescent lights Inside a noisy concrete room that smells of paint, Stephen Escarzaga, 24, works a computer mouse to rapidly transform the pictures inside his clients’ heads into a graphic logo, a print or a shirt. For six years, Escarzaga and his partner Jonathan Childress, 24, worked in a unique lifestyle that included screen printing, making music, shooting video and running the show at their printshop. But the Central El Paso business, Proper Printshop, will come to an end as they move on to pursue other career goals. The partnership began in May 2008 as they shared a Westside apartment.

AUSTIN – The smell of booze, sweat and vomit grow stronger as I get closer to 6th street, which is the city’s urban core located downtown that is historical and filled with entertainment in Austin, Texas.Nonetheless, the different types of people, the friends that surround me, the free shows and certain films that I want to see outweighs the repulsiveness of it. South by Southwest or as it is commonly known as SXSW is a set of film, interactive, and music festivals and conferences that take place early every year during March in Austin. I’ve gone every year since 2011 and I noticed that each year after that, the people have become more obnoxious because of the free alcohol that’s available practically in each venue. RSVPing is important in this festival, for example Fader Fort is an invite-only installation at SXSW that is a four-day party event that is sponsored by Levi’s and is, by far, the most popular because of the amount of famous people it brings. This year it brought Lady Gaga, Kanye West, Gorillaz and many more. 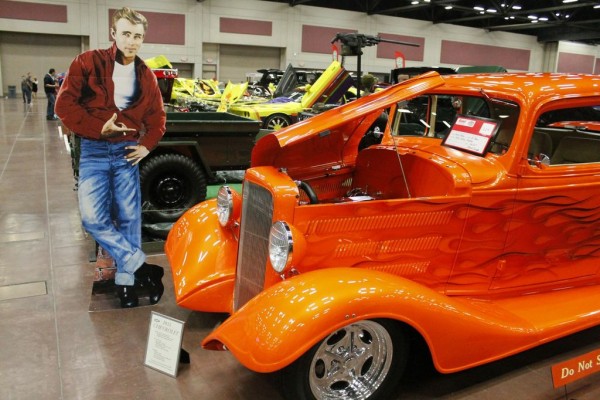 EL PASO – The aroma of leather, roasted almonds, and Carnauba wax fills the Convention center bringing to mind a vintage vision of sea foam green tank-sized cars sporting white walled tires.Spectators are awed by these metallic Mona Lisa’s and massive crowds have gathered here today to get a glance at them just like fine art lovers gather at the Louvre in Paris. The Autorama show brings in all different types of individuals from the same car-loving community to demonstrate the power and beauty of their automobiles. A multitude of enthusiasts fill the room and every audible conversation revolved around hot rods or muscle cars. “I’ve been building street rods ever since I was 14 and I always had to do that after work,” said Jerry Haley, a contestant at the Autorama and the owner of a 1933 Chevrolet Standard Six, which won Goodguys/Timberland Pro award in 2006 earning the Chevy the title of Homebuilt Heaven National Champion. His 1933 Chevrolet Standard Six, is an original car with a six-cylinder motor that he took apart and rebuilt into a real street rod with a tune-port fuel injection fast-burn 385 engine with overdrive.