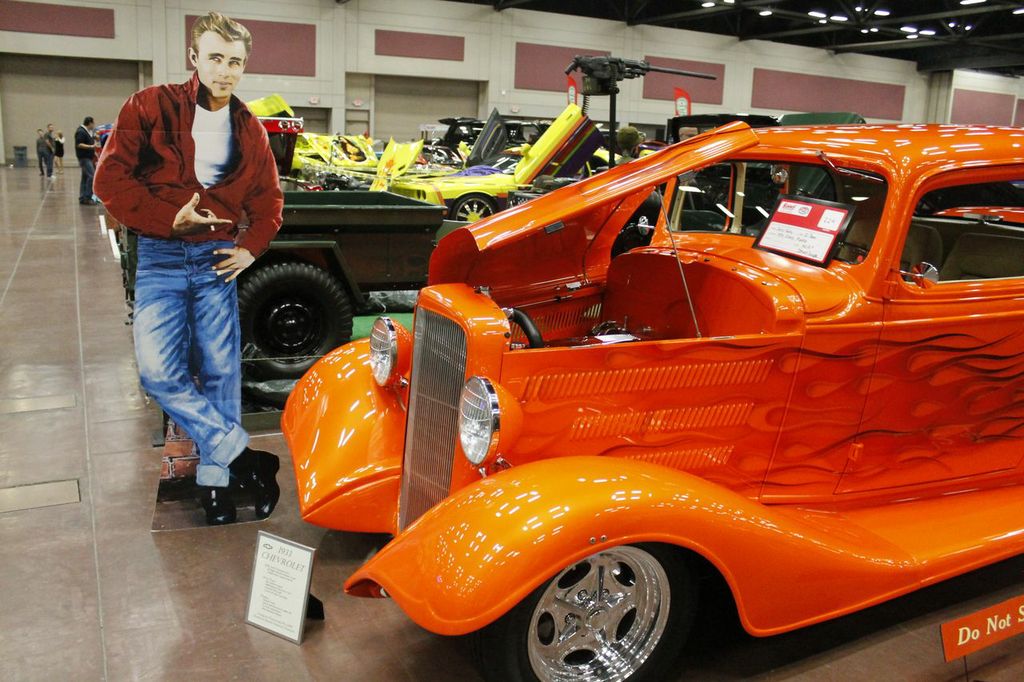 Jerry Haley's 1933 Chevrolet Standard Six, is an original car with a six-cylinder motor that he took apart and rebuilt into a real street rod with a tune-port fuel injection fast-burn 385 engine with overdrive. Photo credit: Andrea Vargas

Spectators are awed by these metallic Mona Lisa’s and massive crowds have gathered here today to get a glance at them just like fine art lovers gather at the Louvre in Paris.

The Autorama show brings in all different types of individuals from the same car-loving community to demonstrate the power and beauty of their automobiles. A multitude of enthusiasts fill the room and every audible conversation revolved around hot rods or muscle cars. Jerry Haley's 1933 Chevrolet Standard Six, is an original car with a six-cylinder motor that he took apart and rebuilt into a real street rod with a tune-port fuel injection fast-burn 385 engine with overdrive. Photo credit: Andrea Vargas

“I’ve been building street rods ever since I was 14 and I always had to do that after work,” said Jerry Haley, a contestant at the Autorama and the owner of a 1933 Chevrolet Standard Six, which won Goodguys/Timberland Pro award in 2006 earning the Chevy the title of Homebuilt Heaven National Champion.

His 1933 Chevrolet Standard Six, is an original car with a six-cylinder motor that he took apart and rebuilt into a real street rod with a tune-port fuel injection fast-burn 385 engine with overdrive.

According to Haley his 1933 Chevrolet can withstand anything and is safer then a new car, “it is considered the superman of the Chevrolet brand.”

Haley takes his car up to Colorado, Chicago, and Dallas to attend other car communities to share car insight with other owners. The Autorama car show is the only indoor car show of the year in El Paso. Contestants’ automobiles are safe from weather, theft and other problems. Photo credit: Andrea Vargas

The Autorama show has become a haven for people with a taste for distinctive cars, who come together to enjoy a weekend of what they love, regardless of the competition.

Every exhibitor in the car show is there to show-off and to appreciate other vehicles and the hard work that went into them.

The El Paso car show is different from other shows in the city, because it is the only indoor car show of the year. Contestants’ automobiles are safe from weather, theft and other problems.

Professional NASCAR racers judge the cars by their outer appearance, horsepower and other features.

“At times when my vehicle wins an overall best place it’s pretty rewarding, because you’re getting picked over muscle cars, new cars and pick-up trucks, so to me that would be a high reward,” Haley said.

A rare Shelby GT500 Super Snake, owned by Rick Hernández has won several 1st place awards and is number 44 out of potential 500, but due to limited production there are only 85 Super Snakes in existence. The Mustang Elite Club came together to help promote the Autorama organization. Rick Hernández has been part of the show since last year, and he came to see if anyone was exhibiting a car like his GT500 2013 Mustang, which won the top honor of Best in Show.

With the 850 horsepower, 6 – Speed manual transmission, Shelby/Ford Racing suspension, custom drive shaft, and one of a kind white performance white color and white stripes, Hernández felt that he would win first place in the show.

“She’s a beauty and a beast. She is beautiful when she’s sitting still but she is a beast when she gets up and goes,” said Hernández.

Carlos Maldonado, from the Mustang Elite Club entered his 2013 Mustang GT in the competition as well. Maldonado believes that with his complete kit, carbon-fiber intake, and his superhorse lubbers his Mustang GT can win the show.

”The Autorama show isn’t really about competing at the end, it is about coming together as a community and show our appreciation and respect with all the hard work that everyone has put into their cars,” said Maldonado.

Overall, the Autorama show brings car lovers in El Paso to show off all the hard work that they put into their cars and appreciate one another for going the extra mile and putting in the extra effort to show beautiful powerful automobiles.