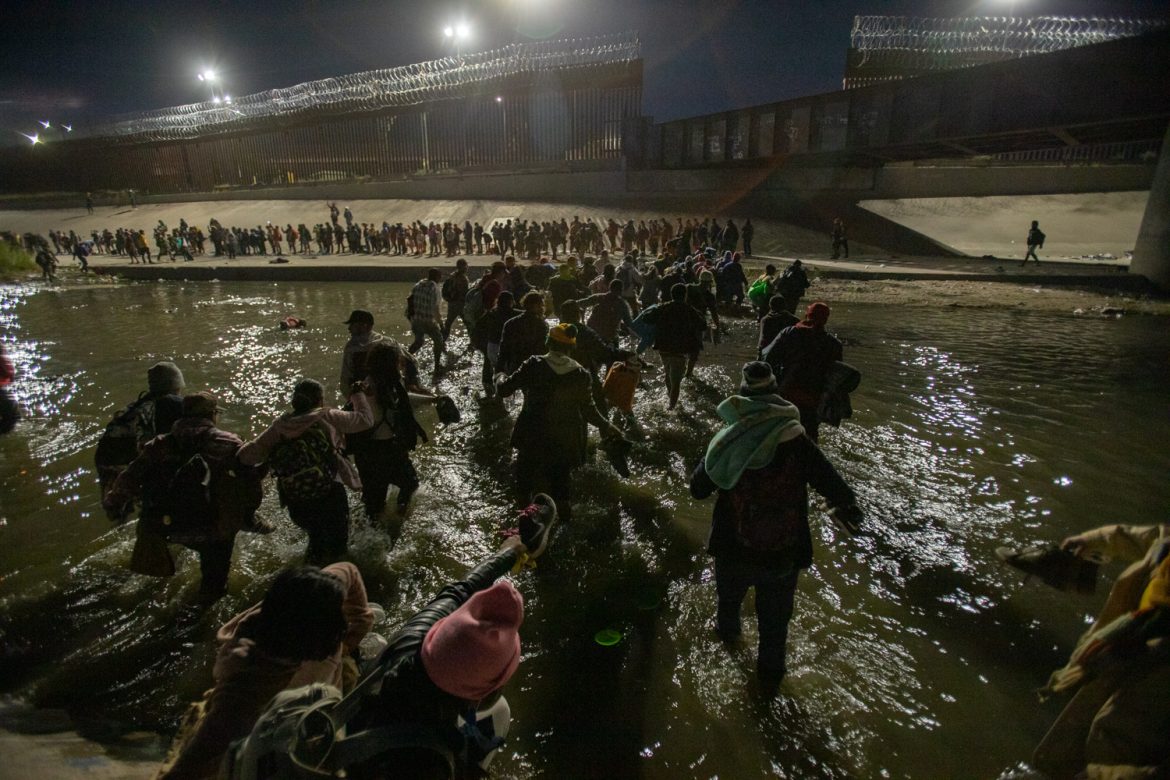 Migrants from Nicaragua, Peru and other countries wade into the river to cross to the United States, Sunday, Dec. 11. (Corrie Boudreaux/El Paso Matters)

Days after one of the largest migrant crossings in the region, U.S. Secretary of Homeland Security Alejandro Mayorkas visited El Paso on Tuesday, Dec. 13, where he met with local government and federal officials, as well as advocates who are responding to a recent influx of migrants

On Sunday night, more than 1,500 migrants waded across the Rio Grande from Ciudad Juárez into El Paso, with organizations scrambling to expand services for the newly arrived. With shelter beds at capacity, immigration officials released more than 600 people that weekend in Downtown El Paso. As temperatures drop this week, many recent migrants have begun sleeping at the airport and camping outside the Greyhound bus station until they can travel to their intended destination.

During their meeting, Mayorkas shared the challenges of working with a Congress that is deeply divided on immigration issues. In November, U.S. House Republicans visited a Border Patrol complex in El Paso to call for Mayorkas’ resignation.

Immigration has also become a lightning rod in local politics. City Rep. Claudia Rodriguez, who is in a runoff election, appeared on right-wing talk shows during her campaign to criticize the city’s spending on migrant services.

People should understand there’s going to be a large migration flow right now because Title 42 cut off access to asylum protections, leading to a backlog, Limón Garza said.

“It’s important to recognize people are in more harm’s way when we have policies like Title 42 in place,” Limón Garza said. “People need access to resources … or they become more vulnerable to nefarious actors and people who might want to abuse them.”

“Creating a more anti-immigrant sentiment is not helpful to anybody, especially as we see in our El Paso community what happens when that rhetoric is matched with violence,” she added, referring to the Aug. 3, 2019, terrorist attack.

Local officials and nonprofits expect border crossings to increase as the end of Title 42 nears. The emergency health order allowed the U.S. to immediately expel migrants, blocking them from their legal right to seek asylum. Title 42 is set to phase out by Dec. 21 after a federal judge ruled it a violation of the law.

On Sunday, Chihuahua State Police escorted hundreds of people to shelters in Juárez, where many of them then made their way to the Rio Grande. Many migrants dropped off at the Leona Vicario shelter were survivors of a Dec. 3 mass kidnapping in Durango, and feared getting trapped again.

Limón Garza said this is where Congress can do more – by increasing the amount of allocated funds through FEMA, the Federal Emergency Management Agency. FEMA fully funds the migrant services center located near El Paso International Airport, though officials expect to close it as soon as they secure a larger location, according to a Monday press release from the county.

In the past week the county has processed an average of 500 migrants a day, coming from Nicaragua, Cuba, Ecuador and Dominican Republic. The overwhelming majority of migrants processed since October have a sponsor living in the United States. Their most requested destinations include Florida, Texas and California.

Mayorkas also visited El Paso to meet with U.S. Customs and Border Protection workforce and review operations. His communications team did not respond to email or phone inquiries from El Paso Matters.