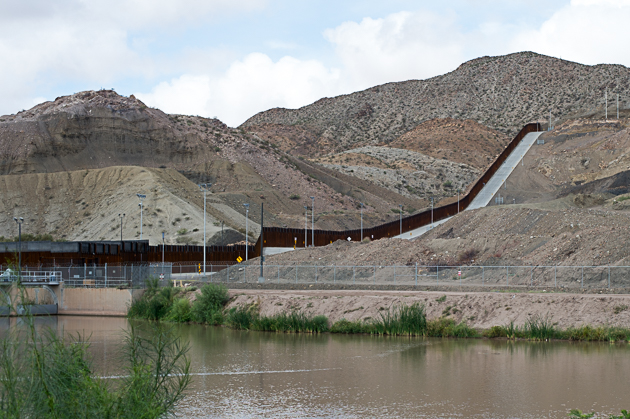 The We Build The Wall organization erected a half-mile bollard fence in 2019 in Sunland Park, N.M. near the border with Mexico and El Paso. Photo by Dino Chiecchi, Borderzine.com.

This story was originally co-published by ProPublica and the Texas Tribune.

Kolfage, a 40-year-old Air Force veteran, faces more than five years in prison after pleading guilty to defrauding donors of hundreds of thousands of dollars in donations to the wall effort. Despite the resolution of the criminal case, Kolfage and his We Build the Wall group still face a defamation suit brought by the National Butterfly Center, a nonprofit nature preserve in the Rio Grande Valley that he accused of promoting sex and human trafficking without evidence. In addition, the federal government has filed suit regarding one of his wall projects, alleging it was built in potential violation of an international treaty between the U.S. and Mexico.

ProPublica and The Texas Tribune reported in 2020 on severe erosion at the base of the 3-mile fence outside of Mission, Texas — the subject of a federal lawsuit — that experts said could result in the structure toppling into the Rio Grande if not fixed. The outlets also reported on Kolfage’s long history of online harassment and intimidation, which escalated with his border wall projects.

Controversy continues to surround the two physical legacies of Kolfage’s We Build the Wall effort: the bollard fence on the shore of the Rio Grande and a half-mile stretch of fence outside of El Paso.

The federal government has confirmed in court filings that the Rio Grande barrier remains at risk of falling and that it could potentially shift the international boundary. Government lawyers are negotiating a settlement in a lawsuit filed against the project. Based on court hearings, it could require wall builders to modify the barriers, such as adding gates to help prevent flooding, but appears unlikely to result in the removal of the fence that opponents seek.

An attorney for the construction company, Fisher Industries, denied the government’s allegations in his response to the complaint, according to court documents, and did not respond to a request for comment.

Separately, three years after construction of the fence outside of El Paso, Kolfage’s group has failed to fulfill federal requirements, including providing an operation and maintenance plan and evidence of financial responsibility for damage or injuries that can be caused by the structure.

According to the indictment in the fraud case, Kolfage repeatedly claimed that he would “not take a penny in salary or compensation” and that 100% of the funds raised would be used to execute the group’s mission. That’s not what happened, federal prosecutors alleged. The government accused Kolfage of using fake invoices and sham vendor arrangements to siphon more than $350,000 for personal expenses, including home renovations, a boat and a luxury SUV.

In addition to pleading guilty to one count of wire fraud conspiracy, Kolfage also pleaded guilty to tax crimes for failing to report that income. “I knew what I was doing was wrong and a crime,” Kolfage told the judge, according to news accounts of the hearing. He is due to be sentenced in September.

Three years after construction of the fence outside of El Paso, Kolfage’s group has failed to fulfill federal requirements, including providing an operation and maintenance plan and evidence of financial responsibility for damage or injuries that can be caused by the structure.

We Build the Wall board member and former Trump adviser Steve Bannon was accused of receiving more than $1 million through the scheme, according to the indictment. Trump pardoned Bannon during his final hours at the White House, meaning the federal criminal case against him could not proceed.

As part of his plea, Kolfage agreed to forfeit $17 million from the nonprofit. We Build the Wall is also required to give up more than $1 million in donations in a bank account, according to the plea agreement. Kolfage’s attorney in the federal fraud case, César de Castro, declined to comment. An attorney listed for We Build the Wall did not respond to a request for comment.

In a 2020 interview with ProPublica and the Tribune, Kolfage denied the possibility of wrongdoing. “How is there corruption?” Kolfage said. “It’s privatized. It’s not federal money.”

We Build the Wall was an influential conservative nonprofit that grew out of a GoFundMe campaign started by Kolfage in 2018. The group pivoted to soliciting donations to build private barriers after learning it couldn’t donate directly to the federal government to help Trump build a wall along the southern border. By mid-2020, it had raised more than $25 million.

According to court filings, Kris Kobach, the former Kansas secretary of state and general counsel for We Build the Wall, said in 2019 that the group was only a “passive” investor in the Mission fence, having provided about 5% of the total cost, and wasn’t involved in the planning or design. It was dropped from the lawsuit. Still, We Build the Wall continued to promote the project on its website as one of two completed projects supporters could even tour, at least as of Dec. 31, 2021.

“This project goes to show you how We Build The Wall’s movement to unite Americans who share a common belief in border security has grown into a larger movement of privatized wall builders,” it posted on its website next to pictures and a description of the project.

After ProPublica and the Tribune exposed erosion issues at the site, Trump tried to distance himself from the private effort, speculating on Twitter that it was built to make him look bad. Yet just a few months earlier his son Donald Trump Jr. had endorsed We Build the Wall, calling it “private enterprise at its finest.” Kolfage himself had bragged of having a direct connection to the White House through Bannon and Kobach.

Born in Michigan and raised in Hawaii, Kolfage joined the Air Force. In 2004, two weeks into his second deployment to Iraq, a rocket exploded a few feet from him, severing both of his legs and his right hand.

The Purple Heart recipient recovered after undergoing 16 surgeries in six months, and he often spoke publicly about his experience, becoming the face of resilience and perseverance.

He soon began running a number of right-wing websites and Facebook pages that he claimed earned him as much as $200,000 per month, according to text messages reviewed by ProPublica and the Tribune. The sites included sensationalized, photoshopped and in some cases fabricated content, and several were shut down by Facebook for “inauthentic activity” in 2018. Kolfage was accused of online bullying and personal attacks, and he formally apologized to a perceived online critic as part of a court settlement.

Upon his arrival in Texas, he targeted local opponents in the Rio Grande Valley, including a prominent Catholic priest and the National Butterfly Center. Both had previously opposed the federal government’s plan to build fencing through their property. On social media, Kolfage declared that the center “openly supports illegal immigration and sex trafficking of women and children.” Social media messages calling staffers “pigs,” “pathetic filth” and “traitors” poured in. “You will be made to pay,” one Facebook follower declared in a message.

The butterfly center filed a defamation lawsuit against Kolfage and We Build the Wall in 2019, as well as Fisher Industries and the property owner who provided land for the fence, claiming that their supporters had “begun to engage in targeted harassment.”

Kolfage, who has not been served with the suit, has not responded to the allegations. An attorney for Fisher Industries has denied the allegations in court filings.

Kolfage’s arrest in 2020 did little to quell the harassment, said the butterfly center’s executive director, Marianna Treviño-Wright, as the site became a rallying point for border wall supporters, including out-of-state political candidates.

In late January, a right-wing congressional candidate from Virginia, Kimberly Lowe, visited the nature preserve. Treviño-Wright said Lowe demanded the center give her and another woman access to the river “to see all the illegals crossing on the raft.” Treviño-Wright said Lowe or her companion tackled her when she asked Lowe to leave the premises, a physical altercation captured on audio. Treviño-Wright said she filed a complaint against Lowe with the Mission Police Department, which did not return calls for comment.

Lowe accused Treviño-Wright of filing a false police report and pushing a “false news story” and claimed she, not Treviño-Wright, was the one assaulted during the altercation in a statement to ProPublica and the Tribune.

“I think we will all be on guard for a long time,” Treviño-Wright said. “I don’t know that it’s possible to experience what we have and not, you know, be changed by that.”

Kolfage’s guilty plea did not end his defiant social media posture on the right-wing microblogging site Gettr, where he has a verified account after having been banned from Facebook and deactivating his Twitter account. On the day after he entered his plea, he posted a screenshot of a Gateway Pundit story crediting him with building more border wall than Presidents Barack Obama or Joe Biden. His pinned post reads “They Michael Flynn’d me,” an apparent reference to the former Trump national security adviser who pleaded guilty to lying to the FBI over contacts with Russian officials. Flynn was subsequently pardoned by Trump.

In the comments section, supporters told Kolfage he deserved a “medal” and thanked him for “everything you’ve done.”