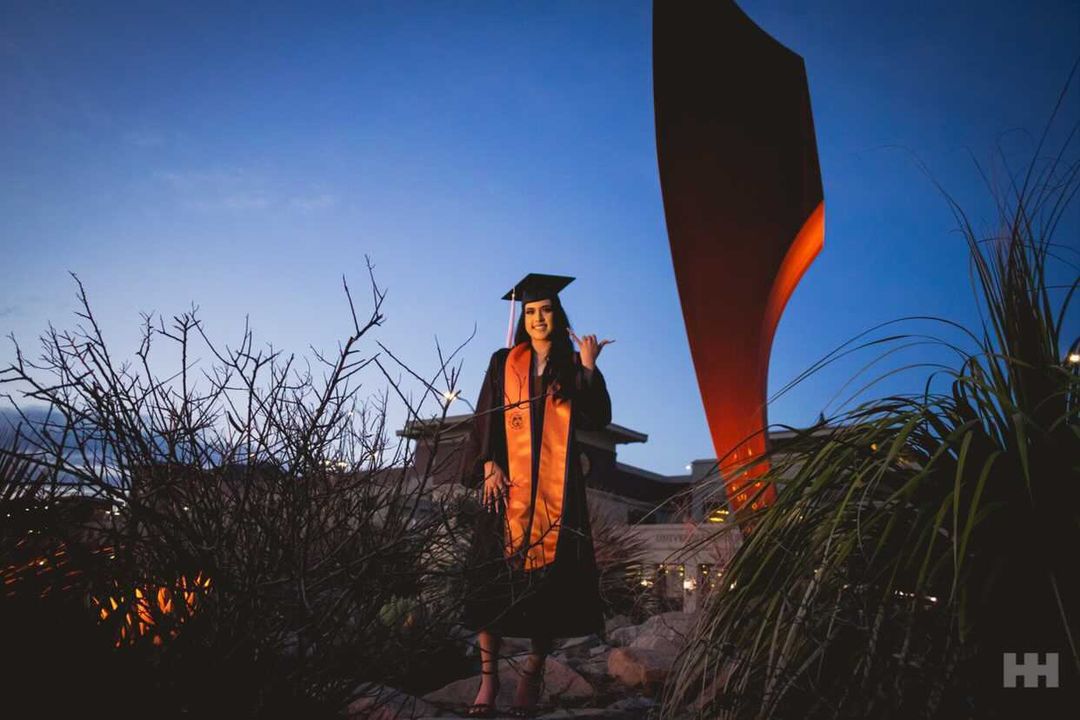 Elsa Barrientos posing for her graduation photo on the University of Texas campus in 2020. She's looking forward to attending her graduation ceremony this spring after it was delayed due to the pandemic.

After more than a year of remote classes and cancelled graduation ceremonies, students at the University of Texas at El Paso are excited about commencement.

At the end of March 2021, students got the news UTEP would have an in-person ceremony for graduates of the class of 2020 and the class of 2021 at the Sun Bowl Stadium on Friday, May 14 and Saturday, May 15.

Many of those who will take part in commencement are the first in their families to graduate from a university.

“I’ve always wanted to walk across the stage and, just you know, have that special moment, saying that I did it and I made it,” said Deante Michelle Sears, a first-generation student.

Sears, 30, earned a bachelor’s degree in education. It’s meaningful for her family because she will be able to find better job opportunities in the future and be a good example for her daughter, Sears said.

Her family lives in Virginia and won’t be able to attend the ceremony because of the cost of last-minute traveling expenses. She says her family is very proud of her accomplishments and she will capture the moment to share with them.

“I’ll have pictures I can send, and I’ll be able to have video that is recorded. So, even if they can’t physically be here to support me and see, they will be able to see me online or through video,” Sears said.

Yomaira Gonzalez, 26, graduated last spring. She earned bachelor’s degree with a double major in psychology and criminal justice. She was disappointed when pandemic restrictions forced UTEP to cancel commencement.

“Last year I was like, it’s finally my moment, I can shine,” Gonzalez said.

Now she’ll attend a the commencement ceremony with the class of 2021. Even though it’s a shared ceremony, she’s excited. She is a first-generation college graduate who wants to make her parents proud, especially her father, who was diagnosed with cancer.

“I want to show him that I actually walked the stage, to see that his daughter actually had the education that he didn’t have. For me is something that I wanted to show him,” Gonzalez said.

Astrid Elsa Barrientos, 23, is also a 2020 graduate attending the commencement ceremony this year.

Barrientos earned a bachelor’s degree in criminal justice and is the first in her family to complete a college education. She also missed her commencement ceremony and is glad that one is happening this year.

“I was really really sad when they postponed it in December because I already have my diploma but it feels more real walking across the stage,” Barrientos said.

Her parents, twin sister and a younger brother will attend commencement. “I’m very proud. Very very proud,” said her mother, Maribel Barrientos. “She strives for the best, and whatever she puts her mind to she gets to it, and that is what I admire about her. And I love that about her.”

The university initially announced that each graduating student could only take two guests, but later expanded the number to a total of eight guests per student. The decision was made after carefully reviewing the level of COVID-19 cases in El Paso and the number of students who had confirmed they planned to participate in the ceremonies according to UTEP.

“Our 2020 and Spring 2021 graduates have worked hard to earn their degrees, and their achievements deserve to be celebrated with their loved ones,” said UTEP President Heather Wilson in a statement released by the university.

According to University officials, 3,812 students had sent an RSVP to attend the ceremonies as of April 22.

Social distancing between family groups will be in place and face masks will be required. Hand sanitizing stations will be set up and Sun Bowl seating capacity will not exceed 50%, even if every graduate brings eight guests, according to a recent press release from UTEP.

Students will not have physical contact or shake any hands with anyone as they walk the stage but they will have the opportunity for photos of the proud moment.

Families will watch from the stands, eager to share the milestone that many missed last year and now happily celebrate.