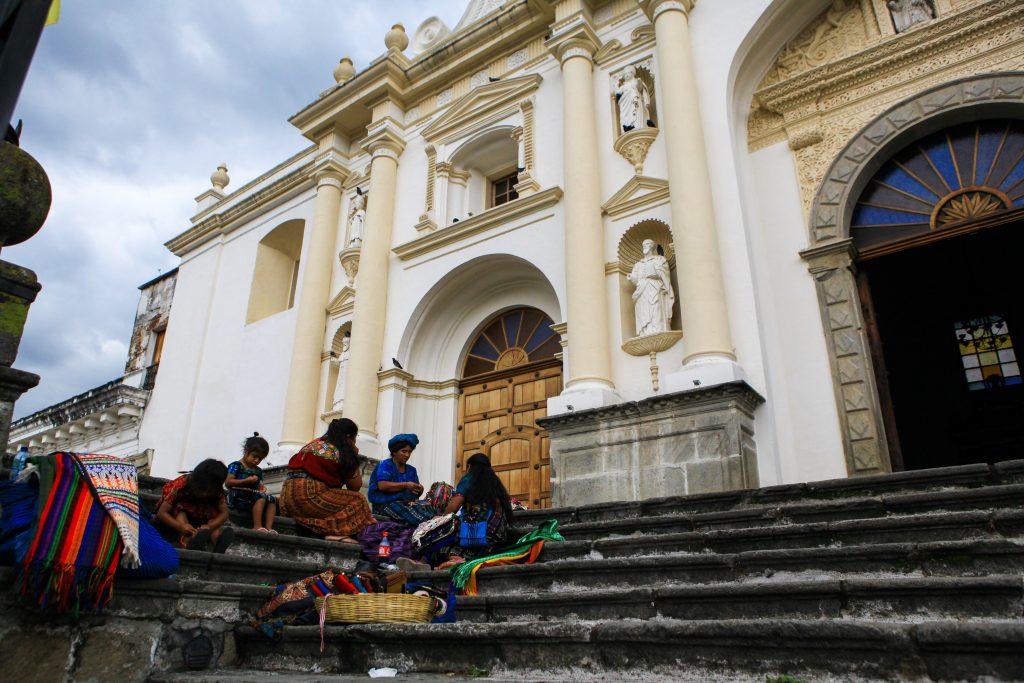 Indigenous women in Antigua, Guatemala, work on textiles that will be sold to tourists. (Corrie Boudreaux/El Paso Matters)

Running children and crying babies create a cacophony at El Buen Samaritano shelter, but in a far corner, Carmela holds her 2-year-old in silence. She can’t communicate with anyone — she doesn’t know Spanish, and no one at the facility can understand the Indigenous language she speaks.

All names of migrants in this article have been changed to avoid potential harm.

Carmela, 26, is from Santa Maria Nebaj, a mountain town in the Guatemalan department of El Quiche. Her native language Ixil is one of at least 24 Indigenous languages in Guatemala, a nation with a population that is nearly 50 percent Indigenous.

Many of the challenges faced by Indigenous Guatemalan migrants would apply to Indigenous migrants from Nicaragua, El Salvador, Honduras, or Mexico, although Indigenous peoples are not a uniform group and experience varying challenges based on local context and culture.

“All I want is to have a house, to raise my kid — I want him to go to school. I was never able to go to school because my mom did not have the money for it,” said Ingrid, a 19-year-old from San Andrés Sajcabajá. Her native language is Kʼiche.

Due to the economic hardships of her family, Ingrid never received a formal education. Ingrid has been learning Spanish on her own to prepare for her journey to Massachusetts, where her aunt has lived for two years.

With tears in her eyes, Ingrid recalled how a man from her village “tried to do bad things to (her),” but she never reported the incident to the Guatemalan authorities out of fear of retaliation against her family.

“Any change in the weather, any change in the quality of the land … is going to affect (Indigenous people) immensely,” said Selfa Chew-Melendez, a professor at the University of Texas at El Paso whose advocacy and academic work involves Indigenous immigrants.

When catastrophic hurricanes hit Guatemala in 2020, Indigenous communities were largely left to fend for themselves with minimal governmental assistance. Huge numbers of Guatemalans were displaced due to destructive Hurricane Eta, and entire Mayan villages were buried in mudslides.

Chew-Melendez said past U.S. foreign policy in Central American countries plays a role in the trajectory of migration from those countries.

“The history of intervention of European countries and the United States makes possible that connection, through which Indigenous persons realize that it’s going to be easier for them to make that journey,” she said.

State-led genocidal violence against Guatemalan Indigenous communities in the 1980s — in which more than 200,000 people were killed — was linked to funds and military training from the United States.

“If we look at in the case of Guatemala with the genocide and the internal armed conflict, those are some of the newest root drivers of forced migration. Everything that came after that, (the) lack of educational opportunities — some of the places that were decimated because of massacres never bounce back,” said Juanita Cabrera Lopez, executive director of the Mayan League with Maya Mam Indigenous heritage.

The U.S. continues to be significantly involved in Guatemalan affairs, with a recent announcement that the U.S. Department of Homeland Security will provide training for Guatemala’s border security task force.

“A lot of people (immigrating to the U.S.) now are the children and grandchildren of those who were coming in the ‘80s and ‘90s fleeing decades of civil war. That’s a very recent history,” said Leah Rodriguez, an attorney with Texas Rio Grande Legal Aid who focuses on improving language access for Indigenous asylum seekers.

This is the case for Ingrid’s family. Her father moved to the United States shortly after she was born. Almost 20 years later, she is following the same path, looking for a better future for her son.

In Mayan communities in Guatemala, illiteracy rates among adults reach as high as 33 percent. Ninety percent of Mayan children never graduate from high school and Mayan women are less likely to attend school than men.

Rural schools often lack the resources to educate children, spaces are limited and students are rarely taught Spanish. With the lack of formal education and skills to achieve higher paying jobs, the cycle of poverty and migration continues.

It’s important to note that Indigenous communities are educated, just in a completely different modality from that of Western formal education. The needs of agrarian communities and cultural norms of Indigenous peoples necessitate broad-ranging education in varied applied skills and environmental understandings outside the scope of what would typically be part of a formal Western education.

“When the Indigenous language speakers only have received a very low formal education, they cannot communicate or find a job. But this is not because they are ignorant. They are very smart people, they have a lot of knowledge but inside of their own culture,” said Sergio Romero, a linguist and professor at the University of Texas at Austin who studies Indigenous languages.

Similar to Guatemalans, Mexican Indigenous people face a long history of discrimination. Their formal educational opportunities are limited. In 2020, El Instituto Nacional de Estadística y Geografía (INEGI) conducted a survey across the country that found 24 percent of Indigenous people experienced at least once an act of discrimination against them because of their appearance or skin color.

Since Mexican Indigenous people have legal status in the country they are not as vulnerable when traveling through Mexico as Central American migrants. With most having greater fluency in Spanish, Mexican Indigenous people only encounter difficulties related to the language barrier once they reach U.S. territory, said Monica Lima Aguilar, legal representative at the Attention Center for the Families of Indigenous Migrants (CAFAMI in Spanish).

“We know that there is some level of discrimination because they are undocumented in the United States, but they face a double discrimination for being labeled in different ways as Indigenous people,” she said.

In October 2020, Alma and her son Salvador left their home in Caserio La Bendición, a rural community in the Sayaxche municipality of Petén in Guatemala. They traveled for two weeks across Mexico. Along with a few other migrants, they paid a smuggler to take them to the United States border in a van.

The journey was long and the temperature inside the vehicle rose to extreme levels.

“There was no air (in the vehicle) and he couldn’t take it,” the mother said about her 13-year-old son. “He fainted and I feared he was about to die, but thank God he was OK.”

Other migrants aided Alma and Salvador with water and the few medications they had available. That night Alma and her son prayed to God.

“There was this young man who got left behind at a warehouse where we spent the night,” Alma said, adding that he didn’t speak Spanish well.

The Guatemalan migrant spoke K’ekchi’, the same language as her, and was abandoned by the smuggler who claimed he didn’t pay the full price for the trip. He argued in K’ekchi’, but his limited communication skills in Spanish made it difficult to fight back or for the smuggler to listen.

“They just left him there. They said he didn’t pay, he said he did but I don’t know,” Alma recalled at the shelter, looking down to her feet and lowering her tone. “They often take advantage of anyone they can.”

When crossing Mexico to reach the United States, Central American migrants are susceptible to xenophobic discrimination, but Indigenous migrants are even more vulnerable and are frequently targetted by scammers. In the case of Indigenous women, they are also targetted for sexual abuse and rape, said Sergio Luna, director of the shelter La Sagrada Familia in Tlaxcala, Mexico.

Luna said that the most prominent challenges experienced by Indigenous migrants at the shelter are related to language barriers and lack of Western education.

Without Spanish language skills, Indigenous migrants face barriers to accessing public and health services that they need, picking up packages that their families send to them and finding informal jobs to get them through their travel.

“Most of the time they endure pain or illnesses that they have,” Luna said about the migrants who cannot communicate their needs. “They don’t know how to read, how to write, and then you add the language challenges, so the vulnerable conditions and difficulties keep getting bigger and bigger.”

The La Sagrada Familia shelter is adjacent to a stop on “La Bestia (The Beast),” a web of train routes that serves migrants as a clandestine form of transportation. More than 90 percent of the migrants who reach the shelter in Tlaxcala are from Honduras, while Guatemalans take second place with 5 percent, Luna said.

Even as the shelter sees a large influx of Honduran migrants who are not from Indigenous communities, the director has noticed a tendency of Indigenous Central Americans being convicted of misdemeanors in Mexico.

“We’ve encountered cases in which they’re accused of committing an administrative fault or crime. They don’t have the ability to defend themselves or to argue their way out of these situations,” Luna said, adding that they’re often left to fend for themselves.

Luna has noticed tendencies to segregate among the migrant population at the shelter, and observed that some of the nationalities have a “superior place in a hierarchy.” While Nicaraguans and Salvadorans seem to have a higher status, he considers Guatemalans to be the most marginalized.

“They receive a certain stigma because of their conditions of poverty and indigeneity,” Luna said, adding that he notices discrimination based on skin color, height and complexion.

After the long and dangerous journey from Guatemala across Mexico, Indigenous migrants face similar barriers at the U.S.-Mexican border.

Cover photo: Indigenous women in Antigua, Guatemala, work on textiles that will be sold to tourists. (Corrie Boudreaux/El Paso Matters)